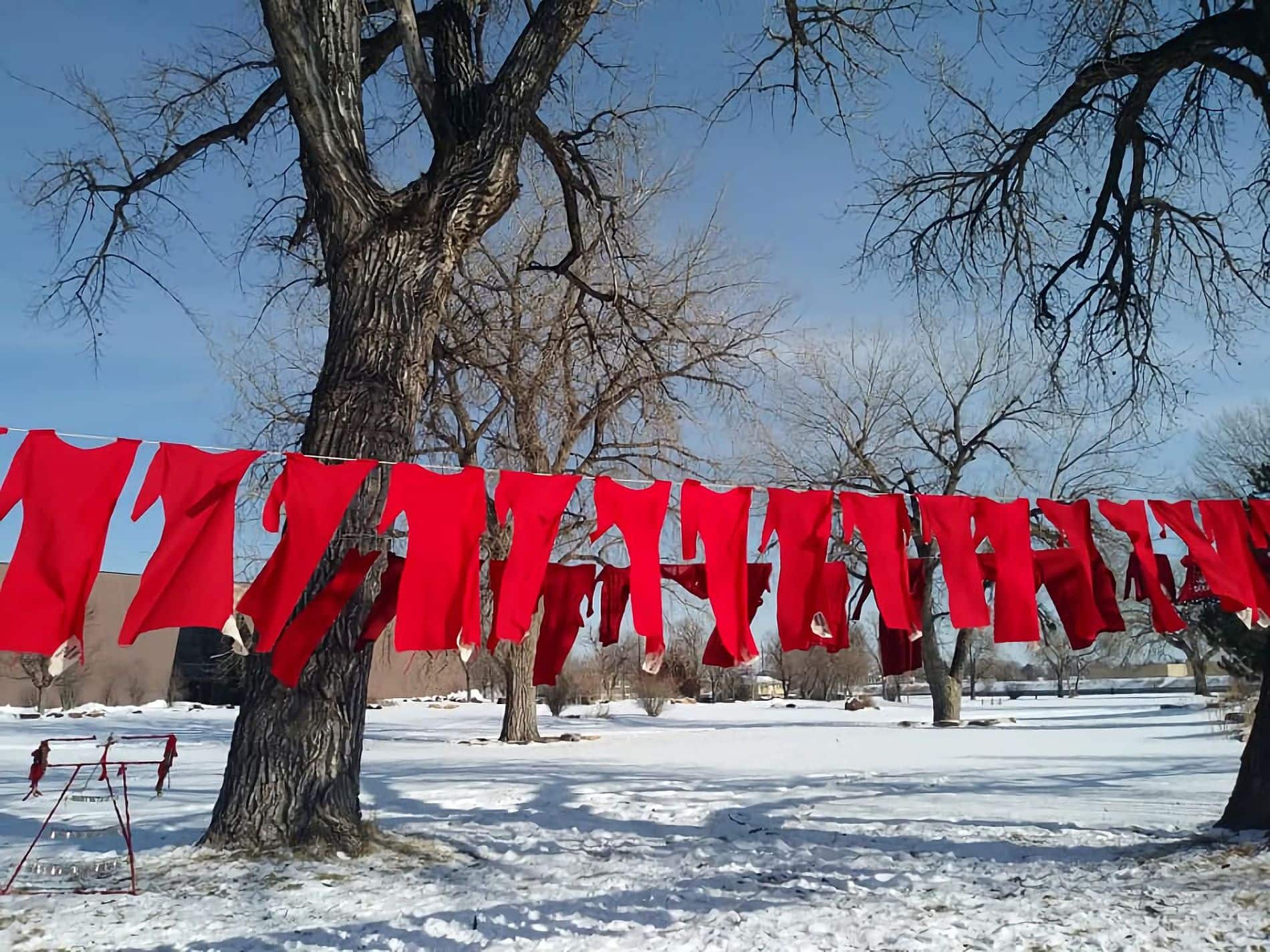 Dresses in the installation are for missing and murdered indigenous women and children, including at least one of age three. COURTESY / Mary Black Bonnet
Support our journalism. Become a Patron!

RAPID CITY – When Sandy Swallow presented a carefully folded red dress to Mary Black Bonnet one cold day this winter, friends who were with them learned that the dress would be one of 70 at an exhibit to honor missing and murdered indigenous women.

The installation of red dresses, each with an alleged South Dakota crime victim’s nametag, has been mounted in the cottonwoods outside the Journey Museum since Feb. 10, in the two-week kickoff of the “WHY Campaign.”

The kickoff culminates in a Feb. 24 multi-media performance here at the museum, aimed at healing, comforting survivors of violence, raising awareness of injustice, and achieving equitable public safety enforcement.

Swallow, Black Bonnet, and the other members of the Red Ribbon Skirt Society of the Black Hills, who conceived the commemoration, labelled the dresses and draped them from the trees so people can see them from Omaha St.

They planned to move the installation inside on Feb. 24, to be part of their finale presentation, consisting of poetry-reading, talks, photographic documentation, music, treats, and unveiling of the original artwork “Why” by Jim Yellowhawk.

Swallow’s dress symbolizes the 1968 murder of her sister, who she said she also will represent with an original verse at the event.  An excerpt:

“Donna Swallow May your name never be forgotten. Strong Lakota woman. Big sister guiding and protecting me. Advising me on life. Donna Swallow your life was not easy, you didn’t complain. Or show your bruises and pain.”

Black Bonnet, author of the poetry book Here There Be Dragons, said she will read some of the work she wrote especially for the upcoming occasion, which includes a found-word introduction to an artbook for guests to sign.

“It is dedicated to those still trapped and those who’ve passed,” she says. “You are always in our hearts.”

Black Bonnet is particularly sensitized to the campaign issues after surviving her own rape and battery. A part of her went missing in the incident unresolved by law enforcement, she acknowledges. “Doing this project has been very triggering for me,” she told Native Sun News Today.

“I feel so grateful in so many ways that I’m still here and that I didn’t disappear. The whole situation could have been so different.”

Yet, addressing the issue was not new to Black Bonnet. She had long since been alarmed by the losses of family members on her Rosebud Sioux Indian Reservation.

She recalls the unresolved case of 11-year-old Richynda Robideaux, who went missing from a Rosebud family home 22 years ago and was found murdered. “It was horrific to me. I learned about the power of silence. I felt like someone had the answers, but they weren’t giving them.”

She urges family members of every age to be alert, to take responsibility for their own safety and each other’s, but without becoming paranoid. “We have to work out a balance between fear and a healthy awareness,” she said.

“What I want people to think about, when they see this as just a women’s or an Indian issue, is that everyone is related to a woman somehow in some way in their lives,” she added.

Victims of unpunished violence are all too often children and teens, she noted. Some of the dresses in the installation are for them, including at least one of age three.

Another part of the spectrum lost are women who are “strong, spirited, and don’t keep their mouths shut.” They are victimized “because some people don’t like it when you point out the truth, or discrepancies or things that are wrong,” she said.

She cites Anna Mae Aquash, a Miq’mak native activist and 30-year-old mother of two, who spoke truth to power. After her disappearance in 1975, her body, with a bullet hole in the back of her head, was found on the frozen ground of Pine Ridge Indian Reservation. Posthumously, her family discovered her hands severed. Not until three decades later were suspects’ trials concluded.

It was the disappearance of Savanna Greywind that spurred nationwide advocacy and media coverage for all such victims and their survivors — after her Fargo, North Dakota neighbor pleaded guilty to killing her in a fetal abduction two years ago.

Black Bonnet cries when she talks about it.  Greywind, whose body was found in a river, “was loved by many people; she had a husband who loved and supported her and was there for her baby.” The baby was reunited to be raised by the father but will not know her mother.

The tragedy is also “a success story” in that “it caused change to happen,” Black Bonnet comments. “It was probably the first funeral that went down the streets of North Dakota that honored an Indian woman,” she said.

It also highlighted the fact that not all perpetrators are men, and it provided the impetus for the so-called Savanna’s Act in Congress, aka S. 227, “To direct the Attorney General to review, revise, and develop law enforcement and justice protocols appropriate to address missing and murdered Indians, and for other purposes.”

Re-introduced in the U.S. Senate on Jan. 24 in order to fortify terms, it explains why indigenous populations need additional protections, noting that Congress finds:

Bleak as the statistics may be, the recently formed Sovereign Bodies Institute claims the numbers represent grave under-reporting. “A complex maze of jurisdictional policies and institutionalized violence means much of this violence is not only not addressed, but not documented,” says the institute created by Southern Cheyenne doctoral student Annita Lucchesi.

A survivor of domestic and sexual violence, Lucchesi has filed hundreds of Freedom of Information Act requests to gather reports or expose the lack of them.

The Red Ribbon Skirt Society of the Black Hills is linked into her “Missing and Murdered Indigenous Women Database”. Members hope community supporters will join in helping them expand the coverage, with the goal of promoting parity in the justice system.

They would like to see the kind of community and law enforcement response afforded to the non-Indian Black Hills 9-year-old Serenity Dennart, whose disappearance from a group home for troubled youth Feb. 9 had stirred a weeklong multi-agency search with dogs, helicopters, ground crews and daily media coverage by press time.

“Not once has anybody come out in that kind of droves to look for an Indian woman or child,” Black Bonnet lamented. “It’s the principal of the matter, saying without saying that one life is worth more than another, and that’s not true obviously.”

The cases the Red Ribbon Skirt Society has collected so far are an incentive for the South Dakota Legislature. HB1237 and HB1238, which improve data sharing and law enforcement training on the issue, unanimously passed out of a House committee on Feb. 13, and join companion legislation approved in a Senate committee.

On Feb. 14, advocates held a march in Rapid City, coinciding with similar actions around the country. They said the presentation at the Journey Museum will be admission-free, including refreshments, from 2 to 3:30 p.m.

For more information on the “WHY Campaign” dedicated to the Missing and Murdered Indigenous Women, Children and Two-Spirited of Turtle Island, contact the Red Ribbon Skirt Society’s Lily Mendoza via lilym@rap.midco.net.