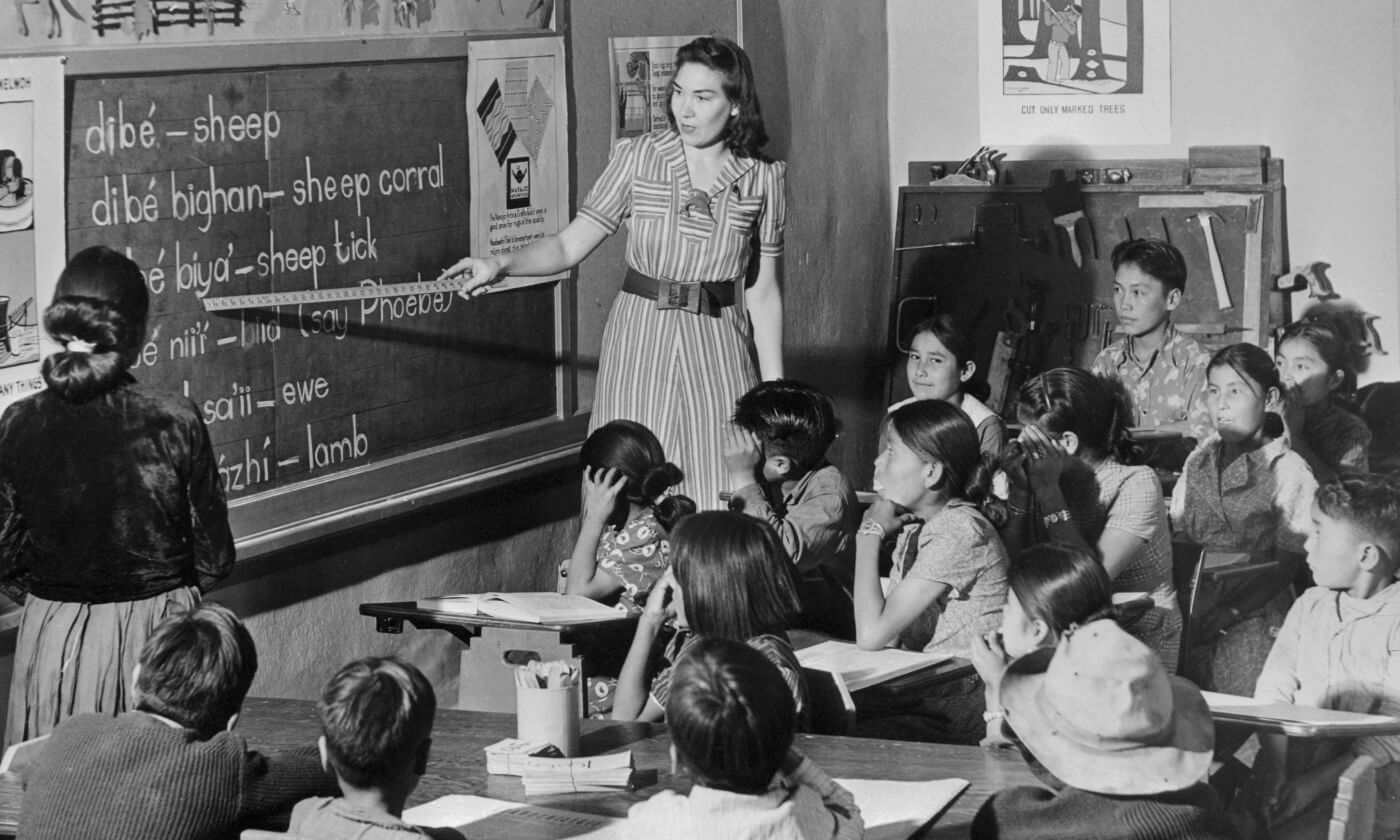 More than a century ago, the last fluent speakers of Wôpanâak passed away. Now this school is working to revive the language.
In the 19th century, federal policy shifted from a policy of extermination and displacement to assimilation. The passage of the Civilization Fund Act in 1819 allocated federal funds directly to education for the purpose of assimilation, and that led to the formation of many government-run boarding schools. Photo by Bettmann/Contributor/Getty Images.
Support our journalism. Become a Patron!

The threat of extinction that faces the Wôpanâak language is not uncommon for indigenous languages in the United States. Calculated federal policy, not happenstance, led to the destruction of Native American languages such as Wôpanâak.

But today, Native language schools are working to change that by revitalizing languages that have been threatened with extinction.

In the 19th century, federal policy shifted from a policy of extermination and displacement to assimilation. The passage of the Civilization Fund Act in 1819 allocated federal funds directly to education for the purpose of assimilation, and that led to the formation of many government-run boarding schools. Boarding schools were not meant to educate, but to assimilate.

Tribal communities continue to be haunted by this history. As of April, UNESCO’s Atlas of the World’s Endangered Languages listed 191 Native American languages as “in danger” in the United States. Of these, some languages are vulnerable—meaning that children speak the language, but only in certain contexts—to critically endangered—meaning the youngest generation of speakers are elderly.

Today, the education system in the United States fails Native American students. Native students have the lowest high school graduation rate of any racial group nationally, according to the 2017 Condition of Education Report. And a 2010 report shows that in the 12 states with the highest Native American population, less than 50 percent of Native students graduate from high school per year.

By founding schools that teach in Native languages and center tribal history and beliefs, tribal language schools are taking education back into their own hands.

On the Massachusetts coast just two hours south of Boston is Mukayuhsak Weekuw, a Wôpanâak language preschool and kindergarten founded in 2015. The school is working to revitalize the Wôpanâak language. As one of the first tribes to encounter colonists, the Mashpee Wampanoag faced nearly four centuries of violence and assimilation attempts; by the mid 19th century, the last fluent speakers of Wôpanâak had died.

In the 1990s, Wampanoag social worker Jessie Little Doe Baird began to work to bring the language back to her people. It began like this: More than 20 years ago, Baird had a series of dreams in which her ancestors spoke to her in Wôpanâak. She says they instructed her to ask her community whether they were ready to welcome the language home.

She listened, and in 1993 she sought the help of linguists and community elders to begin to revitalize the language—elders like Helen Manning from the Aquinnah Wampanoag Tribe, with whom she would later co-found the Wôpanâak Language Reclamation Project.

Baird found a lot of resources. To translate the Bible, colonists had transcribed Wôpanâak to the Roman alphabet in the 1600s, which the Wampanoag used to write letters, wills, deeds, and petitions to the colonial government. With these texts, Baird and MIT linguist Kenneth Hale established rules for Wôpanâak orthography and grammar, and created a dictionary of 11,000 words.

In 2015, the Wôpanâak Language Reclamation Project was ready to open the Mukayuhsak Weekuw preschool. According to the school’s Project Director Jennifer Weston, 10 students attended in the first year it opened, growing to 20 in the current school year. As part of the language program, parents or grandparents of students at the school are required to attend a weekly language class to ensure that the youth can continue speaking the language at home.

The curriculum is taught entirely in the Wôpanâak language, and it is also grounded in tribal history and connection to the land. “Our languages embody our ancestors’ relationships to our homelands and to one another across millennia,” Weston says. “They explain to us to the significance of all the places for our most important ceremonies and medicines. They tell us who we are and how to be good relatives.”

In addition to language learning, the children also learn about gardening, hunting, and fishing. They practice tribal ceremonies, traditional food preservation, and traditional hunting and fishing practices. At Native American language schools like Mukayuhsak Weekuw, students experience their culture in the curriculum in a deeply personal and empowering way.

Federal policies are often misaligned with the reality of tribal communities and language revitalization schools. Leslie Harper, president of the advocacy group National Coalition of Native American Language Schools and Programs, says schools often risk losing funding because they lack qualified teachers who meet federal standards. But these standards are paternalistic, notes Harper, who says that fluent language teachers at Native schools are often trained outside of accredited teaching colleges, which don’t offer relevant Native language teaching programs. These teaching colleges don’t “respond to our needs for teachers in Indian communities,” she says.

In Hawai’i, ‘Aha Pūnana Leo schools have had some success in overcoming policy barriers like these. The schools have led the way for statewide and national policy change in Native language education.

When the first preschool was founded in 1984, activists estimated that fewer than 50 children spoke Hawaiian statewide. Today, ‘Aha Pūnana Leo runs 21 language medium schools serving thousands of students throughout the state, from preschool through high school. Because of this success, emerging revitalization schools and researchers alike look to ‘Aha Pūnana Leo as a model.

Nāmaka Rawlins is the director of strategic collaborations at ‘Aha Pūnana Leo. Like Harper, she says that required academic credentialing burdened the language preschools, which relied on fluent elders. This became an issue in 2012 when kindergarten was made compulsory in Hawai’i, and teachers and directors of preschools were required to be accredited. But she, along with other Hawaiian language advocates, advocated for changes to these state regulations to exclude Hawaiian preschools from the requirement and instead accredit their own teachers as local, indigenous experts. And they succeeded. “We got a lot of flack from the preschool community,” she says. “Today, we provide our own training and professional development.”

One of the early successes of ‘Aha Pūnana Leo was removing the ban on the use of Hawaiian language in schools, which had been illegal for nearly a century. Four years later, in 1990, the passage of the Native American Language Act affirmed that Native American children across the nation have the right to be educated, express themselves, and be assessed in their tribal language.

But according to Harper, progress still needs to be made before NALA is fully implemented by the Education Department. Since 2016, Native American language medium schools have been able to assess students in their language. This took years of advocacy by people like Harper, who served on the U.S. Department of Education’s Every Student Succeeds Act Implementation Committee and pushed for the change.

While this is an important first step, Harper is concerned that because language medium school assessments must be peer reviewed, low capacity schools—or those that lack the technical expertise of developing assessments that align with federal standards—will be burdened. And the exemption doesn’t apply to high schools.

Studies from multiple language revitalization schools have found that students who attend these schools have greater academic achievement than those who attend English-speaking schools, including scoring significantly higher on standardized tests. “We are beginning to see the long-term benefits of language revitalization and language-medium education in our kids,” Harper says. “But the public education system and laws are still reticent about us developing programs of instruction for our students.”

A movement to revitalize tribal languages is underway. The success of ‘Aha Pūnana Leo and promise of Mukayuhsak Weekuw are examples of communities taking education into their own hands. When Native American students are taught in their own language and culture, they succeed.

Weston says parents are eager for Mukayuhsak Weekuw to expand into an elementary school, and in fall 2018, the school will include first grade in addition to pre-school and kindergarten. It is a testament to the work and vision of the Wampanoag that just two decades ago, their language was silent, and today, they have a school that expands in size each year. “All of our tribal communities have the capacity to maintain and revitalize our mother tongues,” Weston says—no matter how daunting it may seem.

This article was originally published by Yes! Magazine. It has been re-published at IC under a Creative Commons License.