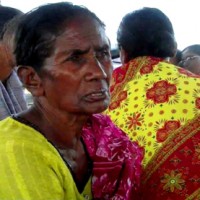 When IndiaUnheard called Ranchi Community Correspondent Priyasheela to speak to her about her video that chronicles the land struggle being waged by the people of Nagri village against the state, she was preparing herself to attend a torch light rally where thousands of protestors would march through the disputed land and hold vigil for justice. Their slogan, says Priyasheela, is one that resonates through Adivasi lands, hearts and minds across Jharkhand, from Netarhat to Nagri: We will give our life but not our land. The protestors were trying to push for a statewide strike in solidarity. More activities and programs are to follow, adds Priyasheela, until the state listens to the people’s demands and the judiciary gives their case a fair hearing.

“The Adivasis have always been expected to move away and make space for the so-called ‘development’ of the state,” says Priyasheela. “When the state of Jharkhand was formed in the year 2000 after a sustained agitation by the tribals, we thought that we would finally get our rights. We have been disappointed by our representatives in the government. So, the struggle for our rights continues.”

On 23rd November, 2011 the Jharkhand government attempted to grab 227.71 acres of fertile agricultural land from the villagers of Nagri village. The draconian Land Acquisition Act of 1984 was invoked and the land was ‘acquired’ for ‘public purpose’ and given to illustrious institutions like the IIM, IIIT and the Law University. The state tried to suppress a public outcry by using the force of the police and military. When the people refused to give up their land, the armed forces of state moved in and began to destroy fields which were ripening into harvest season. Villagers who dared to oppose were incarcerated. The High Court and Supreme Court iteratively dismissed the case filed by the people.

Finally, angered and discontent at the machinery of the state, the people rose in protest. On 4th July, 2012 they demolished the boundary wall constructed for the IIM. The protesters were lathi charged. A few were arrested. The government’s knee-jerk response only added fuel to the people’s emotions. Thousands of people joined in protest, as individuals and as organizations. An indefinite road block was organized along the highway. The issue began to be talked about. It became the focus of much dialogue and debate within the state. Soon enough, the opposition party in the state parliament joined in claiming support to the protests. The farmers declared that come what may, the monsoons were due to arrive and they would plough their fields.

IndiaUnheard asked Priyasheela if she thought that the opposition’s stance had helped the struggle.

Priyasheela sounds unconvinced. “Whatever they may say, all politicians are still joined at the hip. I don’t think I should entertain your question,” she says. “It’s a people movement, guided by the people’s sentiment, written in the voice of the people. Every adivasi child knows that the fight is for their lands and their life.”

She adds, “We are not against the IIMs and other institutions. We would be proud if Jharkhand had its own IIM. But do they have build it over over fertile agricultural land that gives us our livelihoods and feeds our families?”

She says that she is awaiting this year’s harvest. She is expecting a bumper crop. One whose grains, she claims, will have the taste of the good earth that belongs to them.

This report was originally published at India Unheard. FOr more information, please see Gladson Dungdung’s article, Is The Judiciary Biased Against Adivasis?