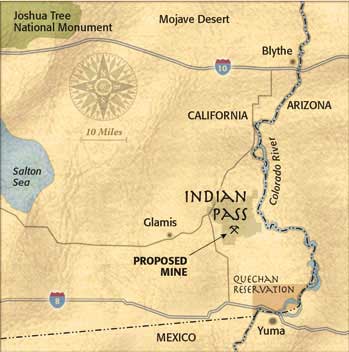 NAFTA. It’s known as a “death sentence” to the Zapatista and to millions of farmers in Mexico who find themselves in a desperate state as their livelihoods are taken from right out under them and they are left with nothing.

It’s something that most us can agree on. NAFTA, the North American Free Trade Agreement, is a vulgar economic scheme that must be renegotiated in the very least. Otherwise things are only going to get worse for the people of Mexico, as ten thousand farmer suicides in the heart of India reminds us.

An important ruling from the NAFTA Tribunal this week suggests some hope that maybe that renegotiation really can happen.

The Tribunal sided the with Quechan People and the United States Government who previously blocked Glamis Gold (now known as GoldCorp) from going ahead with a mining project on Quechan Lands.

In 2003 GoldCorp filed a Notice of Arbitration under NAFTA, where it demanded more than $50 million in compensation for not being able to go ahead with the mine.

In siding the with Quechan People, the Tribunal defends their sacred site known as “Indian Pass” and formally rejects Goldcorp’s claims.

Fort Yuma, CALIFORNIA/ARIZONA — Today, the NAFTA Tribunal in the Glamis Gold dispute against the United States released its long-awaited decision.

The Tribunal found that the State of California’s and the United States’ actions in regulating hard rock mining on public lands did NOT violate provisions of NAFTA.

“We were the first tribe to have our briefs accepted in a NAFTA claim dispute” stated Mike Jackson, Sr., President, Quechan Nation. “The award shows that the Tribunal understood that the Indian Pass area is a sacred area to the Quechan people, worthy of protection from hard rock mining. After battling the mining company for nearly fifteen years, it is good to have this decided. We encourage Glamis (now GoldCorp) to take immediate steps to put the matter behind all of us.”

Such steps could include GoldCorp not appealing the decision and abandoning or otherwise relinquishing its mining claims so that the existing withdrawal of the area from new mining claims would absorb the area proposed for the mine. Glamis must also pay two-thirds of all proceeding costs.

“We are very pleased to see that an international tribunal recognized the obligation of state and local governments to respect indigenous cultural rights. We also note the United States Government worked with the Quechan Tribe in defending its interests, and that the Tribe’s voice was heard at the hearing,” stated Courtney Ann Coyle, Attorney for the Tribe. “We sincerely hope that the Tribe’s actions will pave the way for increased participation by other indigenous peoples in international economic law disputes.”

However, the ruling does not appear to affect GoldCorp’s mining claims in the land. The Tribe has continued its strong opposition to mining – or any development – in this sacred place. The Tribe will be examining its options to further ensure protection of this place in perpetuity.

Preservation would be consistent with the United States’ position in the dispute that, “Glamis’s unpatented mining claims . . . never included the right to mine in any manner which interfered with the state’s ability to accommodate the free exercise of religion, injured Native American sacred sites or endangered the environment or public health and safety.” Thus, use of the land cannot proceed in violation of those tribal rights/interests. The international tribunal found Glamis’s claims wanting, as the Clinton Administration found their claims under domestic land use laws equally flawed.

The Tribe intends to call upon the Obama Administration to confirm the validity of the original Solicitor’s Opinion in this matter, which determined that BLM has the ability and indeed the obligation to deny mines that would impair or degrade native sacred places. A federal court agreed with the original Opinion, application of which would lead to another denial of the mine, should GoldCorp or another company foolishly seek to permit it in spite of the site’s history.

The Quechan Indian Nation is a federally recognized Tribe. About 3,000 Tribal members live on the reservation. The Quechan is the third largest California land-based tribe, with about 45,000 acres in reservation status.

Their aboriginal lands include the area protected in the Clinton-era decision originally denying the Glamis Gold mine, a denial that was later rescinded by the Bush Administration, and lands which became the poster child for successful hard rock mining reform in California. The Tribe has utilized the Indian Pass area since time immemorial for religious, ceremonial and educational purposes. The Indian Pass area was also designated as one of the 11 Most Endangered Historic Places in 2002 by the National Trust for Historic Preservation.

The Tribe offers its deep appreciation to all of its supporters who helped protect this sacred area.