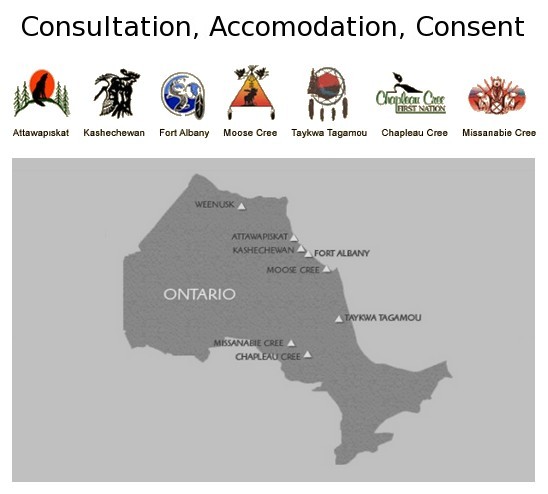 Initially signed on November 14, the resolution declares that “[we] will accept no new mining activity on [our] homelands, including staking exploration, advanced exploration or new mine development until there is:

The resolution further states that existing mining projects may only continue “where there is full consent of the First Nation involved, and where a legitimate impacts and benefits agreement exists.”

“The chiefs have made it clear. They are tired of their homelands being invaded,” said Grand Chief Stan Louttit of Mushkegowuk Council. “The government needs to recognize that First Nations have the legal and constitutional right to be consulted and now we demand that consent be part of the equation.”

“There is a strong, emerging consensus on what’s needed in a new Mining Act for Ontario from both First Nations, environmental groups, legal experts and industry actors”, stated Justin Duncan from Ecojustice, “in order to avoid any future conflicts from mining, we need strong amendments that reflect Mushkegowuk Council’s resolution.”

“The Mushkegowuk Council’s approach will help to resolve the conflicts between the existing, out-dated mining laws and Ontario’s obligations to respect aboriginal rights, and the need to have a more balanced approach to land use planning. We see these as fundamental elements for reforming how mining occurs across the entire province”, stated Ramsey Hart of MiningWatch Canada.

“This is how land management should occur; as the outcome of land use planning processes,” added Rachel Plotkin, from the David Suzuki Foundation.