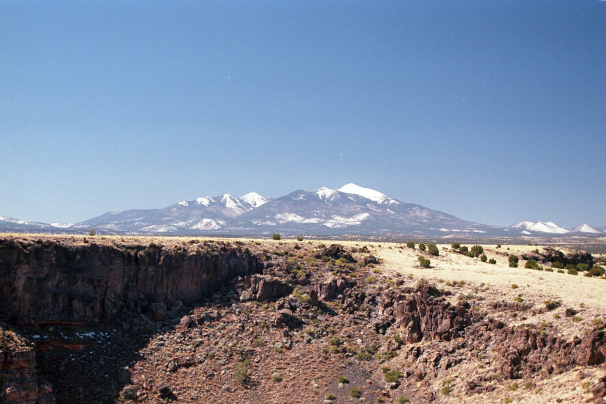 As noted in Las Cruces-Sun, the five Nations immediately came forward and “asked the state to approve the listing… to protect it from an anticipated uranium mining boom, according to the nomination report.”

The listing will last for one year, at which time the committee will decide on whether or not the mountain should be listed permanently as a cultural resource.

But he said those who support the mountain’s listing on the state registry have a lot of work ahead of them. He said the tribes will welcome help from other communities that support the cultural property designation.

“We have to try to mend some fences. There were a lot of misperceptions,” Thompson said. “We need to try and educate people more, if they’re willing to listen and learn and trust.”

The article in Las Cruces goes on to explain that there’s alot of pro-mining opposition to protecting Mount Taylor – known as Tsoodzil (“Turquoise Mountain”) to the Navajo.

“It’s basically stopping and halting the progress of … the uranium industry being able to start and get going again,” comments Ronny Pynes, a local businessman. “It’s a lose-lose situation all around.”

Lose-lose? If we travel back in time for a second, we’ll find that’s just not the case.

According to the Washington post, the last uranium boom at Mount Taylor lasted for about 30 years, up to the 1980s.

[During that time] about 400 million pounds of uranium were extracted from the region. At the end of the boom, around 1984, the price of uranium languished below $10 a pound. Mines shut down, and the United States began importing nearly all of its uranium, with the bulk coming now from Canada, Russia and Australia. But by last summer, the price had rebounded to a record high of $136 a pound.

Though the mines created numerous jobs and substantial royalties for the Navajo and Laguna tribes, the decades of extraction took a heavy toll: lung cancer, kidney disease, birth defects and other ailments at notably high levels among miners and families who lived among piles of uranium tailings — the ground-up waste from milling — and even used the material to build their homes.

In reality then, this is not a lose-lose situation at all. It’s win-lose — and the win on part of the five Indigenous nations far exceeds any losses because those business can just move elsewhere, which they will do no matter what happens at Mount Taylor. But can’t just get rid of a baby born without lungs and arms now can you? And nor can you replace the kidneys, prostates and brains in an entire cancer-plagued population.

In other words, the win means life for the people. And the loss? A minor inconvenience.