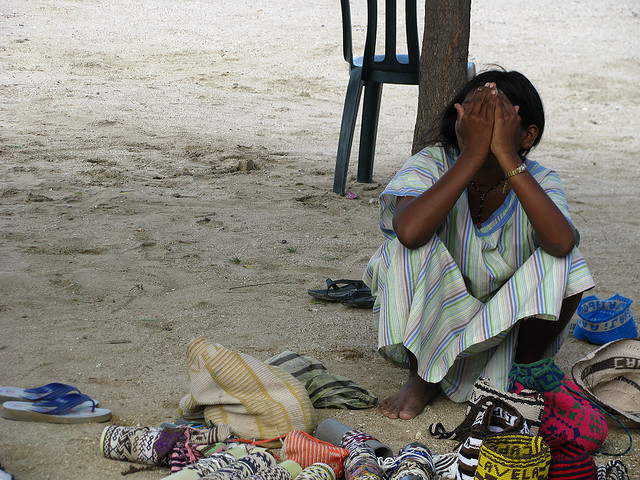 Photo By pattoncito, on flickr. Some Rights Reserved
Support our journalism. Become a Patron!

When Colombia President Juan Manuel Santos was elected in 2010, there was an immediate shift in the country’s policy toward Indigenous Peoples. It was welcomed to say the least. However, despite that shift–and a handful of positive moves that have come forward since–nothing has really changed on the ground, where change is needed most. As Real World Radio observed this week, Indigenous leaders and community members throughout the country are still being murdered and terrorized with impunity.

The Colombian National Indigenous Organization (ONIC) made up by the native peoples of the country is denouncing and rejecting the serious attacks and human rights violations suffered by their communities. Several leaders were murdered these past days, following an end of 2011 and beginning of 2012 with many murders and attacks.

“We reject this act of violence and demand that our rights and integrity as human beings, as communities, as peoples representing different cultures are ensured”, reads a statement by the Indigenous Government Council of ONIC.

The denunciation by indigenous organizations is addressed to different justice and human rights advocacy groups, NGOs, the civil society and international organizations.

According to the statement, the Embera people is one of the most affected by the armed conflict in Colombia. According to authorities of the Indigenous Council Nuestra Señora Candelaria de la Montaña, Herminson and Alexander de Jesus Morales Zamora (29 and 24 years old respectively) disappeared on January 14th. They were members of the Ubarbá and El Rebaño communities. On January 16th, the families of the victims received a note indicating where they were. Their bodies were found n Cerro El Tigre, La Palma community, in a common burial site. They had been shot several times.

A few days before, on January 12th, Jambalo Milciades Trochez Conda was murdered in Cauca department. “It’s not the first time our ancestral territories are attacked by armed groups operating in the region, and it is not the first time we mourn members of our families”, reads the statement.

Milciades was shot to death on his way to his car in Santander de Quilichao, in company of another community member. The 39-year-old indigenous leader lived in Loma Gruesa, Jambalo. He was married and he was the father of seven children. He was also an active member of the Indigenous Watch. According to people who witnessed the attack, the indigenous leader was attacked by people riding two motorbikes in Caloto municipality. He was shot ten times.

The Jambalo Indigenous Council and ACIN wrote that in 2001, Milciades was persecuted by armed groups of the Colombian Revolutionary Armed Forces (FARC). Since then, the leader received death threats by that group.

The Cauca Indigenous Regional Council (CRIC) and ACIN consider that it is extremely serious that the Colombian government hasn’t taken the necessary measures to protect the lives and integrity of the indigenous communities of the North of Cauca. There are precautionary measures in force granted by the Inter-American Commission on Human Rights (IAHRC) due to the continuous threats and harassment suffered by these communities. The CRIC and ACIN demanded “immediate measures to ensure the right to life, the integrity and security of the indigenous community members of Cauca”.

The end of 2011 and the beginning of this year was as violent in the South of the country, according to information provided by the Indigenous Government Council of ONIC. On December 31st, in Santa Cruz de Guachavez municipality, Nariño, two gunmen murdered Jaime Chazatar, indigenous leader. A few days later, a member of the Awá people was tortured and then murdered, and three women from the same community, among them a 12-year-old, were raped. Other two leaders, Abran Mitis, from De los pastos town, and Hernando Chindoy, from Inga de Aponte, were attacked and “miraculously saved their lives”.