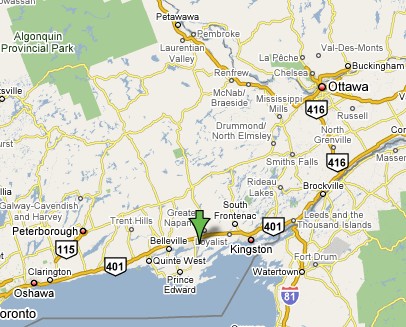 On Tuesday morning, nearly 1000 troops swarmed an encampment set up by the Mohawks to resist an illegal housing development project on Mohawk land. Fortunately, by the time the troops arrived, there were no Mohawks to be found.

The OPP are now looking for people to charge and fine like they did with Shawn Brant, treating him as if he was some sort of ring leader. And the media, of course, is busy making everyone look like, well, a “rag-tag group of loosely assembled dissident Mohawks,” according to the Belleville Intelligencer.

Unfortunately, Tyendinaga Mohawk Council Chief R. Donald Maracle seems took a similar position before the OPP invasion, saying the encampment was unsanctioned and that it interferes with ‘his’ negotiations over the Culbertson Tract.

Memory, however, most likely told the Mohawks that if they were to remain inactive, the project would have moved forward until it was finished, and then it would start to make money that the Mohawk People would not benefit from. It may have even gone on to do so for years to come. All the while through, so-called leadership concern themselves with posturing and maintaining good business etiquette over taking action.

This, of course, would happen despite Canada promising to remove illegal trespassers from the tract — which they did after formally acknowledging it as Mohawk land.

The only action Canada’s taken though, is the likes of what happened on Tuesday: against the Mohawks for demanding Canada obey its own word.

How ironic then, that the Mohawk People should succeed where Canada purposely failed. According to recent article by MNN, the real estate agents behind the development project on the tract have since backed away, saying as much in a signed notice.

Now, it’s unfortunate a roadblock was needed, but the Mohawk People know full well that life does not happen in a boardroom. It happens on the land.

That’s where they went… and that’s where they will continue to go, whether or not Canada and the Provinces and the Band Councils (whom I would say are the real minority dissidents) play their games.