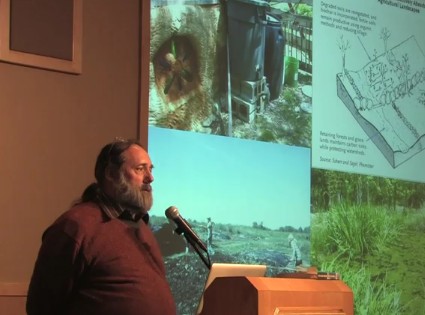 Models of Resilience and Regeneration

An informative and noteworthy introduction to ecovillages in the Copenhagen context by Permaculture Activist, Author and Co-founder of the Global Ecovillage Network, Albert K. Bates. Divide here into three segments, this talk was delivered at the 2009 Conference on Michigan’s Future: Energy, Economy and Environment.

As described by the Global Ecovillage Network (GEN), “Ecovillages are urban or rural communities of people who strive to integrate a supportive social environment with a low-impact way of life. To achieve this, they integrate various aspects of ecological design, permaculture, ecological building, green production, alternative energy, community building practices, and much more.”

In effect, “Ecovillages are living models of sustainability. They represent an effective, accessible way to combat the degradation of our social, ecological, and spiritual environments.”

There are about 420 modern ecovillages around the world today in countries like Palestine, Malaysia, Colombia, Israel, Mexico, Italy, Japan, Iceland and even Canada.

However, there are literally thousands of other ecovillages which have been rationally and methodically developed over thousands of years. Of course, these are traditional indigenous communities; that is, villages and networks of villages that are rooted in concept of Vivir Bien or “Living well” as popularized in the Cochabamba Accord.

In effect, ecovillages are modelled after Indigenous communities because they have stood the test time–certainly more than any of the “failed experiments” we’re just barely coping with today.

And in the Copenhagen context, ecovillages, be they modern or traditional, represent a benchmark of what we should be striving for. As Albert Bates points out in his talk, Models of Resilience and Regeneration, “What I’m talking about is Carbon-negative habitat. And eco-villages as vehicles for experimentation: food, buildings, energy, livelihoods that are branded carbon-negative. Let’s go beyond thinking of reducing 20 per cent this or five per cent that. Let’s think about 110, 120, 180 per cent changes in some of the things we do.”