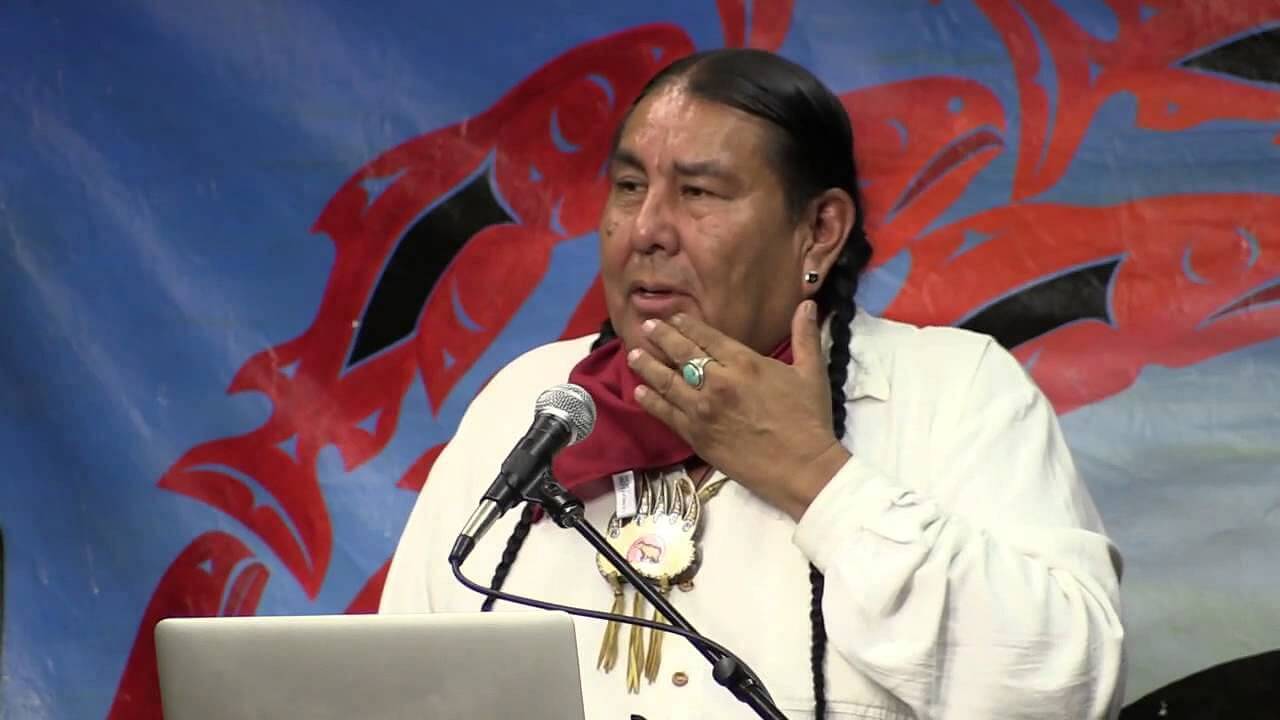 Tom Goldtooth is a Diné and Dakota environmental activist based in Minnesota. He has worked on environmental justice issues with tribal governments since the 1980s, and is widely respected as a grassroots leader throughout North America. In addition to serving as Executive Director of Indigenous Environmental Network (IEN), he is a founder of the Durban Group for Climate Justice, co-founder of Climate Justice NOW!, co-founder of the U.S. based Environmental Justice Climate Change Initiative, and a regular policy advisor to indigenous communities. In 2010, he was honored by the Sierra Club and the National Association for the Advancement of Colored People (NAACP) as a “Green Hero of Color.” Last year, just weeks before COP21, he was awarded the Gandhi Peace Award, bestowed upon leaders who strive for world peace.

In this interview, Mr. Goldtooth takes IC through some of the key challenges that indigenous peoples face in fighting climate change at the international level. As a follow-up to the article, “Why We Need Intersectionality to Understand Climate Change,” Mr. Goldtooth explains how the mechanisms used to control indigenous peoples’ participation don’t merely deny indigenous access to negotiations or the delegates participating in them. Divide and conquer strategies are also used, along with revolving doors between corporate interests and NGOs, and false solutions wrapped in rhetoric that cloud real facts and realities, particularly with regard to human rights. The interview has been split into three segments to provide ample time to reflect. Part One covers IEN’s general strategy at COP21. Part Two examines the divide and conquer effect. Finally, in Part Three, Mr. Goldtooth examines the role of state actors.

Let’s talk about human rights and international climate change policy. How have you made this a part of your approach?

Strengthening the language in the Paris Agreement was a focus of our work on the inside of the COP 21. Last year, those of us in Lima, Peru, at the COP20, observed the governments weakening the human rights language. We had demanded the inclusion of strong language on humans rights and the rights of Indigenous Peoples in the operative text (human rights including migrant rights).

We had demanded the inclusion of indigenous rights, migrant rights, the rights of women in the operative text. This would recognize the rights of the peoples most directly impacted by climate change. Indigenous peoples are very often the front-line communities directly impacted by oil, gas and coal projects. Their right to free, prior and informed consent to stop this devastation is essential. The United Nations has stated that up to one billion people could be displaced through climate change by 2050. And yet, refugees fleeing from environmental disasters do not have the same minimal rights as political refugees fleeing war and persecution. And women often suffer the most from climate change given their responsibility for children, growing food, securing drinking water for their families.

As indigenous peoples within the Indigenous Caucus, UNDRIP, that includes recognition to the standards of right to free, prior and informed consent, or in other words, the right to say NO. 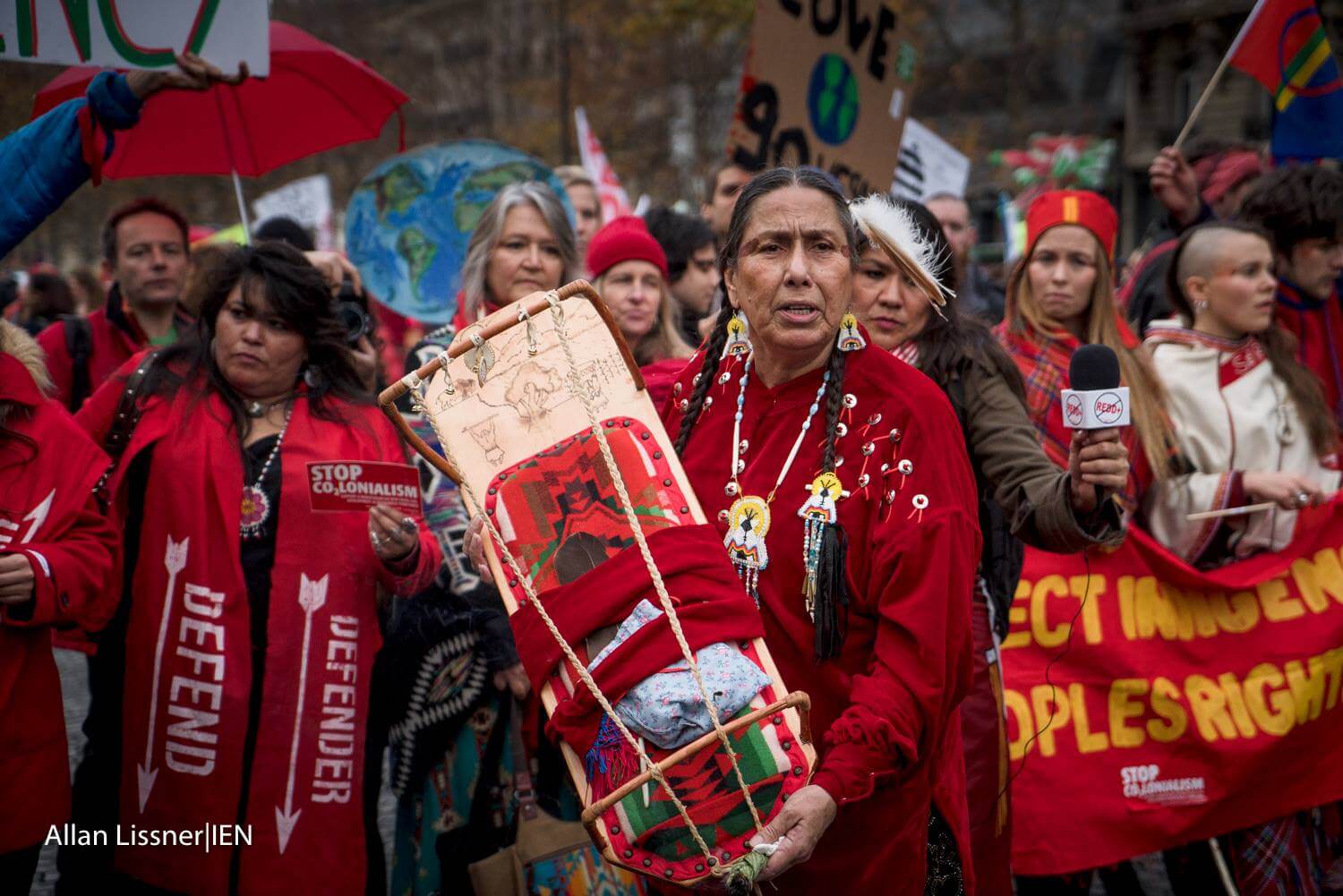 How did IEN organize for COP21 behind the scenes?

IEN brought 51 indigenous peoples to Paris, of which 8 were credentialed (accredited) to go into the United Nations Framework Convention on Climate Change (UNFCCC). IEN is an accredited NGO (we use the name Indigenous Educational Network of Turtle Island for our accreditation – this is our USA incorporated name). Kandi Mossett (IEN’s campaigner on energy, climate and just transition) and our legal counsel Alberto Saldamando have years of experience participating in the UNFCCC. They prepared by staying familiar with the draft Paris agreement. Kandi and Alberto participated in the COP20, in Lima, Peru. It was obvious in Lima of the priority for COP21 to work on strengthening the human rights language in the Paris Agreement (as well as the language specifically on the rights of indigenous peoples).

We are also members of the International Indigenous Peoples Forum on Climate Change (IIPFCC), a loose network of indigenous peoples from throughout the world. The IIPFCC is the official Indigenous Caucus, within the UNFCCC and is called upon by the Chairs of the UNFCCC and its contact groups to submit interventions periodically, based on the agenda, and throughout the two weeks of the UNFCCC COP21. Throughout the year leading to the COP21, we and the IIPFCC inform ourselves about UNFCCC developments through a IIPFCC member-only electronic listserve. Some of the members of the IIPFCC participated in the June 2015 UNFCCC Bonn meeting.

On the outside, the majority of the IEN indigenous peoples’ delegation participated in the Outside Coalition Climate21 space. Months leading up to the COP21, I traveled to Paris for the CC21 preparatory meetings. This is where I met many of the members of the French Coalition and the European NGO groups of the CC21.

What was your experience with these groups?

Part of our strategy was recognition of a growing climate justice movement, and our concern was that the European and the French coalition that formed around preparation for COP21 did not know much about indigenous peoples and our long history of struggle. However, there are some civil society initiatives in France and in Europe, very few though, that have established support groups [for indigenous peoples] throughout the past decades.

Our goal is to create space for the voices of indigenous peoples to be heard. On the inside space, it has a different process. Indigenous peoples have a caucus group, the IIPFCC [discussed above]. I was one of the ones on behalf of IEN, years ago, that helped form that, in the late 1990s. There were only a few of us participating in the UN framework convention on climate change. So it’s grown, and human rights language for the rights of indigenous peoples has been a consistent issue that we’ve addressed for the past decade within the UN framework.

The first World Conference on Indigenous Peoples was held on 22-23 September 2014. The meeting was an opportunity to share perspectives and best practices on the realization of the rights of indigenous peoples, including pursuing the objectives of the United Nations Declaration on the Rights of Indigenous Peoples.

Part Two of this interview with Mr. Goldtooth takes a look at how the legacy of the “divide and conquer” strategy of colonialism is being applied in the modern day climate debate.