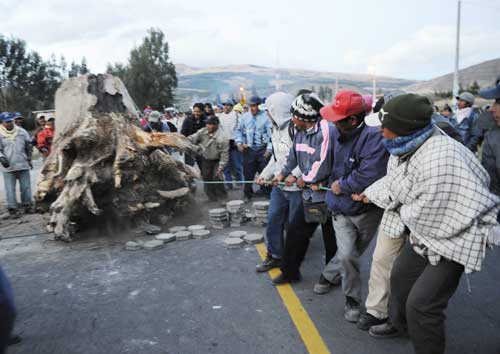 Mobilization in Defense of Water and Life, Day 3

A violent police confrontation has ended with three reported deaths and dozens more injured in the Shuar region of Morona Santiago, Ecuador, on Sept. 30, 2009.

Indigenous communities had gathered in Morona Santiago three days ago, on Sept. 28,
as part of the “Mobilization in Defense of Water and Life,” which was called on by CONAIE president Marlon Santi, two weeks ago, during the National Assembly to defend the Water.

CONAIE temporarily suspended the mobilization one day later, on Sept. 29, following a promise from the Correa government to discuss the proposed water use and management act, a major concern for CONAIE and all of Ecuador’s indigenous People.

A dialogue soon followed between CONAIE and the government , however, several of the blockades and protests that were organized, pressed on, including the Shuar-led blockade in Morona Santiago.

A squad of 500 police officers were reportedly sent in to break up the blockade, which was blocking access routes to several cities. According to CONFENIAE, who issued an open letter denouncing the Correa government, immediately after the confrontation:

“This afternoon at 4:30 PM at the main bridge of the Upano River linking the provinces of Morona Santiago and Pastaza, law enforcement officers backed by a helicopter from the air brutally attacked demonstrators with firearms which resulted in two dead and 9 wounded, members of the Shuar nation.”

The Correa government has refused to acknowledge these two deaths, stating only that “one civilian” is missing and presumed dead, and at least 29 police officers were “injured by buckshot.” Correa himself claimed in a news conference last night that the Shar and other attendants, “tremendously violent groups armed with shotguns and rifles” waited for the police to arrive and then opened fire.

It has not been confirmed whether or not the Shuar were actually carrying weapons, however, several teachers were standing with the Shuar when the police made their move.

CONFENIAE “denounces and holds responsible the government of Rafael Correa” for the government’s “grave violation of fundamental human rights of Indigenous Peoples and nationalities particularly the Shuar Nation.”

They have further declared a “state of emergency”, and urged an immediate UN and OAS-led intervention “to monitor and observe the blatant violation of the Indigenous Peoples’ rights in accordance with all Treaties and conventions signed by our country.” CONFENIAE continues,

“Likewise, we urgently request the establishment of a high level commission of national and international effect, comprising the representatives of governments friendly to America, such as: Bolivia,Venezuela, Guatemala, Nicaragua, and member countries of UNASUR, CAN, International Human Rights organizations, the Coordinator Indigenous Organizations of the Amazon Basin “COICA” in order to search for mediation between the government of Ecuador and the Original Nationalities and Peoples of Ecuador.”

“Finally we call for solidarity from all social sectors in the country, addressing the atrocities that are happening in the Ecuadorian Amazon, violating respect for the true Pluri-nationality of the State. “