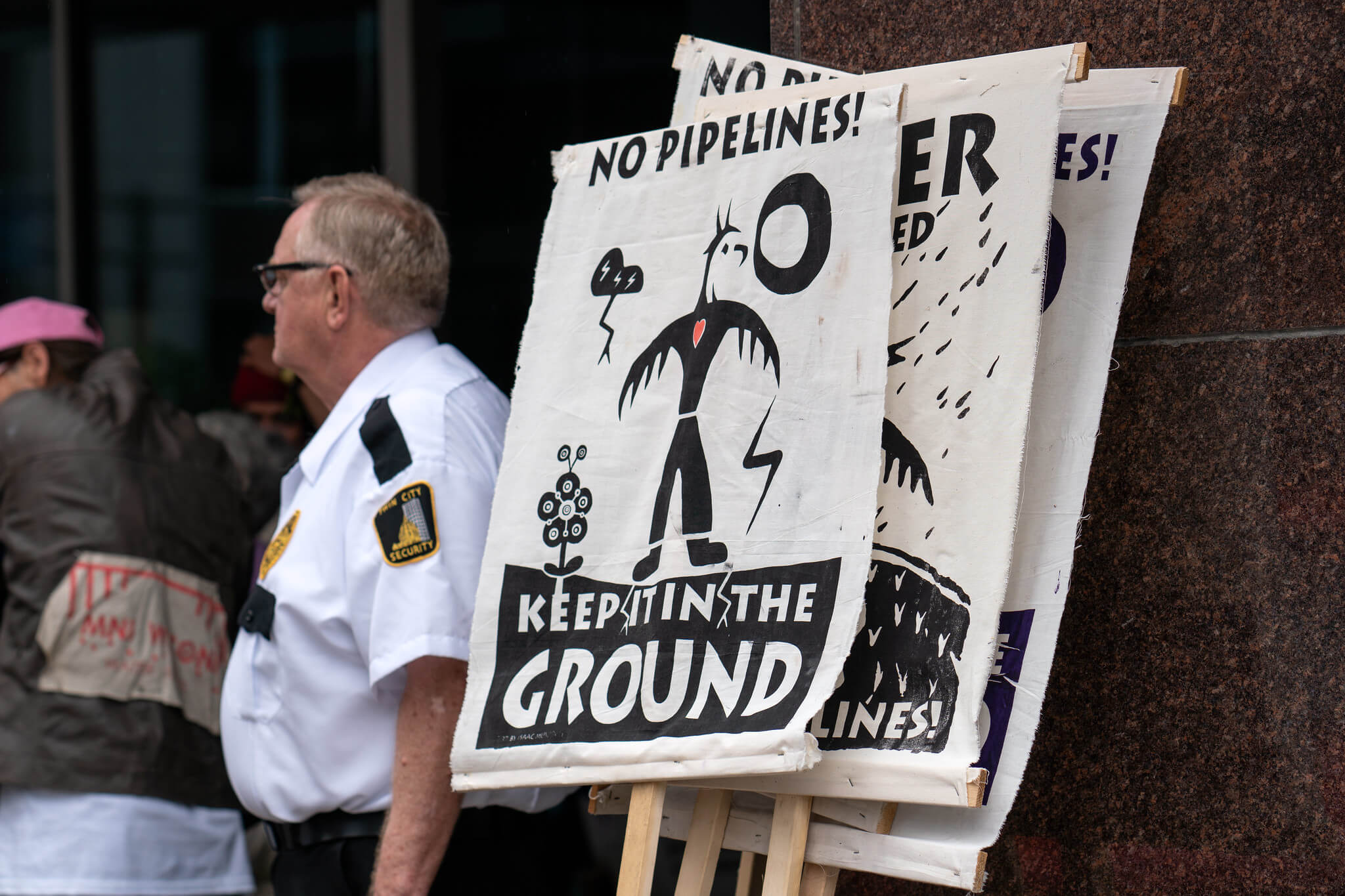 Court declines to review "appalling decision" by Court of Appeals
No Pipelines, Keep It In The Ground signs outside the MN Public Utilities Commission hearing on Enbridge's Line 3 in downtown St Paul, MN. Photo: Lorie Shaull (CC)
Support our journalism. Become a Patron!

Yesterday, the Minnesota Supreme Court denied justice to the Anishinaabe people, declining to review an appalling decision by the Court of Appeals.

On June 3, the Appeals Court decided to require an assessment of the potential of oil spill impacts on Lake Superior, but that there was no need to conduct a tribal cultural impact study on the proposed Enbridge Line 3 in northern Minnesota.

This tar sands pipeline is proposed in a new corridor across 41 wild rice watersheds. This decision allows state agencies to forgo on-the-ground surveys before permitting construction projects that may destroy native cultural properties.

Honor the Earth, the Red Lake, White Earth and Mille Lacs Band of Ojibwe, and the Environmental Law and Policy Center each petitioned the Supreme Court to review the Court of Appeal’s disregard for native rights.

” I’m profoundly saddened that the Court believes that the rights of a Canadian multinational corporation should override the Anishinaabe people and the waters of this land”, Winona LaDuke of Honor the Earth stated. “We will continue to face Enbridge in every legal corner, and watch as divestment from the tarsands continues, and renewable energy serves more Americans and Anishinaabe.”

The Enbridge Line 3 project remains stalled in the Courts, as the Appeals Court did rule on June 3, that the state Environmental Impact Statement had failed to address the potential impact of a spill on Gichi Gummi, Lake Superior.

That plan, including the Coast Guard’s analysis ( that agency is also facing a potential oil spill in the eastern Great Lakes- Mackinac) is a complex process. There are also a number of state permits required.

On August 8, 2018, the Bands filed a Petition for Writ of Certiorari to the Minnesota Court of Appeals. On June 3, 2019, the Court of Appeals issued its opinion finding that the EIS was inadequate on the limited grounds that it did not address the potential impact of an oil spill into the Lake Superior watershed. But it rejected the Band’s argument that the EIS was inadequate because it failed to include a complete analysis of the potential impacts to Traditional Cultural Properties (TCPs) of the Bands. Today’s action by the Supreme Court refused to even hear arguments on this claim.

According to White Earth attorney, Frank Bibeau, and language in the Supreme Court petition, the Bands emphasized that many of these resources are not identifiable through standard written archaeological and historical sources. Instead, they require on-the-ground surveys, because archaeological records are not comprehensive.

In preliminary documents, the PUC committed to identify cultural resources, including archaeological resources, historic resources, and sacred places in the EIS. These should have been evaluated via actual on-the-ground surveys for Enbridge’s preferred route and route alternatives, so that the PUC could chose the route with the least impact on native peoples. Instead, the PUC relied on incomplete paper records before choosing a route and finding a need to build a new pipeline to feed overseas exports. According to federal data, the US now exports 8.7 million barrels of oil every day. This volume amounts to 42 percent of total US domestic consumption and is over three times more oil than are brought into the US by Enbridge from Canada. The PUC found that the State of Minnesota preferred to support additional exports rather than protect Minnesota’s Anishinaabe people from the harm caused by the Line 3.

“We completely disagree with the Supreme Court’s decision, since it opens the door to destruction of native properties and cultural and religious resources,” said Winona LaDuke, Co-founder and Executive Director of Honor the Earth. She added, “This decision has statewide impact because treaty and legally protected native properties are found throughout Minnesota and are likely to be affected by future projects. This harmful decision is just one more in a long series of hostilities to native peoples, founded in Minnesota’s historical attempted genocide. Today’s Supreme Court decision ignores the rights of the Anishinabe to mineral, animal, botanical, air, water, land, timber, soil, quietude, recreational, and historic resources, including the rights of Menomin, which is now legally protected under Tribal law. Ultimately, today’s ruling undermines the Anishinabe way of life in our own Treaty lands.”