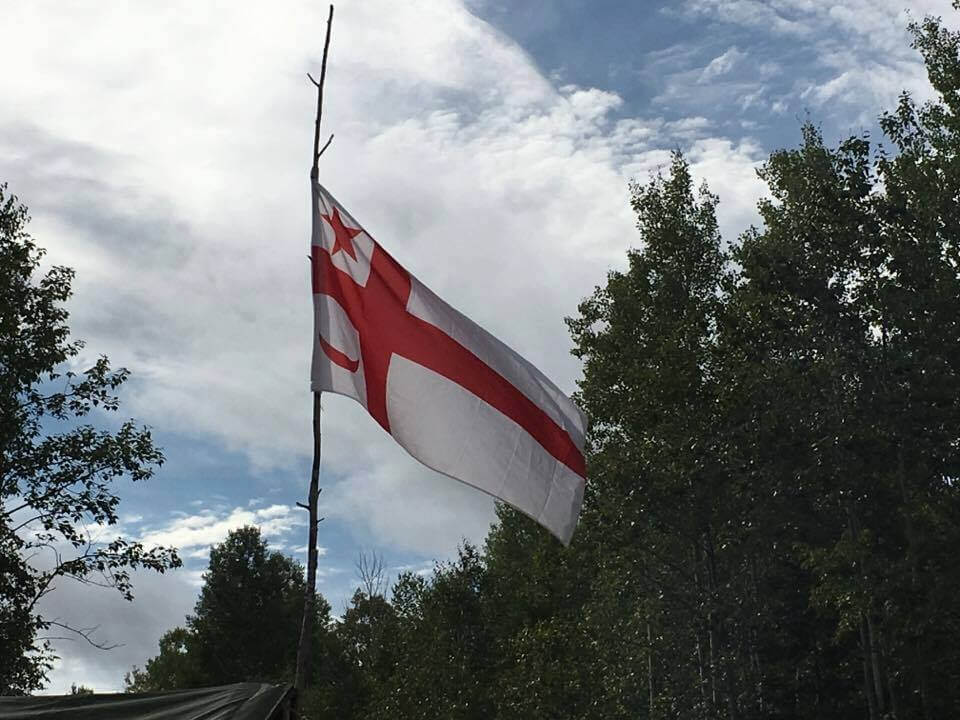 The Mi'kmag flag now floats upon the Camp by the river!
Support our journalism. Become a Patron!

August 22, 2017 – Today, we traditional council chiefs from the 1st and the 7th Districts of Mi’kma’ki have gathered at the Junexit Banquet organized by the Camp by the River. We are here not only to support the occupation that has been set up on August 7th against Junex but also to assert our inherent rights and title over our unceded and unsurrendered territory, as affirmed by the 1763 Royal Proclamation. We assert our presence here to protect our territory under the Protection clauses for unceded lands, as protected by Constitutional Rights, Charter Rights, Human Rights, and International Rights.

The Chief of Mi’kam’ki 1st District, Unamaki, which is currently involved in its own struggle against oil and gas exploration by Alton Gas, as well as the 2011 historic and victorious struggle against fracking in Elsipogtog (6th District), thus adds her support to the 7th District’s current opposition to exploration and extraction on its land by Junex.

After the dismantling of the blockade, the struggle is just beginning, and coalitions are being formed between Mi’kmaq District Chiefs from the northern and southern ends of our Nation, as well as with land and water protectors from other nations.

As Traditional Mik’maq council Chiefs, we affirm our complete and inviolable sovereignty over the land Junex is illegally attempting to destroy. We are not concerned by the Indian Act (INAC) leadership, who’s authority lies exclusively within the border of the Federal Indian Reserves as stated in the Chapter 91.24 of the Constitution of Canada (Indians and land reserved for Indians). INAC describes only boundaries of reservations, and not traditional hunting and fishing territories. Outside of Federal Indian Reserves, the authority and jurisdiction lies with the rights holders, i.e. traditional district chiefs.

We demand an immediate moratorium on all exploration and/or development of oil and/or gas on traditional mik’ma’ki territory, District 7.

As Mi’kmaq peoples, we have a duty and obligation to defend and protect our Ancestral District territory. We cannot remain silent and condone any oil drilling within our territory that will poison our lands, waters, fauna and wildlife. We call all groups and individuals concerned by the protection of water and land on Gespegawagi territory to voice their support, take action, and join the struggle on site.