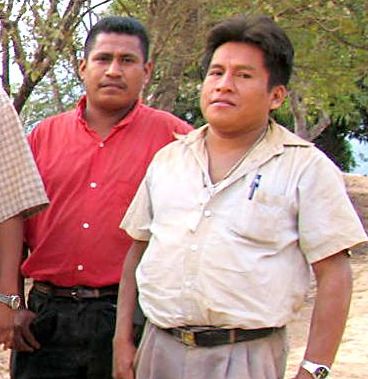 The bodies of Manuel Ponce Rosas and Raúl Lucas Lucía, two indigenous human rights defenders and leaders of the Organization for the Future of Mixteco People (OFPM), were discovered on Sunday, in shallow graves near the township of Tecoanapa in Costa Chica, Guerrero.

The two men, aged 32 and 39 respectively, were abducted on February 13 by three armed men claiming to be agents of the Ministerial Investigative Police (PIM).

“At the time of their abduction, [Manuel and Raúl] were attending an event marking the beginning of the building of a local secondary school in the town of Ayutla de los Libres,” reports Amnesty International. “The event was attended by several municipal authorities. According to Raúl Lucas’ wife, who was also present, an armed man arrived at the school at 1.15pm and threatened Manuel Ponce with a gun. Raúl Lucas intervened to try to help him and was subsequently hit by the armed man.”

“A second man with a gun then arrived on the scene and both men forced Raúl Lucas and Manuel Ponce into a vehicle with tinted windows and no number plates which then driven away.”

“No attempt was made to stop the abduction and… when relatives tried to report the abduction to the police and prosecutor’s office, the authorities refused to open a criminal investigation.”

The Human Rights Centre of Montaña reports that, “at the same event was participating the director of Public Safety of Ayutla – and ex-military personnel, Luis Jose Sanchez Hernandez who together with the police officers who were with him, left the event exactly minutes before Raul Lucas and Manuel Ponce were forced into the vehicle.”

“During the identification of the bodies, which were found in plastic
bags and buried about 80 centimeters below ground level, the family
members noted that the bodies had visible marks of torture and in
particular, Raul Lucas had a bullet hole in the head, while the death
of Manuel Ponce seemed to have been caused by cerebral trauma.”

The Human Rights Centre, along with the widows, relatives, and family of Raul Lucas and Manuel Ponce are demanding a full investigation into the deaths of the two slain leaders.