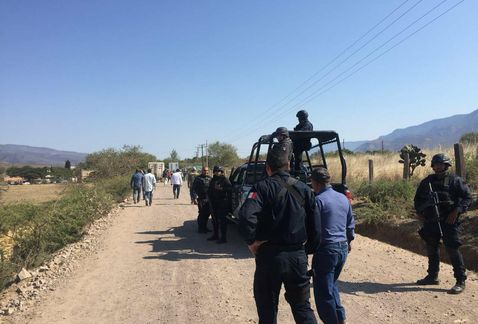 Judgments favoring the Huichols blocked again, this time with violence and intimidation.
Nayarit State Police who were sent to accompany court officials said it was impossible to enforce the law. (Agustin del Castillo)
Support our journalism. Become a Patron!

Nayarit State Police who were sent to accompany court officials said it was impossible to enforce the law. (Agustin del Castillo)

Carlos González García arrived yesterday morning after a long drive on the gravel road that rises from the El Cajón dam to the entrance of the town of Huajimic. Two hundred furious ranchers were waiting for him and the members of his caravan.

“With their knives they ripped the tires of the truck owned by Benjamín Sandoval, a lawyer from Tepic who is supporting us; Cristian Chavez, our geographer, arrived, and they slashed two of his tires with knives, broke off a mirror, and tried to threaten him. They brought a rope with a noose and they put it through the window, so that I could put my head in (suggesting that I should be hanged). Cristian was told that they were going to cut off his head, then they started to push the truck to try to move it to the side of the road, to push it off into a ravine (…) they held us for almost two hours. Some of these civilians were armed and others were hooded and carrying radios. When we were finally able to leave, they told us that if we came back they would kill us … “, the lawyer told MILENIO JALISCO.

That is the best summary of the third execution of judicial sentences, in which the staff of Agrarian Tribunal 56 of Tepic failed in its responsibility to put into the hands of the indigenous members of the Huichol community of San Sebastián Teponahuaxtlán (Wuaut + a), lands that the Huajimic cattle ranchers have held, in some cases, for up to five generations, but over which the Huichols defended by González García have immemorial and historical rights.

The natives of Mexico’s Western Sierra Madre have demonstrated to the agrarian magistrates that they are lands that the Spanish crown recognized as belonging to them from the beginning of the 18th century, and therefore, their right is prior to that of their neighbors, whose permanence in the area has been supported by the government State of Nayarit, which the Huichols see as the main obstacle to the application of the law in the area.

The delegation, including the actuary and the topographer of Agrarian Tribunal 56 of Tepic; a visitor from the National Human Rights Commission and an observer from the Jalisco State Human Rights Commission; and the three members of the Wixaritari (Huichol) defense team, was allegedly supported by four trucks with 21 state police from Nayarit, but, according to the testimony of the litigant, “they could do little”. After being informed of the facts, the magistrate of the agrarian tribunal, Aldo Saúl Muñoz López, who did not travel on this occasion to the mountain community, described the police presence as lukewarm because they did not contain the aggressions. 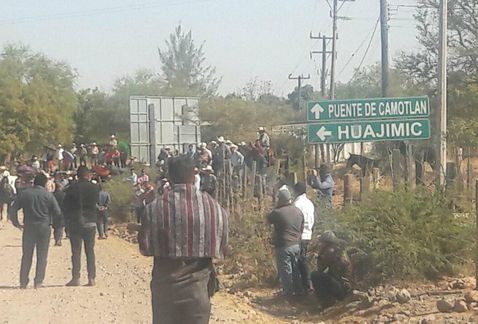 Thursday’s demonstration was marked by aggression and threats of violence by non-indigenous landholders whom the courts are requiring to return their land to the Huicholes after a five-generation dispute. (Agustin Del Castillo)

The demonstrators, headed by Ignacio Quintanilla, Otoniel Sandoval, Rafael Sandoval, Fortino Montoya, Audelina Villagrana, Magdalena Mira, Reveriano Montoya and Ciro Quintanilla, according to the information provided by the court staff and by a defender of the Wixaritari, carried out during about two hours a systematic harassment of the members of the caravan.

“That is to say, the police commander approaches them, they tell him they will not let them pass, that they will not deliver the lands without compensation, that they cannot be executed. The policeman says: ‘We can’t do it, we’re going back, and no … they blocked our passage.’”

The demonstrators forced the filing of a record in which the facts were recorded, and it was confirmed that the Huajimic residents were not going to allow more sentencing executions. They forced the representatives to sign it.

“It says only what happened; it says that the actuary came to execute, that they were opposed, and that they be compensated for the real value of the premises …”.

The rest of the day of intimidation passed with enraged speeches from the leaders of the protest, who pointed out that the lands belong to them because it was not the Huichols who made them flourish; and that the aboriginal people are “a bunch of lazy people” who “have children so that the government gives them money”.

There were two groups of guests who did not arrive: hundreds of wixaritaris had begun their descent, once again making the long trek from their villages in the highlands of Jalisco for the formal takeover of the two properties, one of 15 hectares and another, just over half a hectare. There was also talk of alleged support by the police of the neighboring Jalisco state, but it was declined: the conflict would have become more difficult, because some leaders see the indigenous people as representatives of an alleged desire for territorial expansion of the larger neighboring state.

On April 25, a new delivery of properties is scheduled. The forecast is not optimistic.

This article was republished with permission from Milenio Jalisco.