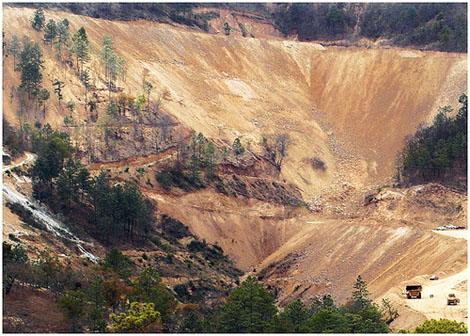 Acting on behalf of the Canadian-mining company Montana Exploradora de Guatemala (Goldcorp), on June 13th the police shot tear gas at local children and used force against women peacefully demonstrating their opposition to Goldcorp’s Marlin mine. Please see the full statement below for more information.

As an aside, Dawn Paley over at the Dominion reports some additional news. Guatemala’s Constitutional Court recently found 8 sections of the federal mining law to be unconstitutional. While this won’t bring an end to the mine, it should help mitigate the damage it will cause to the environment.

The company Montana Exploradora de Guatemala (subsidiary of Goldcorp Inc.), through its Marlin mine, has caused great damage to our lives and livelihoods, and continues to commit atrocities that violate fundamental human rights, particularly of the Mayan Mam peoples in the municipality of San Miguel Ixtahuacán – peoples who are the original inhabitants of the lands which have been concessioned in the interest of transnational corporations by the Guatemalan state.

On the 13th of June, Montana Exploradora de Guatemala (Goldcorp) acted via the National Civil Police (PNC) to repress women, children and men who are reclaiming guarantees of their lives and livelihoods, threatened by the actions of the company. These actions by the police are the response to the permanent resistance of an organization of families who do not want the mining company, or the presence of electrical wires and transformers, to service the mine in their territories.

For these reasons, we publicly denounce the actions of the National Civil Police in favour of the mining company, acts which include threatening dozens of local children with tear gas, as well as the use of force against women who took peaceful action to demonstrate that they do not want the mining company in their community and territory.

1. THE THREAT OF ELECTRICAL TOWERS

The posts that support the high voltage cables are about to rise over homes that are located near the posts; in addition, the high voltage tower provokes illnesses because of radiation, which is cause for worry for families that live in the area.

2. TRICKERY AND LIES IN THE PURCHASE OF COMMUNAL LANDS

3. WORSENING OF DAMAGE TO PEOPLES’ HOMES

From 2006, when the explosions to break up the rock and extract GOLD and SILVER from our lands began, until now, there are more than 100 homes that have been damaged and cracked as a result.

BECAUSE OF THIS, WE DEMAND THAT:

2. Human rights organizations make use of the studies presented to them in order to clarify the actions committed by the police and company security guards.

3. The Attorney General’s office fulfils its duty and initiaties an investigation into the actions committed by public forces.

4. The international community observes and acts in solidarity with our dignified struggles in defense of our legitimate rights, so that these acts do not remain in impunity.