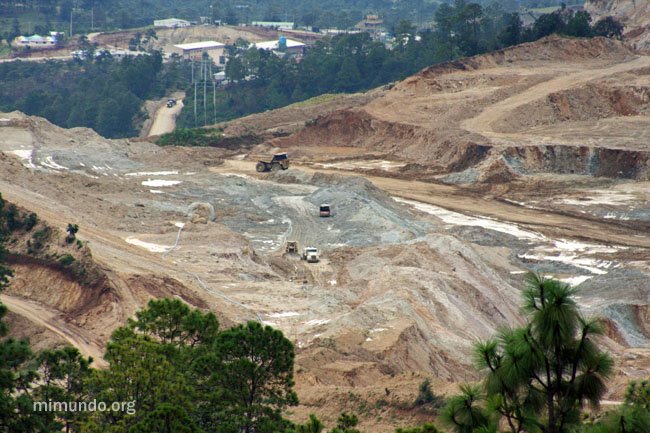 A group of Mayan Mam villagers set fire to a pickup truck and an exploration drill rig earlier this month at the Marlin gold mine in San Miguel Ixtahuacan municipality, San Marcos, Guatemala. The mine is operated by Montana Exploradora de Guatemala, a subsidiary of Canada’s Goldcorp Inc.

According to Rights Action, Goldcorp had been pressuring about 20 Maya families from the Sacmuj villages to sell their land. The families consistently said no to the company.

Goldcorp, as predictable as ever, apparently decided to just ignore the villagers and bring their equipment onto their land without the villager’s consent.

This was a major concern to the village. Not only was it blatant trespassing, but the villagers feared that the company’s presence would endanger their primary water supply, if not from contaminants than from the company using up all the water for their operation.

The villages began asking Goldcorp to remove the vehicles and equipment. They also presented the Human Rights Ombudsman of Guatemala with a formal complaint.

Then, on Wednesday, June 10, Goldcorp employees conceded–telling the villagers that they would everything the very next day. But the day came and went, and the equipment remained. Instead of removing it, the company signed an agreement to take the equipment the next day after that, June 12.

Then, as June 12 rolled on it became clear that once again the company was not going to comply— leading a group of villagers to respond, by burning the equipment.

Incidentally, on June 10 Goldcorp requested a police and army presence. The government immediately sent in 2 units from the national police and 4 vehicles full of soldiers. The next day, June 11, another 6 police units rolled in, along with two units from the anti-riot squad.

Fortunately, the officers did not intervene when the villagers took action on June 12.

However, one week ago, on June 19, Goldcorp successfully convinced the Guatemalan government to bring charges against seven Maya villagers in relation to the incident.

For the Glory of Goldcorp

That same day, January 22, Goldcorp promised to establish a dialogue with the community, who had set up a blockade 10 days prior to protest a range of concerns about the mine, which included the “destruction of dozens of homes due to the use of explosives; water contamination resulting in health problems of people and livestock; an apparent lowering of the regional water table resulting in the drying out of wells and natural springs, and some crop failure (ex: fruit trees).”

Eventually, almost almost all of the charges were dropped by the courts.

It was a refreshing change, to say the least. But one that didn’t phase Goldcorp the slightest. In 2008 they tried to run the same gimmick again– this time charging Eight Mayan Women. This situaiton is still ongoing.

Standing alongside this betrayal and the company’s repeated pursuit of frivolous lawsuits that tie up the Guatemalan courts, is a study conducted earlier this year by the Pastoral Commission for Peace and Ecology (COPAE) which has yet to receive any media attention. The study confirms beyond all measure of doubt that the Marlin mine is poisoning local water supplies.

Goldcorp firmly denies the report, stating endlessly that the lesions and rashes covering the bodies of Maya Men, Women and Children, is not because of poisonous substances like arsenic, extremely high concentrations of which were found in a river downstream from the mine. Instead, Goldcorp says, it’s because the Mayas don’t know how to clean themselves.

All of this together and picture should emerge in your mind of a company that couldn’t care less about indigenous people. A company who’s word is worth less than a scratch of ink on paper, and who’s all-too-Canadian view of the world demands they have access to the same rights and freedoms that they deny the Mayan People from exercising.

The company won’t even halt their mining operation for a few weeks to investigate the COPAE report. Even if Goldcorp is right (as repulsive as that thought is) why take that chance?

Why? Because it’s Goldcorp. And because impunity so often reigns for those who think wealth is more important than basic human rights.