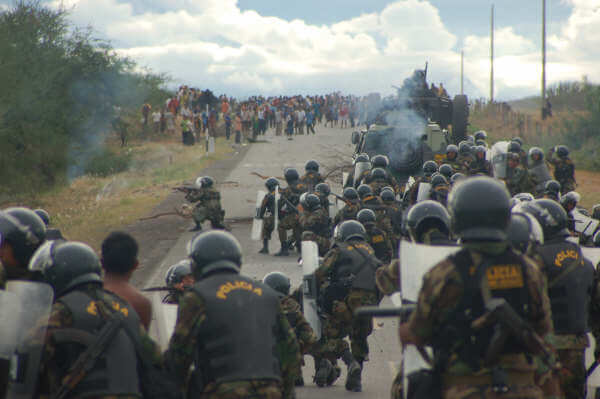 Mass Trial of Indigenous leaders set to begin in Peru

"Photos from Bagua" by Ben Powless
Support our journalism. Become a Patron!

A massive trial involving 52 Indigenous leaders and activists is set to begin this week, reviving the tragic events that took place four years ago in the Amazonas Region of Peru.

In April 2009, a national indigenous mobilization was organized to stop a plan by the Peruvian government to roll-back indigenous land rights and make it easier for industry to exploit the Amazon rainforest.

The first month of the mobilization, led by more than 1200 communities, was largely peaceful. However, that began to change on May 9, 2009, when the Peruvian government declared a state of emergency in the regions of Loreto, Amazonas, Cusco, and Ucayali–where thousands of Indigenous Peoples were concentrating their efforts.

Once the state of emergency was declared, the number of confrontations with police and military began to climb. Nevertheless, the mobilization pressed on, with Indigenous Peoples carrying out daily protest actions across the country.

With the Indigenous Peoples showing no signs of backing down, on May 20, Peru’s Congress took a positive step forward by repealing one of four laws that sparked the mobilization: Legislative Decree 1090, a new forestry law that removed the protected status of some 45 million hectares of rainforest. Six days later, a second legislative decree, aimed at promoting private investment in irrigation projects, was declared unconstitutional.

While there was enormous relief over the removal of the two decrees, two others remained:

With both decrees posing a significant threat to the security of Indigenous land rights, in addition to the fact that the government failed to carry out a process of consulting or seeking the consent of effected Indigenous Peoples–in violation of ILO Convention 169 and the United Nations Declaration on the Rights of Indigenous Peoples–the mobilization pressed on.

After a few more weeks of protest, it looked as if a resolution was at hand. Several thousand Awajun and Wampis Peoples had set up a series of strategic blockades on Fernando Belaúnde Terry road in Bagua, Amazonas Region. Having so effectively seized the important road, the government sought to strike a deal with the Awajun and Wampis, ultimately convincing the Indigenous Peoples to begin taking down their blockades. Many of the Awajun and Wampis were long gone by the time June 5 rolled around.

In the early morning hours of June 5, the Peruvian military police made their move.

When the dust finally settled, 38 people were dead and more than 200 were injured.

Two weeks after the brutal confrontation, Peru’s Congress overwhelmingly voted to strike down both Legislative Decree 1064 and 1089.

Following Congress’ vote, Daysi Zapata, vice president of the Interethnic Association for Development of the Peruvian Jungle (AIDESEP), the organization that started the mobilization, officially called for an end to all protests, stating, “Today is an historic day, we are grateful that the will of indigenous peoples has been heard, and only hope that in future, governments meet and listen to the people, and not legislate the laws back in.”

Four years later, the decrees have remained off the books; the government taking judicial aim at many of the Indigenous Peoples who took part (or allegedly took part) in the mobilization. Since 2009, more 100 separate lawsuits have been filed involving at least 350 Indigenous men and women.

The upcoming lawsuit, known as the “Curva del Diablo”, will be the largest of them all. In fact, with 52 indigenous leaders facing anywhere between 35 years to life in prison, it is going to be the largest trial in Peru’s history.

AIDESEP President Alberto Pizango, who is among the 53 named defendants, recently commented in an internal AIDESEP interview:

There’s a “Before Bagua” and an “After Bagua”. A before in which the Peruvian State didn’t want to and didn’t know how to listen to the proposals of indigenous peoples. This exacerbated the situation until things came to what happened, which unfortunately took so many lives unnecessarily. I’d say an “After Bagua” because thanks to the Amazonian mobilizations I can say that today the indigenous agenda is not only inserted in the national level and within the State, but on the international level.

I’d just say to the indigenous peoples and my indigenous brothers who are being tried for these regrettable events that they should stay firm in continuing to lift up the voice of indigenous peoples. All we have done is comply with our role as being the official spokespeople and work to insert in the national public agenda the different claims as mandated to us by our peoples. I’d reiterate to my brothers that they should stay firm in the significance of indigenous peoples rights. We’re going to overcome these accusations, we should be conscious of the fact that we haven’t committed any crimes. Perhaps our only crime was to carry the voice of the people, which is what we’ll be judged for starting May 14th….