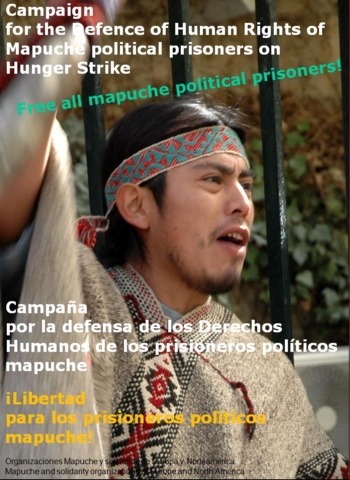 The hunger strike began on July 12th, 2010, with five Mapuche at El Manzano Prison in the city of Concepcion and another 13 at the Penitentiary Centre (CCP) in Temuco. By the end of July, an additional 13 Mapuche in three other prisons had also begun the hunger strike.

As reported by Global Voices Online, the group represents about a third of the total number of Mapuche who are currently on trial under the country’s infamous Anti-terrorist Law.

According to the Toronto-based support group, the Women’s Coordinating Committee Chile-Canada (WCCC), several Mapuche communities have also announced their support for the hunger strike, “including the Communities of Rankilko, Newen Mapu, and Juana Millahual to name a few, ” notes the WCCC,

They go on to point out that “The murderous legacy of the Lagos and Bachelet Chilean governments has kept the Criminalization of the Mapuche struggle for autonomy, the implementation of the Antiterrorist Law, the double-jeopardy of Military courts and the use of police set-ups into the current Piñera administration, which further seeks to plunder and repression of our people. All of this during the year of Chile’s 200th Year of Independence, taking place on September 18th, 2010, which has represented the ongoing genocide of our people.”

“The situation is URGENT as the health of our Mapuche Brothers is rapidly deteriorating.”

In light of this, the WCC has organized a solidarity protest in Toronto for August 12, 2010. They are urging all”Indigenous and anti-colonial Activists/Supporters to show their solidarity to the cause of indigenous solidarity and join us in Protest.” Details of the protest can be found on Facebook.com

If you’re not in Toronto but still want to show your support for the Mapuche, a petition has been set up by a coalition of Mapuche and solidarity organizations in Europe and North America.

You can find the petition at http://mapuche.info/?lp_1=2

The Mapuche political prisoners, currently being held in the “El Manzano” detention centre in Concepcion, inform the Mapuche Nation and public international and national opinion the following:

In summary, we denounce that we have been part of Media Setups carried out by the Public Ministry through Anti Mapuche prosecutors and corrupt police forces. It is in this way that the Chilean State, in defense of the corporate interests in the conflict with our People and in their urge to persecute and annihilate the Mapuche Movement, has criminalized the just cause of the communities, imprisoning and launching themselves against our people; imposing several dictatorial and fascist laws on honest social activists.

At the same time, we also denounce the existence of a strong and grotesque Anti-Mapuche campaign orchestrated by the economic and political Right of this country, who use their means of communication, their prosecutors and politicians with the objective of convincing public opinion.

Due to all of the above, we declare that we will continue our hunger strike unless these just demands are met:

3. Freedom for ALL the Mapuche Political Prisoners imprisoned in different jails throughout the Chilean State. This is expressed by:

Lastly, we call out on Our People to Mobilize, to protest and struggle for what we think is a just cause; including social and political organizations to remain alert of the situation.