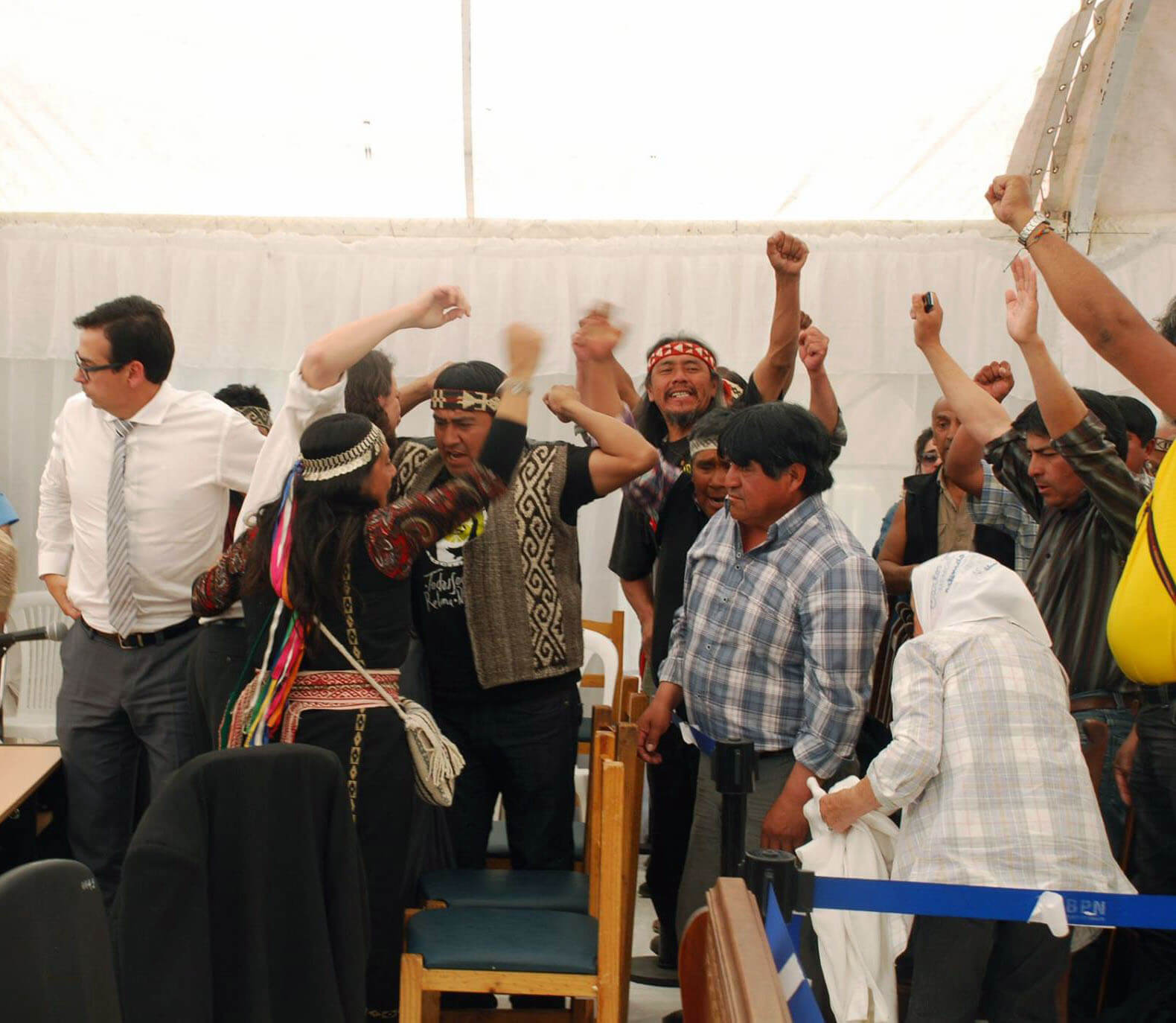 Mapuche leader found “not guilty” in unprecedented trial in Argentina

The celebratory cries of “Marici weu” “Marici weu[1]” could be heard echoing throughout the streets of the sleepy mining town of Zapala in southwest Argentina. After eight days of intense deliberations in court and more than three years of preparation, Relmu Ñamku and two other Mapuches, Mauricio Rain and Martin Velasquez Maliqueo, were free.

“Today justice has been done,” said a tearful Ñamku in court on Wednesday, November 4. “From the onset, we said that this was an unjust trial and denounced the collusion between the Judiciary and the oil companies. Today, the Indigenous People have triumphed, as Mapuches we are stronger and will continue more than ever to defend every single metre of our territory.”

The case began in the community of Winkel Newen on December 28, 2012, when Officer of the Court Veronia Pelayes, representatives of the Apache Oil Company and a contingent of police arrived with an eviction notification. Apache had tried numerous times to enter Mapuche territory to reactivate an oil deposit but had failed due to the community’s insistence on legal irregularities, including lack of prior consultation.

The presence of the officer of the court with police and a backhoe driven by members of the oil company indicated that their intention was to carry out an eviction that very day. The community defended itself by throwing stones, one of which hit and injured Pelayes and damaged a vehicle. It was this incident that lead to an accusation of “attempted homicide” against Ñamku and charges of “serious damages” for Velasquez Malique and Rain. 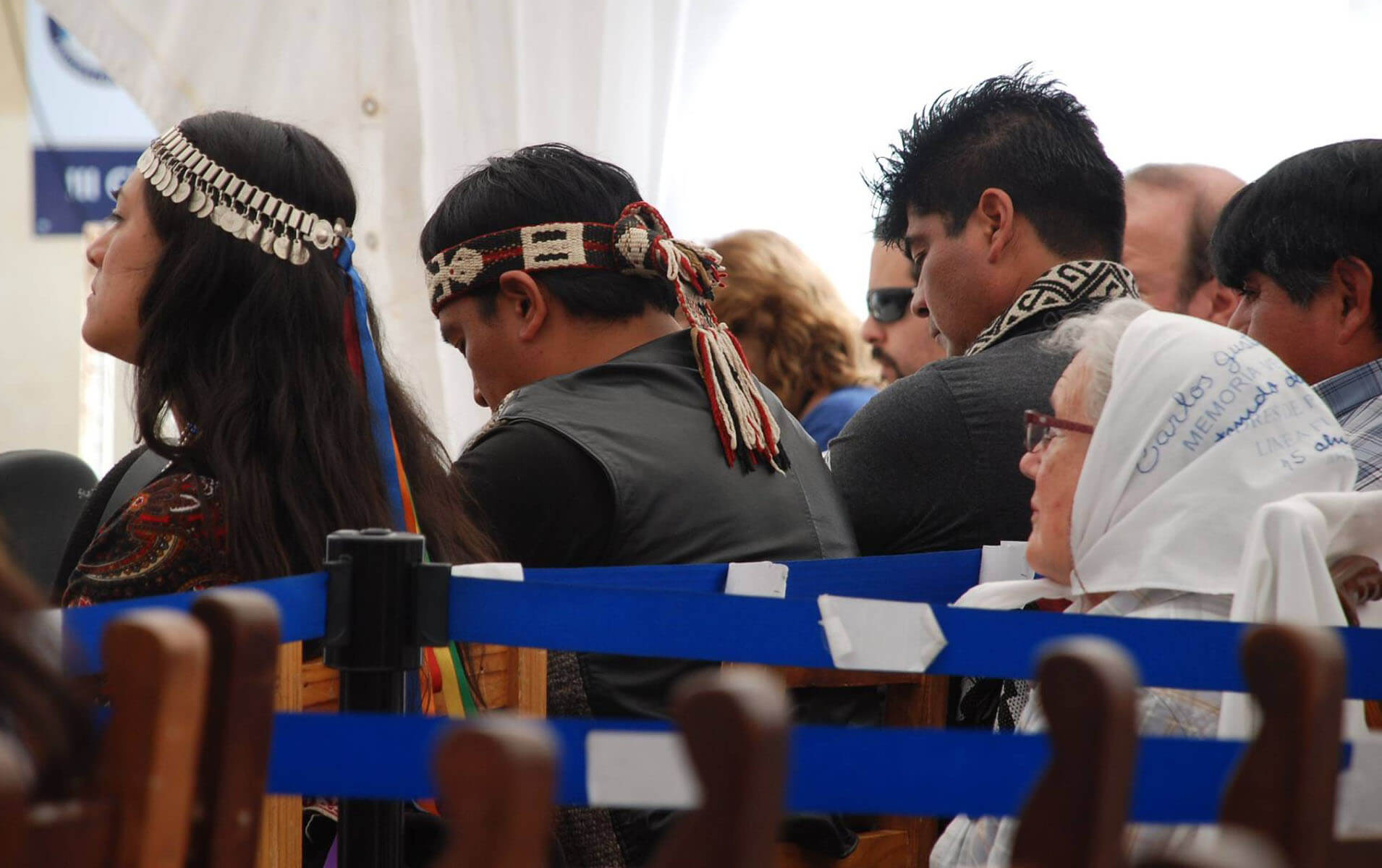 The public prosecutor called for a 15-year prison sentence — disproportionate given that eight years is the norm for manslaughter cases. A sentence as severe as this one required a trial by jury, enabling the defence, in line with the province’s new criminal code, to request an inter-cultural jury. The code stipulates that half of the jury members should come from the same social and cultural background as the accused.

And thus on October 27, Argentina’s first ever inter-cultural trial began with a 12-member jury, six of whom were Mapuche.

Over six days, the grave injustices suffered by Winkel Newen at the hands of both the oil companies and the judicial system were revealed.

Velázque Maliqueo testified to the human right violations committed by the oil companies, including his own experience working as a child in return for soda and bread. He told how, despite the community’s location beside vast oil fields, they do not have electricity, gas or running water and how numerous oil spills have polluted the community’s water sources.

Violeta Velázquez, Ñamku’s sister-in-law testified that months before the attempted eviction she had been beaten up, while pregnant, by a gang sent by the oil company along with her 70-year-old mother. Another witness, Juana Velazquez, testified that her son had suffered bullet wounds at the hands of security guards linked to the oil company. Both these cases were reported to the Office of the Public Prosecutor but no action was taken.

“How is it that when a Mapuche is shot, the judiciary does nothing, and today for having thrown a stone a Mapuche faces 15 years in prison?” Velasquez asked.

Silvina Ramírez, former president of the Argentinean Association of Indigenous rights lawyers testified that both the government and the oil companies have violated laws, in particular Emergency Law 26.160, which states that there should be no eviction of indigenous communities until territorial issues have been resolved.

The legal representatives of the oil company, police and doctors were witnesses on behalf of the prosecution. However, not only could no one point to evidence of attempted homicide, a number of irregularities also emerged. Although the judicial authorities maintained that they were in Winkel Newen on that day simply to notify the community of an imminent eviction, none of the prosecution witnesses could explain the presence of a police contingent or a digger belonging to the mining company, which made several attempts to advance on to Mapuche territory.

On the sixth day of the trial, Ñamku gave an emotive testimony in which she told of how her national identification document carries the non-indigenous name Carol Soae, that her Mapuche mother could not afford to look after her and she was adopted by non-indigenous parents. At this point, she broke into tears. “It is unfair to have to stand here and open up my private life, my humiliations, but I am going to do it because this is an unfair trial and I want everyone to know the truth.”

Relating the facts of December 28, Ñamku told the court room:

“We had just finished burying a baby that had been stillborn on the day Pelayes and the police arrived. Pelayes told us that we had to go because it was not our land, that we were not Mapuches. The digger began to advance, and the only way we had to defend ourselves and our territory was to throw stones. It was never our intention to hurt anybody, and after the event we made a public apology for injuries caused. Instead of me sitting here in the seat of accused, it should be the oil company directors, the governor and his ministers and members of the judiciary.”

On the morning of the eighth day, the jury was told it had 48 hours to reach a verdict. It took them just two hours. When the jury president announced the “not guilty” decision, the packed courtroom erupted with applause and cries of “marici weu!”

“The public prosecutor and oil companies in Zapala had a clear political intention with this trial, for it to be an ‘ejemplary punishment’ to intimidate and discipline other indigenous communities who defend their rights against the advance of oil exploitation in their territories,” said writer Maristella Svampa and law professor Roberto Gargarella. 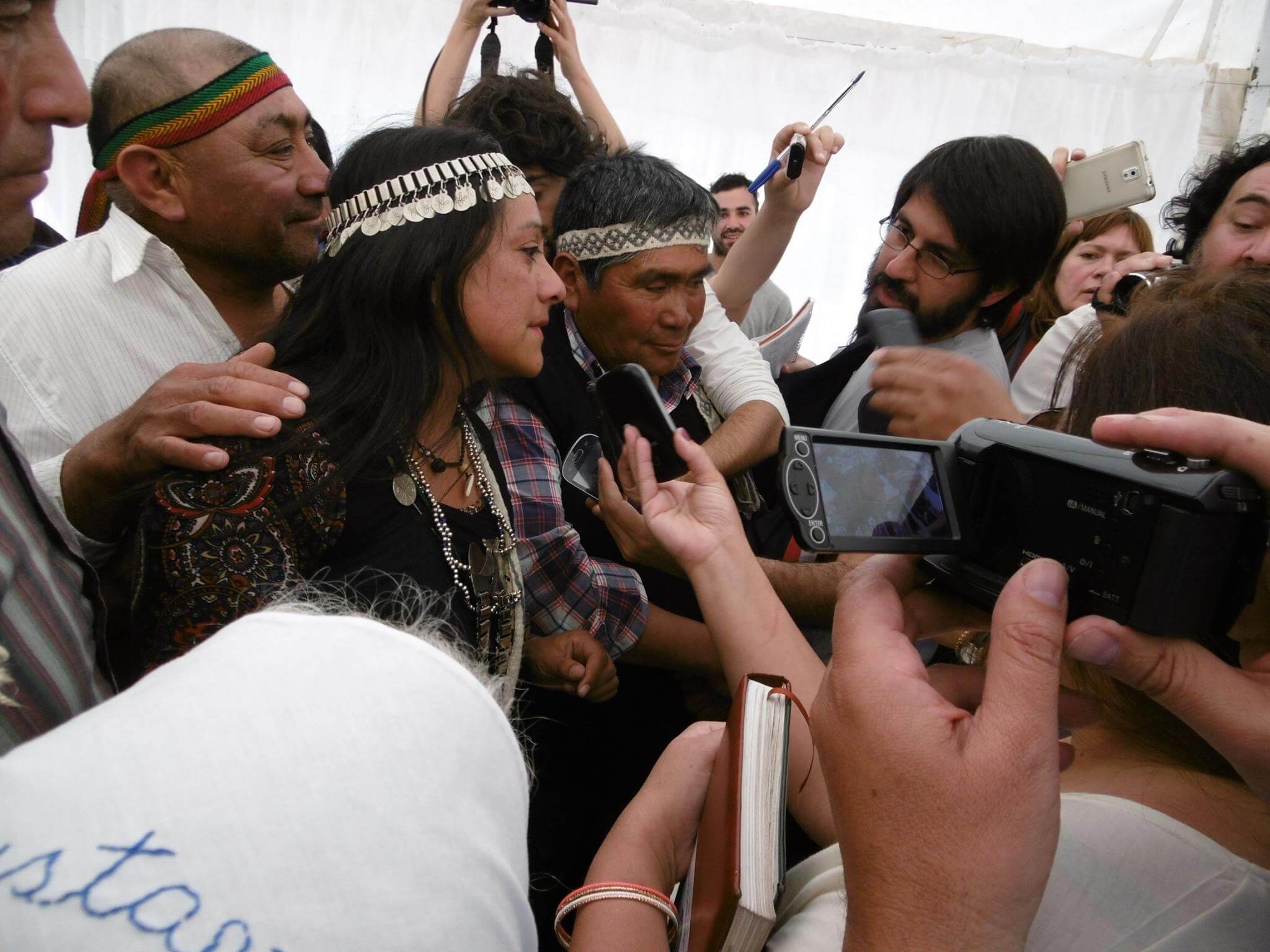 Their attempt failed and instead this historic trial marks an important step in curbing attempts to criminalize indigenous leaders defending their territory. According to reports, in the province of Neuquén alone there are 241 Indigenous leaders with criminal charges, 60 percent of which are related to land struggles.

“The decision made by the jury today is a sign of hope and a historic revindication of the rights of the Mapuche,” defense lawyer Dario Kosovsky said.

Outside the courtroom, where hundreds of Mapuche communities and representatives of human rights organizations had gathered, Ñamku was greeted with hugs, tears and deafening chants of “El Pueblo Mapuche vive, la lucha sigue y sigue ,” the Mapuche are alive, our struggle will go on and on.

“I am really happy,” Ñamku said. “This decision marks a historic precedent. Now we have the enormous responsibility of bringing our message of resistance to all the Indigenous Peoples who are persecuted and criminalized. Marichi weu!!”