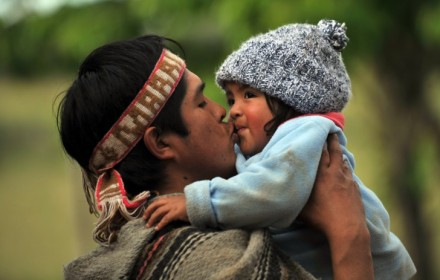 UPDATE, OCT. 5 – Mapuche in Angol Prison and 11 others (14 in total) have not ended the hunger strike due to some major concerns over the recent agreement. It has also been reported that “a representative from the Ministry of Health visited the 6 prisoners from Angol who are in the hospital at Victoria, and threatened to send them back to prison and let them die if they did not end their hunger strike. The prisoners insisted they will continue their hungerstrike, at least until the government agrees to definitively stop using secret witnesses. Currently, one single secret witness paid by the state is keeping 20 Mapuche in prison.”

ORIGINAL STORY – After a massive show of international solidarity, Mapuche representatives have reached an agreement with the Chilean government, marking a near-end to one of the longest hunger strikes in recent memory.

According to the Archbishop of Concepcion, Ricardo Ezzati, 30 of the 38 Mapuche protesters officially called off the hunger strike late Friday, after Chile agreed to drop all terrorism charges against the Mapuche civilians. At the moment, only the Mapuche in Angol Prison are continuing the hunger strike; though, it is believed they, too, will call off the strike in the next few days.

Unfortunately, it appears that charges themselves will not be dropped. According to the agreement, the Mapuche will still be tried, but as civilians under the common penal code.

This, of course, is a pretty far stretch from the Mapuche Demand for “freedom”; however, since so many of the charges are fabrications and, in effect “thought crimes” rather than actual crimes, there’s no way they’ll stand up in court. Not if reason has anything to say about it.

In addition to dropping the charges of terrorism, Chile says it will also take action “with various authorities and entities” to seek solutions “to the diverse issues that are part of the Mapuche cause.”

Hopefully, Chile will keep true to these words and genuinely act in the spirit of democracy and good governance. It would certinaly be a welcomed change from the desperation politics so common in Peru, Colombia and elsewhere around the world. Most of all, for the Mapuche who are simply trying to secure their rights and reclaim their traditional territories.

Courtesy of Mapu Express, here is the full text of the agreement, translated to English by the Project for Indigenous Self-Determination. The original, Spanish version of the text is available here.

Text of the Agreement

“[First:] It is public knowledge that the government has promoted legal reforms aimed at modifying the Antiterrorism Law and the norms associated with the trial of civilians in military tribunals.

“This willingness towards change is a part of our government’s agenda and responds to the democratic convictions and principles of our legal system, which are embraced in our Constitution, international legal norms, human rights, and ILO Convention 169, as well as in the recommendations from international organizations.

“Second: As a consequence of the ongoing legal reforms, the government’s understanding of the law now demands that it not pursue the terrorist claims presented under the presidency of Michelle Bachelet. This is the case because, under the new legal framework, the government does not believe that the events for which the Mapuche individuals have been implicated can continue being classified as terrorist acts.

“The government will thus proceed to dismiss all claims for terrorist acts and replace them with claims based on the common penal code. To this end, and for the knowledge of the parties, filings will be made in the appropriate tribunals within the next 5 working days. This decision has been adopted, in the perspective of the executive branch, for State reasons and the common welfare.

“Third: The government will continue to promote in Congress reforms to the Military Justice Code to ensure that civilians will be tried by ordinary courts, thus avoiding double jeopardy, and ensuring the due process rights that are recognized in the Constitution.

“Fourth: With regards to the other issues raised by the Mapuche individuals’ representatives, and to achieve the fulfillment of this agreement, the signatories agree to return to meetings with Monseñor Ricardo Ezzati, who will strengthen his support and commitment to undertake actions with various authorities and entities in order to continue seeking solutions to the diverse issues that are part of the Mapuche cause.

“Fifth: Several hours ago, we communicated this resolution to the representatives of those individuals on hunger strike, individually named in the attached document, who have indicated to us the decision of those represented to end the strike immediately. The government, through the Ministry of Health, commits itself to providing medical support and assistance to the strikers by providing professionals who will oversee their prompt return to health.

“Additionally, we mutually recognize the commitment and concern that the Mapuche individuals and the government of President Sebastian Piñera have demonstrated to resolve this conflict with the assistance of a facilitator from the Catholic Church.

“The parties trust that this will be the start of more appropriate interactions which will form the basis for a new relationship with the Mapuche People.