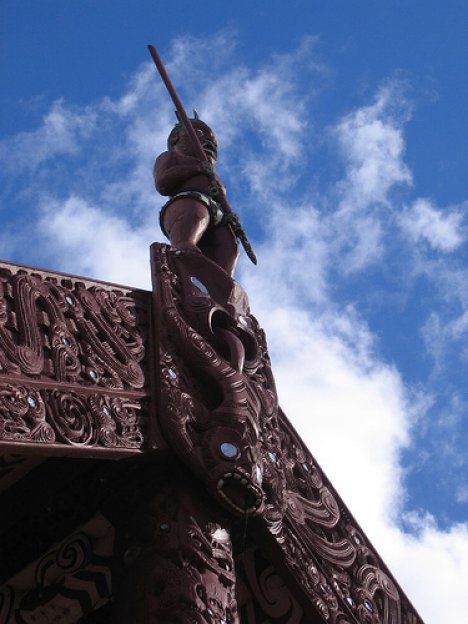 #Maori culture could be trademarked by TPP multinationals

Imagine a world where indigenous knowledge, language and customs are outright owned by multinational corporations and copyright enforcement is heavily backed by government police forces. Once the TPP is implemented, this sadistic dream could very well ooze into reality.

Land, language and family are the pillars of everything Māori (the Indigenous Peoples of Aotearoa New Zealand), yet all three are certain to be negatively impacted by the impending Trans-Pacific Partnership (TPP/TPPA). Sadly, Iwi (tribal) corporations and the so-called Māori elite have given little voice to the impending ramifications of the TPP on indigenous rights. Evidently though, indigenous advocacy movements have been left to make sure Māori tino rangatiratanga (self-determination) is not undermined by the TPP. Te Wharepora Hou, is a collection of Māori women primarily concerned with the wellbeing of tangata whenua and Māori stewardship of the Earth. The group have been an active voice against the TPP:

“As wahine Maori, our long and deeply-held traditional values and understandings of collectivity, of manaakitanga, of kaitiakitanga (Caring for Earth Mother), for Tangaroa (god of the sea) and for their children, is in direct opposition to what is being proposed in the TPPA. The New Zealand government has a responsibility to ensure Tangata Whenua have a voice in these negotiations as part of our Treaty partnership and our rights as Indigenous peoples.” (1)

Primarily as tangata whenua (people of the land), Māori are intrinsically intertwined with the ecosystem – Māori spirituality, family links (geographical indicators are included in a family tree), medicinal practices, traditional knowledge and customs are embedded in the indigenous relationship with Papatūānuku (the primordial Earth Mother) and her children. Like many other indigenous nations around the globe, Māori have been protesting against colonial and now capitalist ideologies that further take away indigenous sovereignty and further cement indigenous nations at the bottom of the socioeconomic scale. The scary thing about the TPP is that it won’t only affect indigenous free-hold land (or land waiting to be settled by the corresponding governments) nor will it just push our people further into poverty. The TPP will give multinationals the right to exploit and rape the ecosystem and further aid them in the acquiring of enforced trademarking and copyrighting of indigenous intellectual property and cultural/traditional knowledge.

Iwi leaders and the corporate arm of tribal organizations need to show their blatant disregard for the TPP, as it will significantly impact the majority of Māori. Traditional knowledge like rongoā (medicinal practices and customs), carving, weaving, and even the Māori language are in danger of being hijacked by TPP investors. Indeed, Auckland University law professor Jane Kelsey, a forefront activist against the free trade agreement, says that tribal leaders need to see the ecological, socio-economic and intellectual property fallout that will transpire once the TPP is employed.

“It is also likely to lead to more Māori names being trademarked by foreign companies, and traditional knowledge about things like rongoā or natural medicine being claimed by companies.” (2)

Last week WikiLeaks released the TPP draft chapter on ‘intellectual property’; its heavy silhouette (95 pages) confirms the corporate threat to indigenous self-determination and ownership rights over traditional knowledge and practices. In Article QQ.E.23 (traditional knowledge, cultural expressions, and genetic resources), the New Zealand govt. clearly opposes the “informed consent or approval and involvement of the indigenous or local community holding such knowledge”, before user rights (and later on copyright and trademark rights) are given to TPP members and their corresponding investors (multinational corporations). If Iwi leaders do not comprehend the threat of Māori culture being trademarked by TPP multinationals, than they would relegate themselves to the same geopolitics as colonial governments.

Clearly the trickle-down theories of neo-liberal economics and free trade agreements have not been favourable for indigenous rights and wellbeing. Scarier than the TPP’s ability to strip indigenous intellectual property of all ownership, is the absent voice of corporate tribal leaders. Yet again it has been the grassroots movements that have stood up for tino rangatiratanga, hopefully though our leaders will see the need to protect indigenous land, language and families from the capitalist grasp of the Trans-Pacific Partnership treaty.