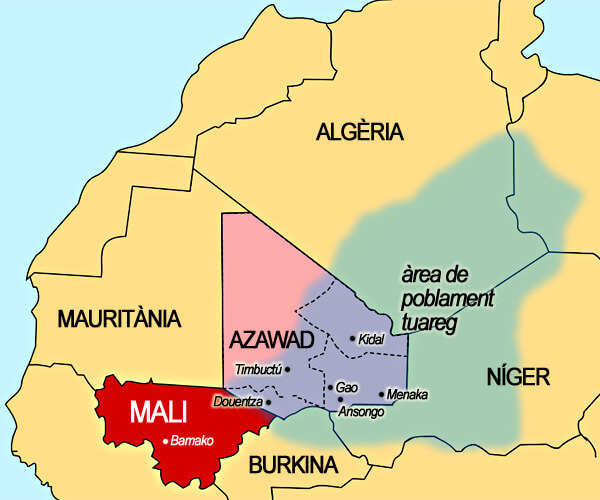 At least 8 dead after armed clash between Malian army, Tuareg rebels as Malian Prime Minister visited the town · Tuareg sources blame Malian soldiers for having started the clash when suppressing a demonstration · The MNLA says is holding “prisoners of war”, several buildings have been re-taken by guerrilla

Clashes between the Malian army and the Tuareg-majority National Movement for the Liberation of Azawad (MNLA) resulted ​​this weekend in at least eight deaths in Kidal, the main town in north-eastern Mali. After the clash, Prime Minister of Mali Moussa Mara said his country was again “at war” against the MNLA, with whom Bamako has been unsuccessfully negotiating a solution to the conflict that erupted in 2012 for control of Azawad (northern half of Mali).

The account on what happened this weekend in Kidal is quite different depending on the sources. The Malian government said on Saturday that an armed clashed between the Malian army and the MNLA left 36 people dead: 8 soldiers and 28 guerrillas. The violent outburst was triggered by the visit to Kidal by Mali’s Prime Minister Moussa Mara, who landed on Azawad for the first time since he was appointed last month after the resignation of Oumar Tatam Ly. A part of the Malian press admits that it was a bad idea that Mara visited Kidal, because it was foreseeable that his presence there would raise tensions among the local population.

Tuareg news agency Toumast Press goes for a quite different account. According to it, on Friday Kidal was the scenario for demonstrations against the upcoming visit by Mara. The army opened fire against the protests with fire, and still according Toumast Press, Malian troops then attacked MNLA positions and sparked the confrontation. The result, the news agency argues, was ten Malian troops dead, plus “several” civilian casualties. The MNLA regained control of several buildings, including the radio station, the provincial governorate and the local treasury.

In addition to the fatalities, Mali said that the MNLA had kidnapped 30 Malian officials in order to exchange them for imprisoned guerrillas. In a statement on its website, the Tuareg guerrilla denies having kidnapped anybody, and only admits having made ​​”prisoners of war arrested after the fighting,” for which it blames the Malian army.

After an offensive in early 2012, the MNLA gained control of much of Azawad, and declared independence from Mali. But MNLA control over Azawad only lasted for a few months, given that several Islamist groups captured the main cities in Azawad, including Timbuktu and Gao. After a French intervention to save the Malian state from collapsing at the beginning of 2013, the MNLA and Mali reached an agreement under the auspices of Burkina Faso to redeploy the Malian army in Kidal and to garrison MNLA members.

Since last year, however, there have been no more significant advances. The MNLA has agreed to give up independence claims, and has been proposing an autonomous regime for Azawad within Mali instead. The Malian government, however, has not accepted this proposal. The last attempt to find a solution was launched by the Malian government last month, when former Prime Minister Modibo Keita was designated as coordinator of a new round of negotiations that should involve not only the MNLA and Mali, but also neighboring countries Algeria, Mauritania and Burkina Faso, each with their own interests and agendas regarding Azawad.

Moreover, and as usual in previous Tuareg rebellions, splits within the rebel movement have appeared. The most recent one was announced in March, when former MNLA leader Ibrahim Ag Mohamed Assaleh left the movement to form his own group, the Coalition for the People of Azawad (CPA).

The CPA is not the only movement speaking in the name of Azawad apart from the MNLA. Leaders and fighters formerly belonging to Tuareg Islamist group Ansar formed last year the High Council for the Unity of Azawad (HCUA). Besides, the Arab Movement of Azawad (MAA) says it is representing the territory’s Arab communities. Like the MNLA, it faces internal dissension. MNLA, HCUA and MAA maintain a fragile agreement to jointly negotiate before the Malian state on behalf of Azawadian interests.