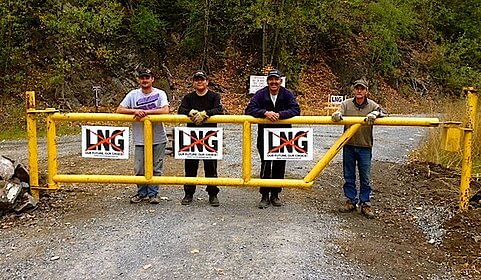 The pipeline would supply gas to the Petronas LNG plant on Lelu Island
Support our journalism. Become a Patron!

VANCOUVER – Luutkudziiwus, a Gitxsan Nation House Group, will file a legal challenge in regard to the BC regulatory permits awarded to the Prince Rupert Gas Transmission (PRGT) pipeline that would supply gas to the Petronas LNG plant on Lelu Island which threatens to decimate Skeena River wild salmon. Luutkudziiwus Hereditary Chiefs travelled down to Vancouver to make the announcement today, while government and industry are gathered at the 2015 LNG Conference in BC.

“We are taking the government to court over the lack of consultation, inadequate baseline information presented, a weak and subjective impact assessment, and the current cumulative effects from past development. People from all over northern BC are now outraged about the $40 billion Petronas LNG project. It is unbelievable that they claim they consulted with us,” says Luutkudziiwus spokesperson Richard Wright.

TransCanada’s proposed 900 km PRGT pipeline, contracted under Petronas, is slated to cross 34 km of Luutkudziiwus traditional Madii Lii territory on its way from massive fracking operations in Treaty 8 territory to the proposed Petronas-led (Pacific Northwest) LNG plant on Lelu Island in the Skeena estuary. Lelu Island is the tribal territory of the Gitwilgyoots of Lax Kw’alaams.

“Our Madii Lii territory is not to be played with by the province of BC in their LNG game. Clark’s LNG dream is a nightmare for us. While she tries to maintain a shiny picture of LNG in their conference this week, the reality is that First Nations are being bulldozed, and we have had enough,” says Hereditary Chief Luutkudziiwus (Charlie Wright).

Luutkudziiwus will ask BC Supreme Court to quash the Environmental Assessment Certificate and the BC Oil and Gas Commission permit to construct and operate the PRGT pipeline. These permits were not based on any substantive consultation, infringe upon Luutkudziiwus’ rights and title by allowing a pipeline which will cause adverse effects to fish and their habitats, wildlife and their habitats, terrestrial and aquatic resources, including cumulative effects, as well as to social, cultural, and economic values. In bringing their lawsuit, Luutkudziiwus is looking for consultation from BC government and will also ask the court to direct the Province of BC to consult with them before any permits are issued.

“The province has been stealing from our territory and culture for 150 years, and this needs to end. The proposed pipeline and LNG project is in deep conflict with core Luutkudziiwus interests and values,” said Hereditary Chief Xsim Wits’iin (Lester Moore).

“We want the BC government to respect our constitutionally protected Aboriginal rights with a true reconciliation process that honors healthy families and increases community health and education. Development within our traditional territories must have our Free, Prior and Informed Consent and stop tearing apart our communities” says Luutkudziiwus spokesperson Pansy Wright.

A delegation from Luutkudziiwus will be in Vancouver on Oct 14th, and will be available for interviews downtown or near the Vancouver Convention Centre on request.

For more information, photos, or to arrange interviews, please contact: