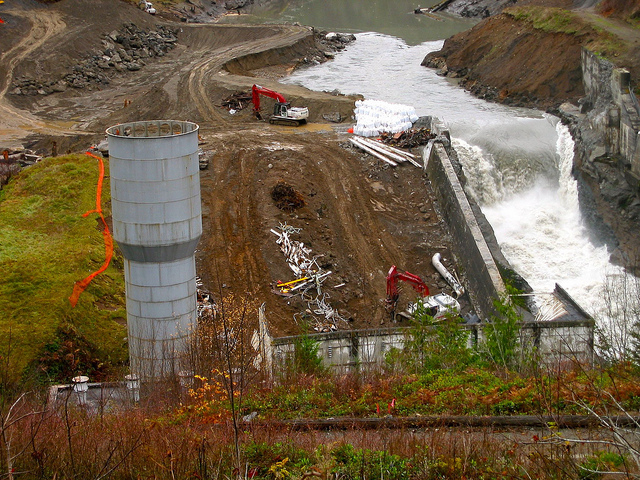 The Lower Elwa Klallam, a federally recognized Indigenous Nation located on the Olympic Peninsula in Washington State, have had much to celebrate in the last month: the discovery of a ‘Legendary’ sacred site, the uncovering of archaeological evidence for ancient inhabitation of the Elwha river area, and the return of the salmon run to the Elwha’s middle range. All of this has been able to take place because of the removal of an almost century old dam.

The Elwha and Glines Canyon Dams

The Elwha river has been key to Lower Elwha Klallam life since time immemorial, a relationship that continues to this day, even though that relationship was radically altered in the early 1900’s, when two dams were placed across the Elwha. The first of these, the Elwha river dam, was completed in 1913 as the Olympic Power and Development company sought to generate energy using the river. This was followed soon after by the Glines Canyon Dam lying further up river, effectively splitting the Elwha into three sections. Top, above the Glines Canyon Dam; Middle, between this and the Elwha Dam: Bottom, below the Elwha Dam. These impositions along the rivers natural course altered the character of the watershed, with profound natural and cultural consequences. Fish migrations up river were blocked as designers had not thought to include fish ladders in the builds, indigenous fishing activities were hindered and the equilibrium of the local ecosystem skewed and damaged. In addition, the Elwha Dam alone flooded two hundred and sixty seven acres of land of cultural significance.

After well over half a century in operation, action was finally taken to reverse the ecological and cultural damage caused by the dams. In 1992 the American Congress mandated the full restoration of the Elwha’s ecosystem and natural fisheries to be achieved via the Elwha River Ecosystem and Fisheries Restoration Act which was passed in 1995. The involved authorities found that the best course of action to achieve their goal of restoring the Elwha was the complete removal of both dams, a process which began in 2011. The Elwha dam has now been completely removed; its Glines Canyon partner is around half way through demolition.

(Re)Discovering the Secrets of Dried Land

The joy felt by the Lower Elwa Kllalam at the Elwha dams removal this year has been complimented by two subsequent revelations. The first of these involves the re-discovery of a sacred site strongly linked with the peoples’ creation stories. In two deep rock depressions the Klallam creator spirit is thought to have bathed and blessed the indigenous peoples of the area who believe they originate directly from the area. The notion that such a site should actually exist may not have been surprising to elders such as Ben Charles, who reports having seen it beneath the waters in his youth. Yet, despite the testimony of elders and records of the rock passed on in oral and written history, its Atlantis like submersion from sight meant that many younger Klallam believed it to be only a legend.

Thanks to the reclamation of land flooded by the now non-existent Elwha dam all Lower Elwha Klallam are now capable of seeing for themselves that the legends are true. Revealed by the waters’ recession, the rock site is visible for the first time in nearly one hundred years, a potent visual symbol of the tribes deep connection with the area. Those who have attended the stone already report a profound experience, noting not only the power of the rock but also that “everything is coming back to life” now that the dam is gone. After revelling in this rejuvenation of a sacred place, a number of people filled amulets with water from the depressions to give to their elders who told them of this place, themselves filled with joy that “it isn’t a myth…it’s a reality” in the words of Tribal Chairwoman Frances Charles. The elders and other members of the tribe have expressed their own deep desires to make the newly possible journey over difficult terrain to see the hallowed stone. This is a trip made all the more important given that Lower Elwha Klallam “don’t have migration stories from other places” according to Klallam language instructor Jamie Valadez, whose insight illustrates the significance of the creation sites physical existence for the community.

The second discovery made possible by the removal of the Elwha dam is the unearthing of archaeological evidence of a site marked by human use which radiocarbon dating puts at eight thousand years old. This makes the find one of the oldest known on the Olympic Peninsula, potentially strengthening Lower Elwha Klallam claims concerning the antiquity of their inhabitance of the area. This may aid the group in their next endeavour as they seek to become the stewards of the land revealed by the ebbing dam lakes. The National Park Service is currently charged with looking after the areas and has kept the location of both sites mentioned here a secret from all but the tribe to protect them. It is their intention to launch a public process to decide what the land is used for and who will care for it. The ceding of the land to the tribe is one option under consideration, and a demonstrable archaeological link to the ‘new’ land may certainly help their case. Making the newly dried land a national park or wildlife refuge are believed to be other options under consideration.

The Lower Elwha Klallam have also had reason to celebrate a natural phenomenon as important to their and their ancestors daily lives as the newly revealed cultural treasures. Forty tribe members gathered on the East bank of the Elwha recently to give thanks for the return of the king salmon, also known as chinook, to the river. After the dams were constructed the fish were only able to progress a small distance up the Bottom section of the river from the sea to spawn, forcing the fish population to plummet. With the Elwha dam gone, eight more miles of the ‘Middle’ river are now accessible to the fish, as are a number of smaller tributaries.

King salmon have been spotted on numerous occasions by biologists in recent days in the upper reaches of this section. It is the first time since the parks establishment–in 1938 after the dams were built–that salmon have naturally migrated into this area. Other species such as steel head trout have also been seen in these regions recently, suggesting a remarkable recovery is in progress. This recovery will be further aided by the full removal of the Glines Canyon dam, scheduled for completion by summer 2013, which will re-open a total range of over seventy miles of river. It is hoped this will restore the river to close its original state when numerous different species of anadromous fish made migrations into the higher reaches of the river, migrations which were no doubt vital to survival for the areas Indigenous Peoples.

Experts know that returning the Elwha to this state will take years of hard work to achieve; but the signs are encouraging and much of the required graft is being put in. The Lower Elwha Klallam are themselves playing a vital role in this ecological restoration effort, setting up, in partnership with the National Park Service, the new Lower Elwha Klallam Fish Hatchery. This is a venture dedicated to maintaining fish numbers and introducing more fish into the upper river during dam removal to ensure that the precious fish are cared for and will thrive in future. A five year moratorium on all fishing activities has been put in place to aid these efforts.

It is intensely unusual that good news follows on from headlines concerning indigenous peoples and large damming projects. In this case, however, through the uncovering of key cultural sites and the efforts being made in respectful partnership toward restoring ecological well-being, a hopeful story emerges. This is, there can be no doubt, due to the fact that the Elwha dams are being taken down, not put up. As a result, it is the adaptability, expertise and astounding memory of both Indigenous Peoples and the earth that are able to take centre stage here. Yet such a hopeful example of natural and cultural reinvigoration should simultaneously make us aware of the incumbent dangers facing lands and peoples confronted by damming projects today. The stories arising from these current initiatives are often ones of marginalisation and threat rather than promise. It is due to this overwhelming negativity that we can see what the Lower Elwha Klallam’s redemptive story truly illuminates. Bio-cultural health and the healing process that de-constructions can bring, is what stands to be lost if similar construction projects go ahead. There is hope here but it is janus faced, accompanied by warning.