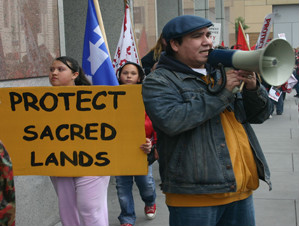 This is a trailer for the upcoming film series Losing Sacred Ground by the Sacred Land Film Project. Currently, the series is about half way through the production phase. Once completed, in 2011, the series will be aired on public television.

Giving voice to Indigenous People around the world, Losing Sacred Ground exposes “the greatest environmental and cultural challenges of our time as viewed from the unique perspective of indigenous elders and activists:” the ongoing (even, deliberate) sacrifice of sacred land by governments, corporations and non-profit groups.

The series focuses in on eight particular stories on five continents, including: Winnemem Wintu’s struggle over the Shasta dam in northern California, the preservation efforts of the Altai people in southwestern Siberia and the Q’eros people of Peru, and the Gamo’s struggle with tree cutting and encroachment in Ethiopia’s Rift Valley.

Highlighting a diversity of struggle that is often overlooked, the series will also explore the world’s growing land rights movement, a world-wide effort to protect biological diversity and preserve traditional ways of life for future generations. Indeed, it is a movement for life itself.

If you’d like to learn more about the film, please visit www.sacredland.org