Letter from CONAIE to the Ecuadorian President Rafael Correa 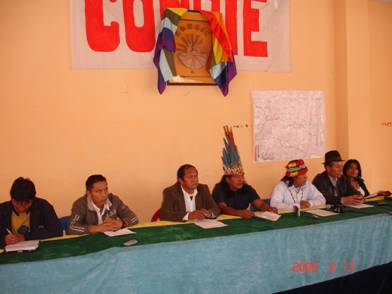 Courtesy of Red Amazon, here’s a letter that was sent last month to Ecuador’s President Rafael Correa Delgado by the Confederation of Indigenous Nations of Ecuador (CONAIE).

This is being posted to add some proof against the myth that “only outsiders oppose development.” As it has always been, the People speak for themselves.

English Version of the Letter

Fraternal greetings from us who are members of the Confederation of Indigenous Nations of Ecuador (Confederación de Nacionalidades Indígenas del Ecuador, CONAIE).

We indigenous nations and peoples, and peasant communities, jointly with the organized social sectors of Ecuador, have firmly resisted neoliberalism and the dominance of imperialism which has done everything possible to impose its economic and political model. For the peoples this has meant the plundering of lands, territories and natural resources, the dismantling of the State, the impoverishment of the majority of Ecuadorians and the criminalization of social struggles, among other consequences. But, while resisting, we have put forward proposals which would permit the State, and Society as a whole, to overcome every model that implies domination, dependence, discrimination and cultural, environmental and economic destruction of the peoples.

We peoples of Latin America are pushing forward processes of profound change, showing that we human beings can live in harmony with Mother Nature. These processes are not easy; the leading sectors of political and economic power, which have controlled our countries, seek to destabilize progressive governments and social organizations. But the peoples’ determination for a better world is irrevocable.

But neoliberalism is not yet destroyed; the social conflicts which it has provoked remain active. In Ecuador, especially in the last ten years, the various neoliberal governments have conceded some four million hectares of territory for mineral exploitation; 166 rivers are affected by private construction of hydro-electric plants; some three million hectares have been deforested by the timber industry, and five million hectares given over to private oil exploitation, Petroecuador alone having seven hundred thousand. All this has done no more than ruin the national economy, destroy biodiversity and create thousands of social conflicts with indigenous peoples and peasant and Afro-Ecuadorian communities.

For this reason, and in compliance with the resolutions of the Third Congress of the Indigenous Nations and Peoples of Ecuador (CONAIE), held in the town of Santo Domingo de los T’zachilas on 10, 11 and 12 January 2008, with the participation of delegates and representatives of the 14 Nations and 16 Indigenous Peoples, coming from the three regions of the country, we bring the following to your attention:–

1. CONAIE supports people affected by flooding and holds previous governments responsible for failure to take timely and adequate measures for avoidance of such disasters.

2. We reject the military invasion and aggression of Álvaro Uribe’s Colombian government, which, with the complicity of George Bush’s government, seeks to involve the countries of the region in the armed conflict, with the twofold aim of spurning political solutions to the armed conflict in Colombia and destabilizing the progressive governments of the region, with no other purpose than to control and appropriate natural resources (water, oil, minerals).

3. To defend the proposal for a Plurinational State, since that is the most democratic means of resolving the problems which have historically dogged the country and is a new form of political, economic, juridic and cultural organization of the State and of the whole Ecuadorian nation within a framework of intercultural, direct, equitable and economically just democracy.

4. Reversion of all mineral concessions to the State. No medium- or large-scale mining, and concessions for small-scale artisan mining to be subject to an inquiry, strictly regulated, and with limits to its expansion. Action should be taken for agricultural and environmental restoration of the areas degraded by mining.

5. We demand reversion of private hydro-electricity concessions, since they cause prejudice to the State and have involved non-compliance with what is established in the Constitution (the right to consultation, the principle of precaution and the indivisibility of rights). They put the country’s food sovereignty at risk, and by privatizing areas of wilderness and biodiversity (springs, rivers) they likewise threaten the integrity of communal lands and territories.

6. Respect on the part of the State for the Right to Consultation and Free Consent of Indigenous Peoples with regard to any projected exploitation of natural resources within indigenous and community territories and land, as ordered by the Political Constitution and Resolution 169 of the International Labour Organization.

7- That the National Government should provide political and judicial support in the High Court of Nueva Loja to those affected by Texaco’s oil operations in the Northeast. Likewise, and in accordance with what is established by the Constitution, the State must ensure respect for national sovereignty and must guarantee the rights of Ecuadorians in the actions brought by the transnational Texaco in international arbitration tribunals.

8. That the protection and administration of wilderness, forest and such other natural areas as ecological reserves, protected areas and national parks within indigenous territories should be handed over to the communities.

9. Respect for indigenous and ancestral territories and for the express decision against exploitation of natural resources within their communities, as foreseen by the Political Constitution, Resolution 169 of the International Labour Organization, and the Declaration on Indigenous Rights of the United Nations Organization.

10. We demand that the State of Ecuador must investigate the causes of the slaughter of the Taromenanes and Tagaeris and punish those responsible, and must also respect and protect the territories of those free peoples as the sole guarantee of their culture and their lives. For these reasons we wupport the initiative of retaining below ground the oil in the ITT block.

11. To comply with the pronouncement of the State Attorney General’s Office regarding expiry of the oil contract with Petrobras, of oil exploitation in Block 18, and we demand inclusion in this process of Block 31 for the same reasons.

13. To declare national suspension of industrial and commercial timber exploitation, because it is destroying native forests, affecting the global and local environment and directly affecting the territories of indigenous peoples, since 80% of those remaining live in those territories.

14. We demand from the government policies leading to avoidance of privatization of biodiversity, practised by means of the sale of environmental services and bio-piracy

15. The regionalization project, as part of the proposal for territorial re-ordering, must not affect the integrity of indigenous territories.

16. We support all the initiatives that the national government has taken and may take in future which seek to demand from the Colombian government respect for territorial sovereignty, together with political and judicial action to prevent continued fumigation in the border area and to compensate for the damage already caused to the environment and human health.

17. Immediately to rescind the Manta Base agreement signed by the Ecuadorian and United States governments.

20. We ask the government for strict control of rising prices and for fixing of the prices of the basic family shopping-basket.

21. We defend the legitimacy and legality of peoples in defence of their collective and individual rights, and we therefore denounce their criminalization.

It is our aim to work for and contribute to the changes which we all need, and to build the kind of country which would guarantee collective and individual rights and the economic and socio-cultural wellbeing of all Ecuadorians. To that end we see an urgent need to dismantle all the neoliberal policies imposed in the past twenty years.

With fraternal greetings we look forward to your reply.