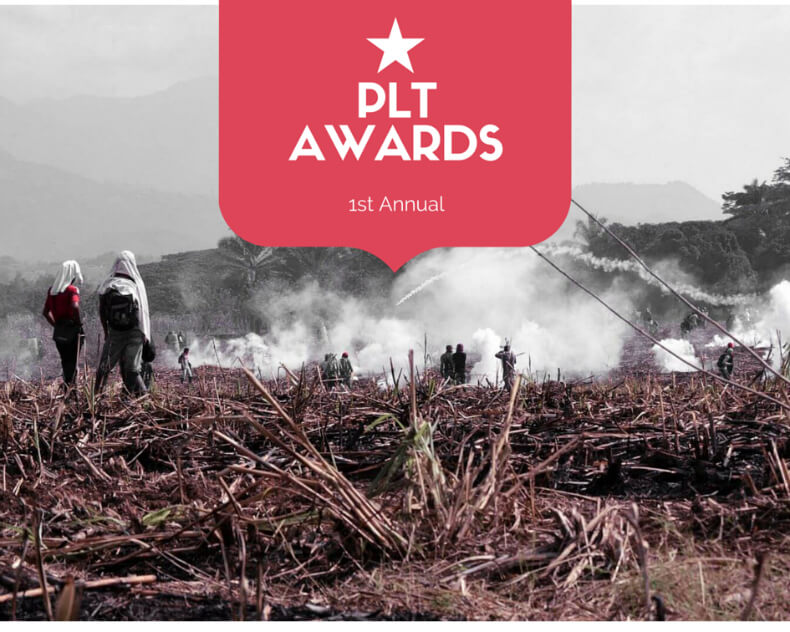 Now that the 1st Annual People Land Truth Awards (PLTA) have come to an end, it’s time to take a look back for some lessons learned. Did we make any mistakes? Was there something we could’ve done better? Was anything missing? Once we know where we have been, we can get a better sense of where we need to go for next year’s awards program.

This year, the PLTA was about stepping over the divide that exists between reader and journalist. Our path of choice: a humble platform that would give our readers a chance to vote on their favorite articles at Intercontinental Cry Magazine.

The awards program played out over the course of two months. During the month of August, all of IC’s editors, contributors, advisors and monthly donors (benefactors)–along with the CWIS Board of directors and a few special guests–joined forces to create a list of nominees from the articles that were published on IC over the past 12 months.

Once September rolled in, we gathered up the list of nominees and opened our doors to the main event: a public contest in which our readers could vote on any or all of the previously nominated articles.

During the month-long vote, we ran into an unexpected mountain of technical problems. Sometimes people couldn’t vote or votes weren’t counted, sometimes the PLTA page was blank, sometimes browsers crashed. It was quite the headache.

As the principle designer of PLTA, I did my best to take down this man-made mountain; but in the end, all I could really do was ask people to clear their cache and try again. This hurt the PLTA quite a bit.

Despite this setback, there was some great competition between France Rivet and Sandra Cuffe, whose contributions stood neck and neck for pretty much the entire month.

But even so, we were expecting to see a much larger voter turn-out. Our readers just weren’t as enthusiastic about this as we were. I think there was a couple reasons for this. Technical problems notwithstanding, we didn’t spend much time advertising the PLTA or put together some kind of promotional campaign to get people pumped up. The limited focus of PLTA probably hurt us a little as well. Originally, I wanted the awards program to consist of several categories including best film, best commentary, best breaking news and best feature. In the end though, I couldn’t find a free/open source real-time voting infrastructure to let us do that.

The 1st Annual PLTA was nothing if not a learning experience. And now that we have learned, the PLTA can grow.

For starters, next year’s PLTA should really have a dedicated website comparable to the Webby Awards and the User Experience Awards.

Second, we have got to find a way to expand the focus of the awards program. As previously noted, we should cover best film, best feature story, best essay, best commentary, best breaking news.

But why stop there? There’s a lot of excellence in this world of ours, some of which is probably hiding in your bookmarks. We can put a spotlight on all of it: best short film, feature-length film, webdoc, podcast, radio show, magazine, book, photograph, online publication, infographic, investigative journalism program, you name it.

We can take it even further by shining some light on extremely useful tools and services like Disconnect, a firefox plugin that stops corporations like Facebook from tracking you; or Ushahidi, an open source project that allows users to crowdsource crisis information that can be uploaded to the net via mobile phone.

We can have some fun too. Most ridiculous psywar campaign. Lamest use of propaganda in the media. The biggest lie that went viral. I’m sure we could come up with a good ten more award ideas here if we put our minds to it!

And, we could dig our heels in deep. Jeff Corntassel suggested that we could do something similar to the Public Eye Awards and the old Captain Hook Awards for Biopiracy with an Indigenous twist. For example, people could vote on who they think are the ten worst governments, corporations and NGOs. Let that sink in… An epic idea like this just might need an awards program all to itself.

Depending on what direction we go here, a name change may also be in order. We’ll have to give it some thought.

More importantly though, next year’s awards program is going to need a budget. Some sponsors or partners would be cool too. And of course, we could use a promotional campaign and a dedicated team to help out. It’d be nice to have some prizes as well, but that’s pretty low on the priority list. After all, the main thing here is to honour those among us who do exceptional work.