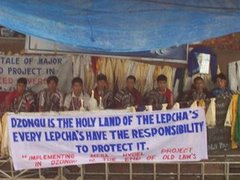 Lepchas Vow to Die for Their Community

More than 20,000 Lepchas have vowed to die for their community and to ensure that their culture survives for coming generations.

A peaceful and nomadic people in the Sikkim region of West Bengal, the Lepchas gathered this past weekend in Kalimpong to celebrate the 227th birthday of their King Gyabu Achok.

“The occasion emboldened the Lepcha community, which has been recognized as an indigenous tribe by Charter 309 of the United Nations and is striving to protect their ethnicity and region of Dzongu in Sikkim,” comments The Statesman.

One of three indigenous peoples in Sikkim, the Lepchas, who call themselves Rongpas (ravine dwellers), is simultaneously working to stop a series of hydro projects proposed for the Dzongu river in north Sikkim.

The dam project threaten to displace a number of Lepcha, devastate the region’s biodiversity (i.e. the Khangchendzonga Biosphere Reserve), and destroy what the Lepcha believe to be the birthplace of humanity.

To date the Lepcha have successfully campaigned to stop four of six hydro dams. “Two projects have not been scrapped yet and a relay hunger strike is still in progress to scrap them,” says Samden Fonning Lepcha, general secretary of the Darjeeling Lepcha Youth Association. “This is probably slated to enter the Guinness Book as the longest hunger strike in the world.”

During the birthday celebration of King Gyabu Achok, three Lepcha youths were awarded for their role in the hunger strike, lasting 86 days without any food.

ILTA president, Ren LS Tamsang Lepcha also took the opportunity to put out the call for unity, stating, “We should focus on uniting the entire Lepcha community. I take this opportunity to congratulate all the Lepcha people for preserving our culture, customs and language so that we will continue to be Lepcha in our heart and soul.”

Here’s a petition you can sign to support the Lepcha in their continued effort to protect Dzongu.