Leonard Peltier Sent Back to USP-Lewisburg 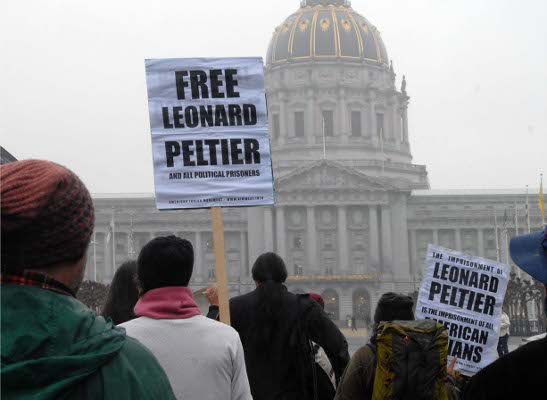 64-year-old Indigenous activist Leonard Peltier has been transferred back to USP-Lewisburg in Pennsylvania, removing him from the immediate danger he faced at USP-Canaan, where, shortly after his arrival two weeks ago, Peltier was viciously attacked by two inmates.

The attack is widely considered to have been orchestrated by the FBI, who has apparently release a letter that encourages “others to indulge in whatever activities they can to block a possible pardon by President Obama for Leonard Peltier,” writes Kari Ann Cowan, Office Corodinator for the the Leonard Peltier Defense Offense Committee (LP-DOC).

After sustaining numerous injuries to his head and body, Peltier was placed in solitary confinement where he was denied food, medical care, and access to both his family and his attorney.

Following the attack, which was utterly unprovoked, Peltier received a wave of national and international support, which fortunately led the way to his return to Lewisburg a couple days ago – where he received a “heroe’s welcome” and assurances from other inmates that he is now safe.

“It is so ironic that the prisoners in a federal maximum-security prison can guarantee my safety, but the Bureau of Prisons will not,” states Peltier. “I did not say, ‘cannot’, but ‘will not’ do so. You have to remember the BOP is a little brother to the FBI and they came from an illegitimate mother called the JUST-US (Justice) Department.”

He continues: “Do I sound a little angry? Well, I am angry that many of my friends have died in assuring my survival while I’ve been in prison. All the men who were involved in my escape at Lompoc, all died mysteriously soon after: Dallas Thundershield at Lompoc, Bobby Garcia at Terre Haute, and Rocky Duenas, whose body was never recovered. And Standing Deer, he gave away his life when he revealed the assassination plot against me. He lived under the shadow of death for years, waiting to be killed for defying the government, until he was eventually paroled to Texas. He was murdered soon after the same person who contracted him to have me assassinated warned him about his involvement with my campaign. Surviving this attack brought back memories of those losses, and it is with tears of more gratitude in my eyes and in my heart that no one died this time. I don’t ever want to lose another brother in protecting me; a human life is precious and important.”

“I know in other countries, prisoners who have been held by their government have been placed in house arrest after they have attained international support as I have. If the BOP cannot guarantee my safety to the extent the prisoners here can, then I demand to be returned to my nation, Turtle Mountain, where I can be assured of my safety!”

“Turtle Mountain has issued a resolution to transfer me into their custody, and they have asked to meet with Obama on a nation-to-nation basis. This has to happen and it will when a lot of energy is placed behind it. In the past 18 days your efforts brought me out of the hole and to where there is a measure of safety.”

“The FBI has said that I will never leave prison alive, and we should not accept that as an idle threat. There have been a few times that my life was targeted by the FBI in the 33 years since my capture, and each of those who have helped me to survive are now dead. The transfer and attack at Canaan is just a warning to me of what is to come.”

If you would like help make sure Leonard Peltier’s life is never again threatened, and that he is once and for all released from prison, the LP-DOC asks you to send letters, call, and/or e-mail the director of BOP.

Contact information and a sample letter can be found here: www.whoisleonardpeltier.info/alert.htm