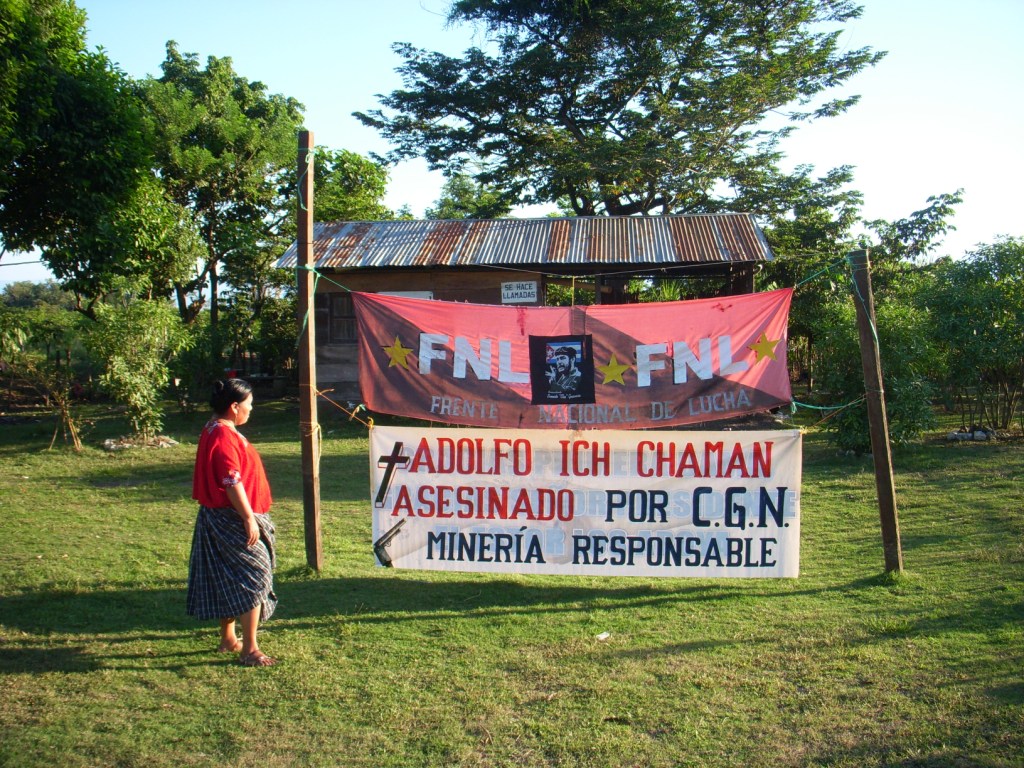 Lawsuits Against Hudbay Minerals Will Continue Despite Sale of Fenix Project

Angelica Choc stands next to a sign that says “Adolfo Ich murdered by CGN. Mining is responsible.” Photograph by Daniel Sosa via chocversushudbay.com
Support our journalism. Become a Patron!

Two separate lawsuits against the Canadian mining company HudBay Minerals, regarding the murder of Adolfo Ich and the rape of 11 Mayan-Qeqchi women by mine security personnel, will continue despite the company’s sale of its Fenix mining project.

On August 5, 2011, HudBay Minerals announced that it had agreed to sell the mining project to the Solway Group, a private Russian company based in Cyprus.

“We believe this sale was prompted in part by the severe human rights issues at HudBay’s Fenix Project that dogged the company at every turn. The killing of Adolfo Ich and the gang-rapes of Rosa Elbira and 10 others at Lote Ocho are albatrosses that weigh heavily on the neck of HudBay,” said Murray Klippenstein, lawyer for the widow of Adolfo Ich and the 11 survivors of rape from Lote Ocho.

HudBay sold the nickel mine to Solway for a reported $170 million, less than half of the $460 million that HudBay paid for the mine just three years ago.

Despite the sale, both lawsuits against HudBay Minerals and its subsidiary HMI Nickel will continue. “HudBay and HMI Nickel cannot avoid liability for their past actions by selling the project,” said Mr. Klippenstein. “Our clients will continue to vigorously pursue their claims against HudBay and HMI in Ontario courts to ensure these Canadian companies are held accountable for their past wrongful acts.”

At the request of HMI Nickel (which is now owned by HudBay Minerals), in January 2007, hundreds of police, military and private security forces evicted Mayan Q’eqchi’ families from their lands in El Estor, Izabal, Guatemala. Hundreds of homes were burned down during the eviction.

As if it wasn’t enough to displace the Mayan Q’eqchi’ families, on January 17, 2007, 11 women from the remote community of Lote Ocho were also gang raped by the police, military and security personnel.

In this video, Rosa Elbira shares the story of the 11 survivors. Rosa was chosen to speak on their behalf.

In their lawsuit against Hudbay, the women are seeking $1 million each in compensation for their pain and suffering, and another $4 million in punitive damages because of the “extreme and heinous nature of the attacks against them”.

The second lawsuit against Hudbay is being led by Angelica Choc, the widow of Adolfo Ich Chaman. A respected Mayan Q’eqchi’ community leader, a school teacher and father, Adolfo was brutally murdered by the company’s private security forces.

At the time, there was a great deal of fear that another round of evictions were going to be carried out by the company. This led to a series of community protests.

Then, on September 27, 2009, Adolfo Ich and his wife heard gunshots being fired from the direction of the company’s mine buildings. “Adolfo went to find out what was going on, to warn people to stay back and to see if he could help restore calm. He was not carrying any weapons,” notes chocversushudbay.com, a website devoted to both ongoing lawsuits.

“When Adolfo Ich arrived, private security forces of the mine recognized him as a prominent community leader and appeared to invite him to speak with them about the community protests. As Adolfo Ich approached, approximately a dozen armed security forces surrounded him, beat him and hacked at him with a machete, before shooting Adolfo in the head at close range. Adolfo Ich died of his wounds shortly after.”

While not included in the lawsuit, one day after Adolfo Ich’s death, “men armed with machine guns opened fire on a mini-bus carrying Indigenous educators and leaders from the El Estor region to Cobán. One man, Martin Choc, was killed, and at least nine more wounded,” reported the Dominion. Martin Choc was the auxiliary mayor of the “Lote 8” community.

HudBay released a statement that same day, alleging that the Mayans went on a rampage, attacking government vehicles, stealing automatic weapons from a police station, destroying a hospital built by US NGOs, and wounding several employees. The company also claimed that the Mayans opened fire on each other.

Hudbay was one of the companies named in the International Labor Organization’s (ILO) formal request for the immediate suspension of mining activities in Guatemala. The request was presented to Secretary General of Guatemala on March 2, 2010. As yet, the government has failed to carry out the request.

For more information on the lawsuits, visit: www.chocversushudbay.com

To help fund legal work and for general inquiries, contact: