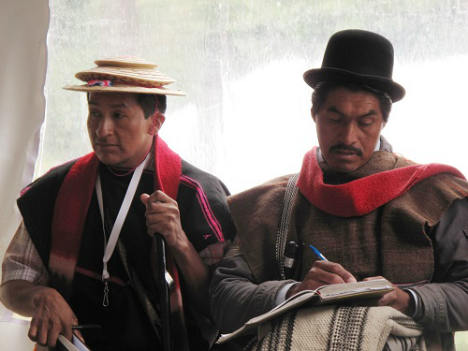 In the chilly town of Santa Maria Tlahuitoltepec, perched in the Sierra Norte of Oaxaca, Mexico the Second Continental Summit of Indigenous Communication was held from October 7-13, 2013.

“This summit is very important because it allows us to strengthen our network of mutual support so that we can leverage greater international pressure,” says Liliana Pachana Moila of the Misak people of Colombia, who is working on creating educational content for radios. In fact, in the plenary an agreement was made to build an Indigenous Multimedia Communication Platform for Abya Yala[1], as a tool for the articulation and socialization of political and communication processes of indigenous peoples, as well as their own Itinerant School of Communication.

Primarily indigenous media makers from various countries in Latin America attended the summit to share their ideas and experiences. There were those that are even particularly successful, such as Nicaragua’s Canal 22, which has the highest ratings in the areas where it operates, and the Ecuadorian Micc Tv that was born from the social mobilization of the Indigenous and Campesino Movement of Cotopaxi (Micc). The Ecuadorian indigenous channel managed to change the commercial media agenda as well as those of the state. “At first we were discriminated against as ‘the channel of the Indians’, then they began to worry because we have a quality product with a good signal and good reception from the people,” says Jose Venegas, broadcaster and member of the Indigenous and Campesino Movement of Cotopaxi. “They thought that since we are an indigenous channel we were going to have indigenous on all day, however we have a newscast in Quitchwa and one in Spanish, music and cultural programs, documentaries and reports that the other channels don’t offer, as well as Latin American, European and U.S. alternative cinema to make people think differently. We are also linked to the mestizo population and believe that we don’t have to remain small just because we are an indigenous channel.”

Indigenous peoples media, according to participants at the summit, must use indigenous languages that reflect their worldviews, strengthen organizational processes, show the cohesion and identity of the people, promote buen vivir and project a “good image” of native peoples, who the other media presents as simply folkloric, as terrorists or drunkards. They also have to work for the elimination of colonialism, racism and patriarchy. In fact, the community media environment itself can become a form of training and empowerment for women. 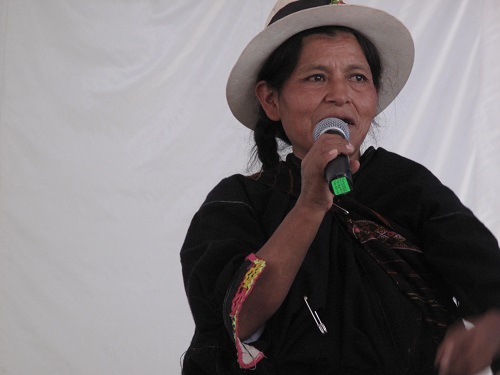 Indigenous media makers must not only learn the use of communication tools, but also be able to be trained as leaders so as to denounce the abuses endured by their people as well as government plans that affect their territories. However, because of this, to be an indigenous media maker, especially in countries like Mexico, Colombia and Honduras, can be very dangerous. “In Honduras the Lenca and Garifuna peoples work very hard for their community radios and have faced strong repression by the government. It [the government] is afraid because the radios broadcast real information about what is happening in the country,” says Wilma Calderon from the Masta organization of the Misquito people.

However, neither the Garifuna or Lenca peoples were present at the Second Continental Summit of Indigenous Communication. They, like many other people, groups and organizations decided to boycott the gathering. The reason is well summarized by Tonatiuh Diaz of Ojo de Agua Communications in Oaxaca, who attended the event: “I don’t think a continental summit like this can be organized with only our resources, it depends where the funding comes from. The money that financed the summit is from the Secretary of Communications and Transport, which is the same [institution] that is persecuting the [community] radios and the investment made is very high considering the needs of the communities. Also we saw the invitation made by president Enrique Peña Nieto as ridiculous”.

“I respect the opinion of those who chose not to participate but I argue that we can sit and talk with Peña Nieto, facing each other with dignity, demanding things without asking for them,” replies Mexican Jose Luis Matías Alonso, documentary filmmaker, member of the Nahua people and active participant in the organizing committee [of the summit]. “It is also true that we have received funding from the Secretary of Communications and Transport, but they have not sent any script and will not effect the autonomy in making decisions of this summit.” 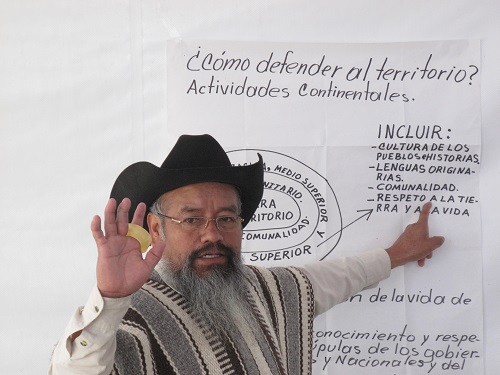 It seems that for the participating organizations as well as those that were absent, the question of autonomy in relation to the government is one that is of central importance. However there are very different positions in defining the conditions in which autonomy can be exercised. Some think that it is important to demand funding from the government without it affecting the autonomy of the medium. Others believe that public funding should be accepted under certain conditions but not from government bodies. While others think that to preserve autonomy, no form of government funding can be accepted.

Another controversial issue has to do with the recognition that the government grants to indigenous media: some want the “legalization” to operate, while others are proud to have no official recognition. In any case, the situation is very different from country to country. For example in Bolivia [indigenous] communities operate 17 percent of the radio airwaves, while in Mexico, according to research by Francisco Vidal Bonifaz, only 15 community radio stations have an official permit.

The attitude toward the government remains as an issue that opposes movements, and that is where the State is able to enter to divide them.

[1] Abya Yala is an indigenous term used to refer to the American continent.

This Article originally was published at Upside Down World.