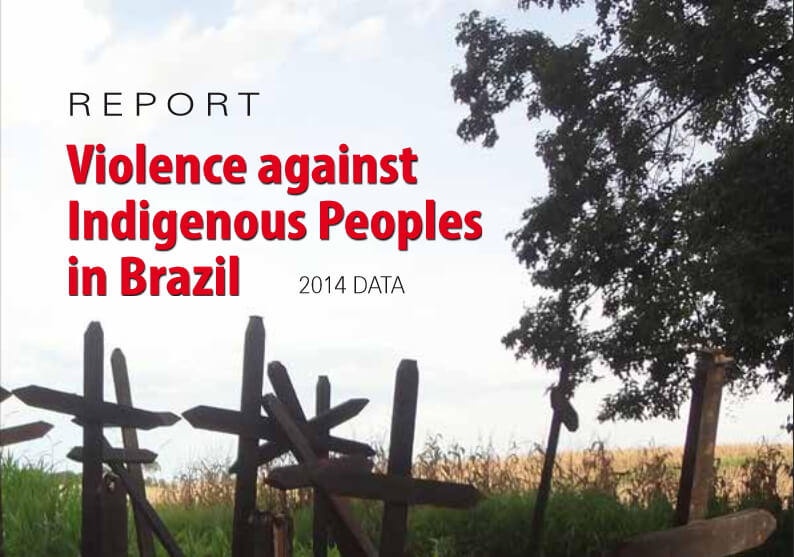 On Oct. 21, at 2:30 (Brasilia time), in the conference room of the Center for International Environmental Law, at the headquarters of Amazon Watch, in the US capital of Washington DC, the English edition was announced of the Report on Violence Against Indigenous Peoples in Brazil – 2014 data, published by the Indigenous Missionary Council (CIMI). The objective of this event is to report the grave increase in violence and violations of indigenous rights throughout Brazil and, especially, the situation of extreme barbarity and the humanitarian crisis being faced by the Guarani-Kaiowá people in Mato Grosso do Sul. In addition to the presence of Eliseu Lopes, leader of the Guarani-Kaiowá people, Lindomar Ferreira, leader of the Terena people, and Cleber Buzatto, Executive Secretary of CIMI, also present are Indigenous Ecuadorians, who will provide testimony on the situation in Ecuador.

In 2014 alone the Report documents 138 murders and 135 cases of suicides, 41 of these murders and 48 of the suicides occurred in Mato Grosso do Sul. The data also reveal a sharp increase in deaths from lack of health assistance, infant mortality, possessory invasions and illegal exploitation of natural resources and neglect and unreasonable delays in the ratification (regularização) of indigenous lands.

In September, during the session of the United Nations Human Rights Council, in Switzerland, Eliseu said that his people are tired of waiting and that they can no longer sustain faith in the will of the Brazilian State to effectively and definitively resolve the cruel situation they face.

According to him, it is important to show the world the reality of how indigenous people are treated in Brazil. “My people are dying, are subjected, every day, to attacks and massacres … but the Brazilian government presents no solution. It is because the demarcation of our lands has been paralyzed that the violence, rape and torture done by thugs and gunmen of the region increase. The government defends the interests of big business and fazenda owners (large-scale farmers) of sugarcane, eucalyptus, soy, corn and cattle. They have high profits, while we are dying,” he stated.

Only yesterday, Oct. 20, the Shock Battalion of Military Police arrived in the municipality of Antônio João, in Mato Grosso do Sul on the border with Paraguay, with the objective of carrying out the dispossession of tekoha (place where it is) Ñanderu Marangatu. The dispossession was ordered by the president of the Federal Regional Court of the 3rd Region (TRF-3), Appeals Court Judge Fabio Prieto de Souza, who denied the motion filed by the National Indian Foundation (FUNAI). The conflict between the military and the Guarani-Kaiowá people was imminent. Last night, the Federal Supreme Court (STF) canceled the repossession (for agribusinesses on the Kaiowa Guarani land) according to the Suspension of Injunction no. 926. However, the community of tekoha Guaiviry is still threatened by an eviction order can be put into effect at any time.

Yesterday afternoon (10/20), Eliseu Lopes, Lindomar Terena and Cleber Buzatto participated in a hearing of the Inter-American Human Rights Commission (IACHR), of the OAS, Organization of American States, on the increase in violence and severe violations of rights of the indigenous peoples. Among other denunciations, were those made regarding the demarcation of indigenous lands and the formation of armed militias, organized by farmers, to attack communities, throughout the country.

On this occasion, they took the opportunity to announce the campaign to boycott the import of agricultural products from the state of Mato Grosso do Sul that are produced on the traditional indigenous lands.

With a population of 45 thousand persons, the Guarani-Kaiowá are the second largest indigenous population in Brazil and occupy only 30 thousand hectares of their traditional lands. According to federal government data, if all the areas claimed by them as indigenous territories were demarcated they would represent only about 2% of the total area of ​​the state. On the other hand, Mato Grosso do Sul has 23 million head of cattle, which occupy 23 million hectares of land.

Download in English: Report on Violence Against Indigenous Peoples of Brazil 2014 Data

Read the Press Release in Portuguese