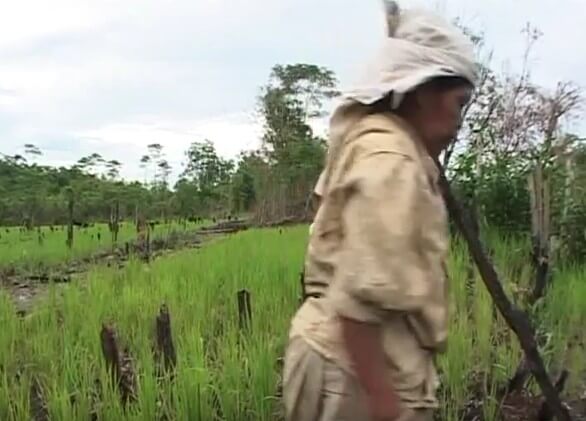 Last Stand for the Alangans

The Alangan forest people on the Philippine island of Mindoro are frightened. The sound of test drilling can be heard several places in the jungle they are dependent on. The land they have inherited from their ancestors is threatened by Norwegian mining operations. They fear that the forest god Kapwambulod will be disturbed and turn against them.

The Alangan People used to live a simple, peaceful life, with other Mangyan tribes along the coast of the Mindoro. That all changed when the Spanish conquistadors arrived with their twisted vision of the world.

“The Spaniards attacked villages, ravaged settlements, forced the… population into Christianity, and robbed them. Three hundred years of suppression and forced labour followed. To struggle against the militarily superior conquistadors was useless for the peace-loving Mangyans.” And so they fled to the mountains, abandoning their traditional life.

Then, in 1896, with military support from the U.S., the Filipinos revolted against the Spanish colonists, and declared themselves an independent republic. However, soon after this the U.S. was granted rights to the Philippines through treaty.

Today the Alangan still live closely with the land, but now as Forest People. It is a life that they are proud to have—-and it is one that they may once again be forced to abandon.

There will be nothing left for the Alangan this time. The mining company Crew Minerals has arrived to ransack the forest of its nickel.

If the company gets its way, in 2011 they’ll will start removing topsoil over a 100 sq. km region of forest, and then take an additional 10m stretch of nickel-containing sediments for processing. If this happens, the land and resources that the Alangans depend upon today will be simply “gone.”

The Alangan say they are not prepared to walk away this time. They want to keep this life.

Excerpts and photo from The Alangans: Forest Tribe on the Verge of Mining by Knut-Erik Helle.