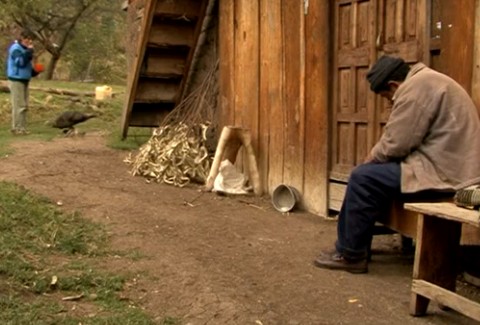 Laguna Negra reveals a tough community desperately struggling to preserve their way of life in the face of powerful forces that wish to exploit the resources they live on. It is a film that explores the core values of a campesino community, the way the fabric of this society has been threatened by large scale mining and the destructive outcome of imposing a capital intensive model of development on a society based on traditional values.

“In 2003 a UK based mining company, Monterrico Metals, began work on an open-cast copper and molybdenum mine near Huancabamba in Northern Peru.

The Majaz mine has divided the local community with promises of money luring a minority to support the project and a majority to fear for the destruction of their way of life.

Conflict and instability grew in the following years culminating in 2005 with a protest march of thousands of farmers to the mine site itself.

During the march many protesters were hurt and thirty were kidnapped for several days by police and security guards.

This film explores that time through the journeys of Servando and Cleofe, two farmers from the region, portraying the conflict through the experiences of the rural farming population which is overwhelmingly against the project. ”

Laguna Negra was filmed, edited, and directed by Michael Watts.