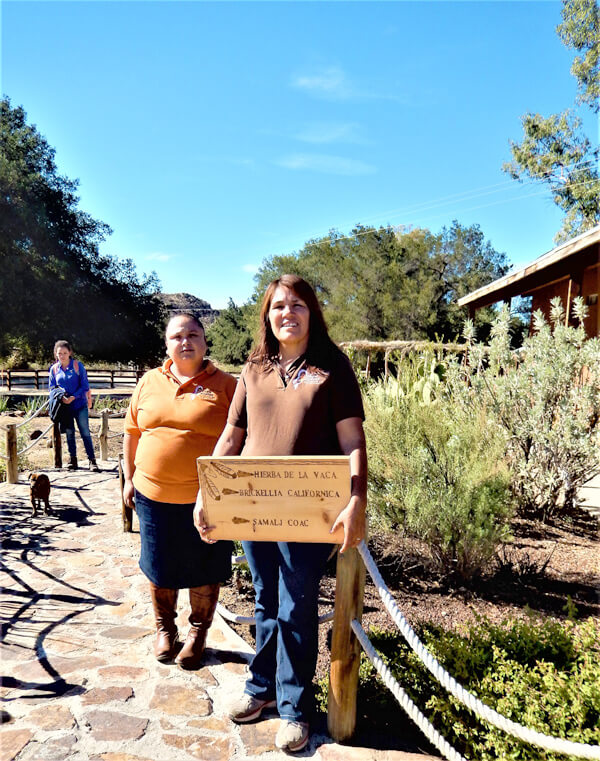 A guided tour of the living medicine chest yields traditional knowledge of native remedies and edibles. Photo by Talli Nauman
Support our journalism. Become a Patron!

On the internationally advertised wine-country tour of Baja California, a well-known destination among dozens is the L.A. Cetto vineyards, a large-scale producer of table wines. Next-door is the rustic and charming family-run Casa de Doña Lupe winery, with quite a local following.

Yet not all is about the culture of wine-tasting during a visit to the Guadalupe Valley. On the same road is a gateway to an entirely different culture, ensconced here centuries before Europeans and Russians arrived to develop Mexico’s first winemaking: the Siñaw Kuatay Eco-Tourism Center at the indigenous Kumiai village of San Antonio Necua. 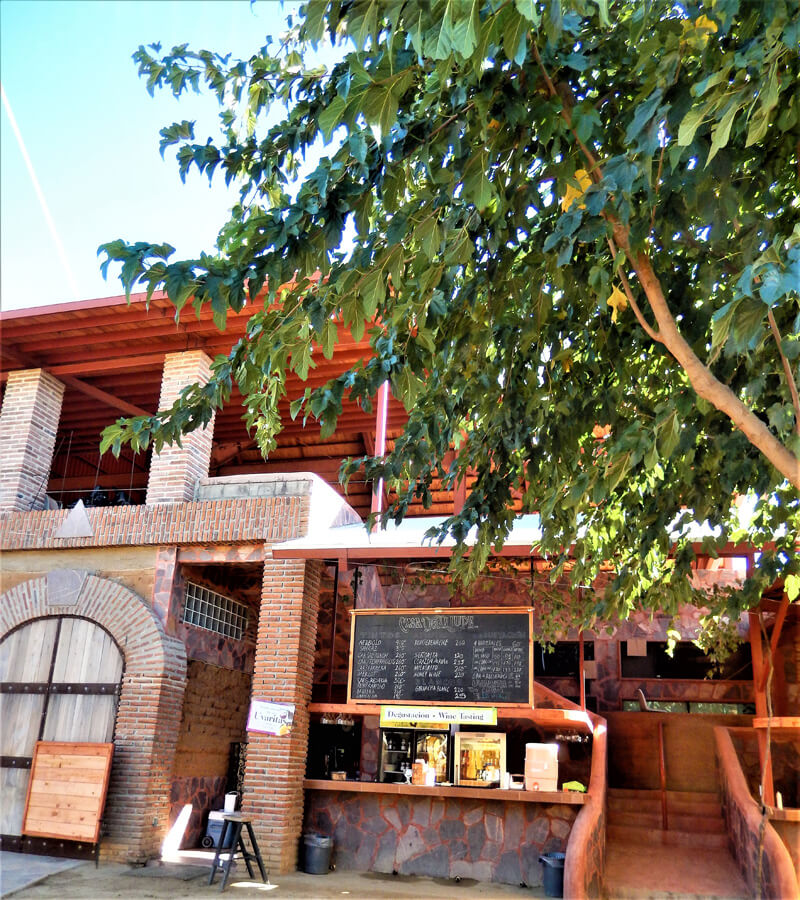 The rustic and charming Casa de Doña Lupe winery has quite a local following. Photo by Talli Nauman

Thanks to this project, a whole new generation of Kumiai is learning nearly lost traditions, central to which are the indigenous language and the knowledge it unlocks for protection of the native habitat necessary for subsistence.

Nurtured by the women’s cooperative here since 2003, the project has received ample participation from the government, academia and non-governmental consultants. It won the National Merit Award for Forestry in 2009 and went on to serve as a sustainable development model for the other three Kumiai communities located in Baja California.

The National Forestry Commission has taken a special interest in the project because of its role in pointing the way for climate change mitigation, adaptation and resilience.

Living close to the land and depending on the weather for wildcrafting and raising livestock, the Kumiai are among the first to feel the destructive impacts of the global warming caused by mounting greenhouse-gas emissions. 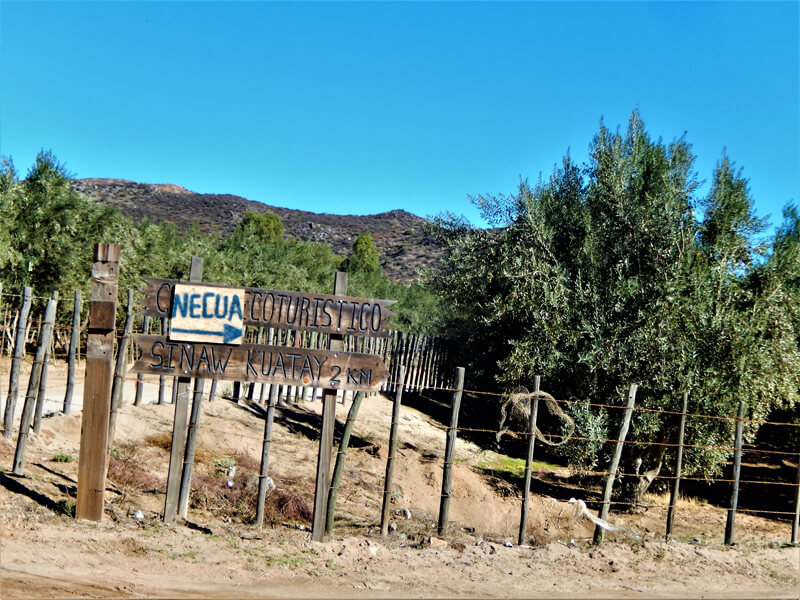 The Siñaw Kuatay Eco-Tourism Center at the Kumiai village of San Antonio Necua is a gateway to an entirely different culture. Photo by Talli Nauman

“With extreme cold and extreme heat, trees are damaged by pests. Animals die from the cold. The citrus fruit have frozen. When it is autumn, it feels like we are in the middle of the summer. These are changes to be reckoned with,” says project participant Leticia Arce.

Siñaw Kuatay means Big Acorn. The project logo is a drawing of an acorn. It is a staple food and a symbol of regeneration.

At the center of the village stands a giant oak with wide-reaching branches, a venerable member of the species that produces the nutty seed. The tree is the gathering point for annual ceremonies that draw visitors from both Mexico and the United States.

The festivities feature singing and dancing with gourd rattles to honor nature, as well as a hockey-like game called piak, and, of course, feasting and a crafts fair complete with jewelry carved from acorns.

According to community member Rosa Morales Domínguez, the grandfather tree that hosts all this has “its roots so deep that they survive the statewide drought,” and, she adds:

The oak is part of the culture. That is why it is a protected species. It provides food, shade and strength. We do not allow any damage. We try to protect it.

Although, San Antonio Necua offers scant diversity in tree species, the community never cuts down an oak tree for firewood, settling instead for fuel from a scraggly bush. “Only manzanita wood is used,” says Morales.

A guided tour of the living medicine chest yields traditional knowledge of native remedies and edibles. Photo by Talli Nauman

The Kumiai can trace their origins in this area back 12,000 years. Every winter solstice, their culture recognizes the sun’s share of the day beginning to grow and the return of its lifegiving energy to the wild foods and domestic crops that provide sustenance.

With only about 250 community members at San Antonio Necua and just 6,000 Kumiai between the entirety of the four Kumiai settlements in Baja California and the 13 in San Diego County, California, the Mexican government considers the tribe among the most in danger of extinction.

The promoters of Siñaw Kuatay are having none of that.

Only four Kumiai speakers remain in San Antonio Necua, the largest of the tribe’s communities in this state. But language courses are offered Monday through Friday.

Some 200 years ago, the people stopped making pottery for cooking and storage vessels, but now they are reviving the craft for retail. Basketry has continued through the ages, now producing some of the most coveted works in the genre.

Foodways are being maintained. Acorns are ground by hand; their meal is sifted, washed, rinsed, drained, dried and then made into a nutritious porridge called atole. Jojoba produces another nut, eaten here like almonds. People also harvest pine nuts, yucca and wild honey. Palm seeds and squash are on the menu. 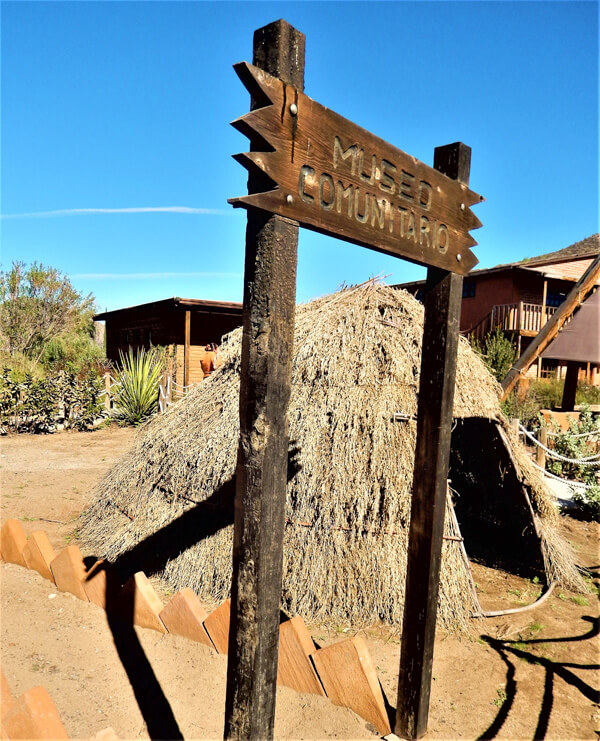 A museum, a gift shop, language, craft and cooking classes attract about 400 students and tourists a month, making the project a model for other indigenous communities. Photo by Talli Nauman

Plant and animal husbandry came with the missionaries, adding to the products of hunting and gathering in community life. “Ranching is very important,” says Arce. Cattle and goat herds produce raw material for local cheesemaking.

A cookbook of traditional recipes is being compiled. A botanical garden, replete with medicinal plants, is the crowning glory of the Siñaw Kuatay complex.

“We reforest with local plants, which are used as medicine and food, to teach respect for them,” explains Arce.

Guiding a tour of the living medicine chest, she points out natural remedies and edibles, such as mint, black tea, rue, root beer plant, islaya cactus (for headache), valerian and chakpil (an aromatic).

Around 400 visitors come every month. Because of the center’s success, the project is being replicated in the indigenous Pai Pai Mission of Santa Catarina and the Kumiai village of La Huerta. Click here for more information.

Talli Nauman is Co-Director of Journalism to Raise Environmental Awareness

This article originally appeared in Meloncoyote. It has been re-published on IC with permission.