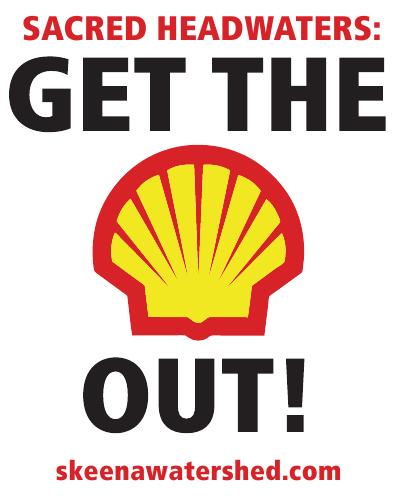 Last Monday, the Klabona Keepers won a temporary injunction against Shell Canada, forcing them to halt road construction for the coalbed methane project their pushing on Klabona Territory (Tahltan).

The injunction will only be in effect for about a week, when a Canadian court will can hear the application for a second injunction against Shell; but Rhoda Quock, a Tahltan elder and spokeswoman for the Klabona Keepers says “we are treating this injunction as a significant victory and the best way we can celebrate the 10th Anniversary of the Landmark Delgamuukw/Gisday’wa Decision that was handed down on December 10, 1997.”

Since 2005, the road has been the site of roadblocks by the Klabona Keepers Elders Society. Aside from it being on Tahltan lands, the area that Shell threatens to destroy has been used for generations by the Tahltan. It’s where the take their youth to teach them about their culture; and there are several sites that have been traditionally used for hunting, fishing, trapping and trade. They also say there are many trees in the area that are used for cultural purposes.

The interim injunction was issued on the basis that Shell may be infringing on the Tahltan’s cultural rights, as outlined in Canada’s Heritage Conservation Act.

“Shell is trying to be respectful and careful not to harm anything that might be archeologically significant,” spokesman Larry Lalonde said.

“We have undertaken two independent archeological assessments at the site.”

Lalonde said the items in questions, including the culturally modified trees, were found to be no older than 1846 and therefore not protected by the Heritage Conservation Act…”

Regardless, the land is unquestionably within the traditional territory of the Klabona people. “It is also where the Nass, Stikine and Skeena rivers are born, inspiring the nickname the Sacred Headwaters.

Peter Jakesta, a member of the Klabona Keepers, said his people are determined to avoid the kind of destruction that accompanied railway construction in the 1970s.

“What our elders and many of our people are saying is what we have left there we hold in high significance,” he said. “And we don’t feel that Shell is respecting our wishes.”

The interim injunction will be in effect until the hearing of a full application for an interlocutory injunction, probably some time next week. If it’s put into effect, than this second injunction would run until the final resolution of the lawsuit between Klabona representatives, Shell and the Province of British Columbia.