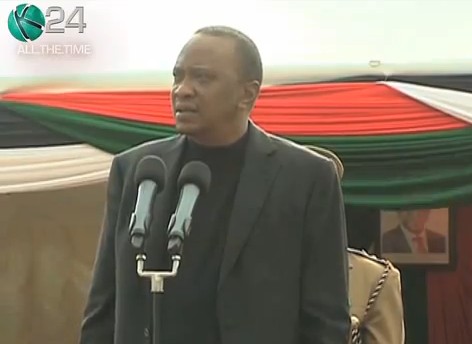 The visit to Narasha is the result of a Maasai declaration demanding not only compensation for the loss of life and property but the arrest of all government officials who took part in the dawn raid on July 26th, 2013 that left 250 houses burnt, over 2000 families homeless, 600 children not attending school and several still missing.

The aftermath of the destruction raised tension between the Maasai and the Kikuyu with most Maasai members of parliament elected through the ruling Jubilee Alliance threatening to defect from the party. Maasai anger was witnessed on Sunday, July 28th, when government officials were forcefully ejected from a prayer meeting by the Maasai who used all manner of weapons to smash government cars as the officials fled for dear life from the meeting.

The Maasai move and their declaration regarding the raids prompted the Maasai to unilaterally declare that:

The Maasai gave an ultimatum to the government that, if their demands are not met, the country should brace for an all-out exodus of Kikuyus from any part of Maasailand in Kenya. This and the proposed visit by Kenya’s former Prime Minister Raila Odinga to Narasha is believed to be what prompted the President and Vice President to intervene by appointing a committee consisting of 8 elders form the warring communities, 2 members of parliament and the cabinet secretary in charge of internal security (who happens to be a Maasai) to look into the issue.

Narasha, Laikipia, Kitengela, Mau, Olchurai, Oloirien, Kidong, Namuncha Oloirien (in Masimba) are just a few of the hot spots where land disputes exist between the Maasai and other communities in Kenya–areas that are home to the Maasai who suffered massive land dispossession dating back to the 1900s, when the former colonial government forced the Maasai off 75 per cent of their ancestral land.

It is hoped that the truce will hold; however, given the historical magnitude and nature of the problem of land ownership in Kenya, the president’s piece meal approach may not provide a lasting solution. The Maasai claim ancestral ownership of most of the disputed land; on the other hand, Kikuyus from central province hold title deeds for the same land, despite not even living there. This for President Kenyatta is a nightmare, especially if the Maasai hold true their threats of ejecting Kikuyus who have used a tyranny of numbers, government support and economic power to buy vast areas of the Maasai’s ancestral lands. The resettlement of the Kikuyus was carried out by Uhuru’s father, the first president of Kenya. There is also a suspicion, from the president’s own words, that there is “political incitement”. This points to the unease the president has on solving the land questions; it seems he would rather blame any acts by the Maasai to protect their ancestral land on the opposition. There is another suspicion: no one has been arrested, despite the knowledge by the government of the perpetrators of the recent attack. Nevertheless, the Maasai in Narasha are happy that the president announced during the meeting that they will be compensated; however, many also fear it is a ploy to arm-twist them in the name of a constitutional provision that would allow the government to acquire community land.

The Maasai of Narasha have vowed not to move an inch and that they are ready to be buried next to their great grandfathers graves. They are not leaving their traditional shrines or their dry season grazing areas and salt links that support their livestock. A quote from one elder sums it up:

“even the smallest, weakest and perceived stupid animal has a limit, we were moved from Laikipia, Nakuru, Mau, and now at this age and time when our sons and daughters can read and speak the language that the white man and Kenyatta used to dispossess us, the son of Kenyatta need to be told loud and clear, we the Maasai have had enough from the Kikuyu”.

The Maasai are now contemplating legal action to support the cause.