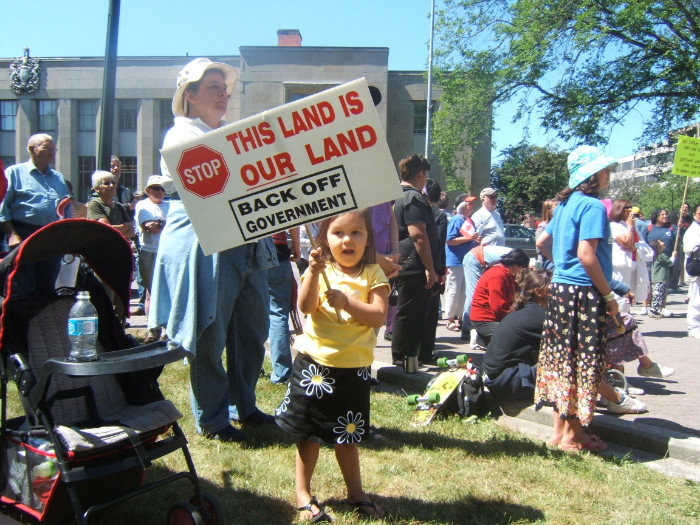 June 24: Tell the world the truth about Canada’s record on Indigenous rights

The Indigenous Network Defenders of the Land has put out the call for a cross-Canada Day of Action to lead in to the upcoming G8/G20 meeting in Toronto, ON.

The welcomed mass protest will be aimed at telling the truth about Canada’s broken record on Indigenous rights and demanding that Canada abolish its abhorrent, racist, and genocidal policies toward all Indigenous People.

Call from Defenders of the Land for a day of action on Indigenous rights, June 24, 2010

When the G8/G20 comes to Canada in June let’s tell the world the real story about Canada’s record on Indigenous rights: a continued policy that aims to terminate Indian Peoples by removing our land and resource base and denying us the right to self-determination, under the power of the Indian Act and the Department of Indian Affairs. Canada is the only country still opposing the UN Declaration on the Rights of Indigenous Peoples; the other three countries opposed to it have changed their vote or are reconsidering. Canada continues to criminalize Indigenous activists who stand up for Aboriginal and treaty rights – even though these rights have been affirmed by the Canadian constitution and the United Nations Declaration on the Rights of Indigenous Peoples. Canada’s policies of dispossession and control continue to create extreme poverty and social distress for Indigenous Nations across Canada. Finally, Canada and the provinces have done nothing to investigate and stop the disappearance and murder of hundreds of Aboriginal women across the country. That is the record on Indigenous rights that lies behind the show of Aboriginal culture that Canada put on at the Olympics, and it is time the whole world came to know it.

We reject the G8 and G20 as decision-making bodies. They don’t operate on behalf on Indigenous peoples and don’t recognize or respect Aboriginal and treaty rights. The G8 and G20 are implicated in the ongoing colonization and destruction of Indigenous Peoples and their lands. This ongoing colonization in Canada and abroad is based on the racist doctrines of Discovery and terra nullius.

Defenders of the Land, a network of Indigenous Nations in land struggle, is calling for June 24, 2010, to be a cross-Canada day of non-violent action focusing on Indigenous rights.

Call to Indigenous nations and communities

To Indigenous nations and communities across Canada, including grassroots people, traditional leadership, elected leadership, elders, youth, women, and men: we call on you to engage in non-violent action in or near your communities on June 24, on issues and messages that are relevant to you and chosen by you. Actions could include blockades, occupations, rallies, or economic disruptions, in addition to spiritual ceremonies and community gatherings, all of which maximize respect for life and our rights as Indigenous Peoples. Non-violence is a guide for our hearts and our minds as we decide on appropriate actions to defend and protect our land, our communities, and our ways of life; it is not intended to do the work of the government by dividing us from one another or labelling each other.Communities should plan and engage in their own actions, and do what is comfortable and appropriate for themselves. Defenders of the Land can offer advice, assist with some coordination and communications, including media work, and may be able to provide some training assistance, depending on capacity. Defenders of the Land does not have capacity to offer legal support, so communities should choose their actions with this clear knowledge and be prepared to take responsibility for follow-up. Defenders of the Land may be able to connect people with offers of legal support, but this depends on availability and cannot be guaranteed.

Defenders of the Land main action

Defenders of the Land will also be hosting its own mass action in Toronto on June 24, to be planned in cooperation with other Indigenous and supporter groups. This action will focus on the following demands:

1. Canada must adopt and fully implement the UN Declaration on the Rights of Indigenous Peoples.

2. Jointly with Indigenous communities, Canada must change its Comprehensive Land Claims policy to recognize and respect Aboriginal title and Aboriginal and treaty rights; end the policy of extinguishment; and repudiate the racist doctrines of Discovery and terra nullius.

3. Canada must stop criminalizing Indigenous Peoples for defending their rights.

4. Canada and the provinces must take coordinated action to investigate and end the ongoing murders and disappearances of Aboriginal women.

5. Canada must comply with our right to say no to all activities on Indigenous territories that commodify the sacred: air, land, water, animals, plant and genetic materials, and our traditional ecological knowledge. Indigenous Peoples must be informed of such activities, and their right to say ‘no’ respected, through a meaningful process according with their customs and respecting Aboriginal and treaty rights and the standards set out in the UN Declaration on the Rights of Indigenous Peoples.

There will also be a “summit” of Indigenous representatives from around the world before the day of action.

If you are interested in organizing support actions for the Indigenous Day of Action in your area, please contact us by email at defendersoftheland@gmail.com so we can follow, network, and list simultaneous events on that day. We call on supporter groups to take guidance and respectful leadership on messaging and tactics from Defenders of the Land. We also recommend providing material support to, or joining with, nearby First Nations who have responded to the Defenders call.

This June, leaders of the world’s biggest economies (and biggest colonizers, and biggest polluters) will be coming to Canada for the G8 and G20 meetings. The G8 meeting will be held June 25 in Huntsville, Ontario, traditional Anishinaabe territory, while the G20 summit will be held June 26-27 in Toronto, on traditional unceded Mississauga territory.

The G8 brings together Canada, the US, Russia, the United Kingdom, France, Italy, Japan, and Germany. The G20 includes these countries, as well as Brazil, India, Indonesia, Australia, China, Mexico, and South Africa, among others. The G20 meetings also bring in the heads of the World Bank, the International Monetary Fund, and finance ministers for the countries named.

The governments of the G8/G20 have been responsible for the exploitation and devastation of Indigenous Peoples the world over. These meetings are meant to coordinate the continued economic, ecological and cultural domination of poor, powerless and Indigenous communities.

Their focus is on protecting and preserving the power of the elites in these countries, and preserving the economic and political order that has been responsible for the destruction of countless Indigenous cultures and persons. The meetings are closed to public participation, and they attempt to make decisions on behalf of the world.

Two years ago, for the first time, an Indigenous summit was held around the G8, in Hokkaido, Japan, traditional territory of the Ainu people. At that meeting, Indigenous delegates from around the world acknowledged the recently passed UN Declaration on the Rights of Indigenous Peoples, yet stood up to call for Canada, the US, and Russia to respect Indigenous Peoples and the Declaration. Subsequently, the United States has announced it is reconsidering its opposition to the Declaration, leaving Canada the only G20 country, and the only country in the world, explicitly opposed to it (Russia abstained).

They also made demands around Indigenous Peoples’ rights to their lands, climate change, energy projects, rights to food, corporate violations of Indigenous sovereignty, protection of traditional knowledge and cultures, women’s rights, and more. They also made a call for Indigenous leaders in Canada to continue the tradition, and organize a summit at the 2010 G8 summit.

This year, a large number of social movements and advocacy organizations are planning to converge on Toronto around the G8/G20 meetings. This may be the biggest gathering of so-called world leaders in Canada to date, and the world’s attention will be placed on Canada.

Indigenous Peoples have not been invited to the G8/G20 summit tables, but we must make our own voices heard as a power the world cannot ignore.