MNN. August 28, 2007. Judge Gordon Thompson has ordered the Algonquins who are blocking access to a proposed uranium mine north of Sharbot Lake to leave immediately. The people have been told to expect the police on Wednesday, August 29th. All supporters are asked to come to the site to help maintain the peace. This is only the beginning of things to come under the conservative regime with the help of the liberals at Queen’s Park Toronto. The Bush administration in Washington DC needs uranium for their military industrial schemes.

Justice Thomson has ordered the protesters to leave and allow Frontenac Ventures Corporation to start uranium mining, to contaminate the watershed of all of eastern Ontario and western Quebec, one of the most densely populated areas in Canada.

“Frontenac shall have immediate, unfettered and unobstructed access to the subject property including the field office, access road and all of the identified exploration property and the Clarendon site,” Justice Thomson wrote. If the judge wanted to be truthful, he should have added, “and the right for Frontenac to contaminate, destroy the unborn, carry out genetic damage to the flora and fauna of the entire area”.

The interim injunction stands until a full hearing can be heard, which includes a $77-million lawsuit and a full injunction against the Algonquins starting on September 20.

We are very concerned that a judge who is supposed to be impartial would not even consider the rights of the owners of the land. This is a blatant example how our lands are being illegally expropriated. We have been facing these “gold rushes” all over Turtle Island.

The mine gates are at highway 509 just north of Sharbot Lake, off highway 7, west of Perth and 42 miles north of Kingston. 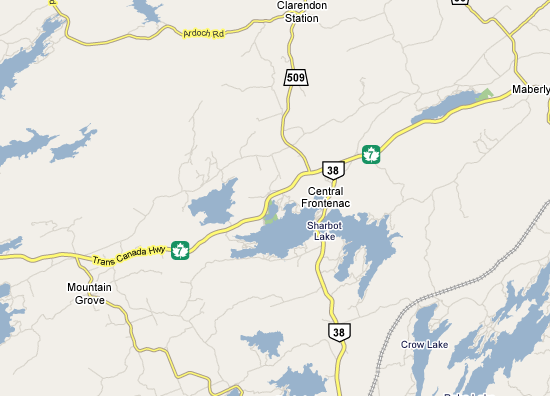 The Algonquins know it’s their land. Chris Reid, the lawyer for the Ardoch Algonquins said his clients are “not going to leave”. Who is oversees Judge Thompson? He doesn’t appear to have read any Supreme Court decisions that provide that Indigenous people must be consulted and give their fully informed decision by a clear majority on a clear question, for any activity by foreigners like Frontenac or any corporate Canadian in any form.

If the Algonquins are attacked, it will be a one-sided battle. The Indigenous People vow to protect our land and jurisdiction. The world will see how vicious and corrupt the corporate regime of Canada is. We have no physical weapons. Our only weapon is the truth and doing what is right.

The Algonquins have already warned the colonial authorities and their agents to stop trespassing on unsurrendered land, breaching the peace and threatening violence. They point out that colonial courts represent only their adversaries and their corporate interests. A neutral third party at the international level is the proper forum. Frontenac Ventures Corporation is trespassing. Their intent is to exploit and kill creation. When the owners of the land say “no”, it’s “no”! There is nothing to negotiate.

A surrender of Indigenous land must be done under their own law, the constitution of Canada (Section 132) and international law. It must be done through negotiation and a vote on a clear question by the majority of the people.
Even Canadian law does now allow this kind of annexation without consultation, consensus and compensation. Algonquin law does not allow the land to be alienated.

The company must allow an archeologist visit the site to “determine aboriginal burial sites” and other items of significance. They are even going after our ancestors to contaminate them! Living people isn’t enough for them. It’s half swamp. They want to create uranium contamination which turns things into a radio active soup.

The judge’ instructs the police to arrest anyone who stands in the way, and Frontenac cannot be stopped in its right to destroy people and the environment.

This is Ottawa’s prototype for the “final solution” of the “Indian problem” elsewhere. When it’s all done, they hope nobody will know about it.

The police, probably with the help of the army, under the guidance of the U.S.Military, may be standing nearby. They will attempt to bull doze everybody, fully clad in riot gear, lethal lasers and guns. Sharpshooters, like psychotic
Kenneth Deane who killed Dudley George at Ipperwash, will be using us as target practice. Remember the protest at Tiananmen Square in China in 1989.

One lone tiny person stood in front of those tanks and stopped the military from killing demonstrators. Nobody wants to see women and children crushed by the might of present day neo-con totalitarianism.

The police have been instructed to “use their discretion”. This is the same disease ridden blanket they used at Ipperwash to cover their butts. Aren’t they supposed to use their discretion at all times? Who gives the final order?

Ontario Provincial Police Commissioner Julian “Little Mouselini” Fantino? How many snipers have been assigned this time? No matter what, they do not have a right to kill us to appease the corporations who run Canada. This is the longtime strategy of a violent and brutal society built upon the memories of the blood that was shed by our ancestors for the last 500 years. All because we are protecting the ecosystem and our lives! Don’t they know that our job is to protect the earth?

The OPP infiltrated into the chieftainship of the Algonquins to show other Indigenous People how far they will go to take away our lands and rights. Algonquin Chief Randy Cota, an OPP officer, will make sure the tanks can come in. He will open the gates for them.

We have a suggestion on how the OPP and all colonial corporate governments and their agencies can relieve themselves of their pent up urges to steal and destroy everything in sight. They can start today and prepare for the global synchronized “Orgasm for Peace” that is taking place on Winter Solstice Day, Saturday, December 22nd, 2007.

This is when everybody comes together to change the energy field of the Earth through their input. It won’t work if you
don’t close your eyes. Make it easy on yourself and don’t resist, guys. [coastalpost.com].

Indigenous People, supporters, do not fall for traps. The OPP will have someone as an “agent provocateur” just like the Surete du Quebec did at Montibello. Watch out for die hard trademarks like shiny ears.

This is part of an attempt at martial law for all of Turtle Island. Let us make sure that the OPP or anyone does not provoke a violent confrontation. They need a reason to impose “a police state”. In our experience with these kinds of sieges, the police will stop communication, food and freedom of movement. The corporate media will mislead the public. The “attack will not be televised”. Only the retaliation that is staged for the public to be turned against us. Cameras and video tapes need to be there with extra batteries and chargers.

Also international observers need to be inside to be the eyes and ears of the world with an outlet for their reports.

Supporters are asked to join us as soon as possible. The Ardoch and Shabot Lake Algonquins will remain peaceful. Police road blocks are usually set up around a perimeter of anywhere from six to 10 miles or closer. Needed are medical supplies, fresh water, food, tents, camping equipment, gas for the generators, vehicles, boats and computers. Media should be inside and outside.

This has been in the works for sometime. There has been much traffic during the night and day which is unusual. On Sunday police were parked up there doing radar which is a first.

Canada and Ontario should keep their invading foreign forces off Algonquin land. It is not a policing issue. It’s an international issue.

The unarmed and peaceful Algonquins and their supporters have been at the barricade two months. They have held strong and continue to do so.