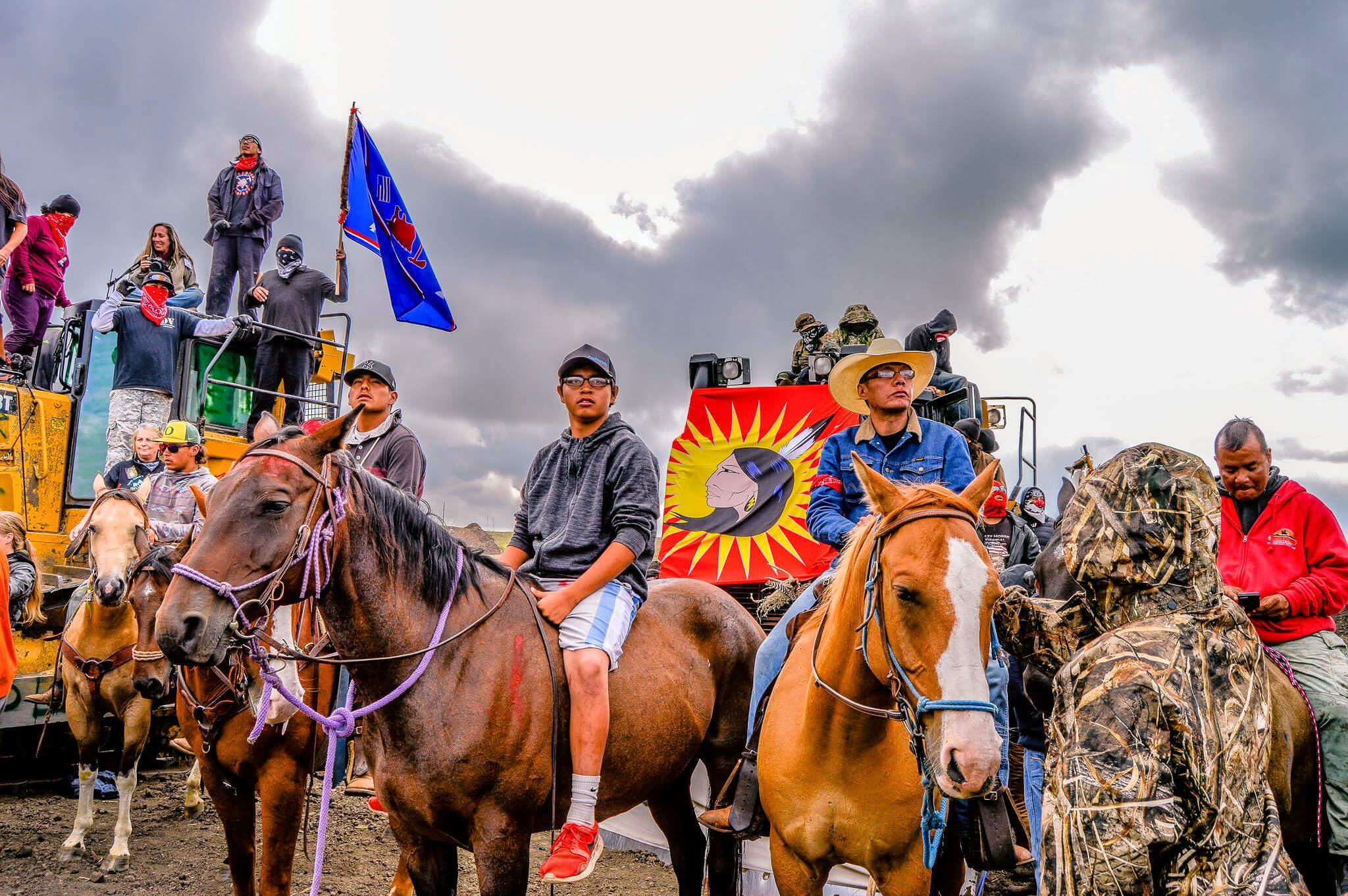 Journalism versus activism in times of resistance

I get approached frequently to discuss my time spent reporting from Standing Rock, the Indigenous-led movement that sought to stop the Dakota Access Pipeline. But what’s funny about these invitations is that they almost always incorporate some notion that I was there as an activist – and without even asking me if that was, indeed, the case.

It’s one of these common assumptions: Native American journalist equals Native American campaigner. To be sure, there are many Indigenous folks I know who call themselves journalists as well as activists in the same breath, and that’s awesome – we need positive and powerful messaging out there. From their headlines, these writers call out today’s problems from tribal community and prompt a call to action. And it works for a lot of different audiences. Indigenous Peoples get a boost, allies get to show their support and outsiders trying to grasp at a world unknown get an introduction to root causes and agendas. Combined, it makes for an easy narrative because of what little critical thinking is required.

But here’s the thing: Indian Country can be a complicated wonder at times, and to routinely simplify the narrative perhaps perpetuates situations like we saw at Standing Rock, where major media presence was uneven at best. It was a stark absence, the lack of journalists on the ground during some of the most critical moments of the movement. It took a harrowing night of police weaponizing water on protesters before major newsrooms ultimately sent crews to the standoff. If it hadn’t been for water protectors themselves live-streaming the episode on Facebook, many would have been led to believe what had been written by the regional Associated Press reporter, who called the sub-freezing night of police-led violence “skirmishes”. But even though citizen journalism corrected where mainstream under-performed, we need to recognize the relationship between the two – and start to scrutinize all newsfeeds that come across our screens.

Since that sub-freezing night of 20 November 2016, we’ve seen an unraveling of documentation proving that the North Dakota police used military-style tactics, guided by a former CIA operative behind the for-hire security firm, TigerSwan. From revelations by DeSmogBlog, The Intercept and other bottom-up revelations, it’s clear that North Dakota police targeted demonstrators, treating them not unlike “jihadists”; they were profiled as “terrorists”, and some were even formally charged with such allegations.

Again, it’s easy to see how a Native American journalist could be seen as an activist with so much stacked up against people demanding clean water.

As I type these words on 4 December 2017, I reflect back to a year ago on this day, when roughly 12,000 people stood in unity on the borderlands of the Standing Rock reservation on the day the Obama Administration called to halt construction of the Dakota Access Pipeline. Those who were there turned out to resist, not just an energy project, but the many other strands of injustices that the months-long demonstration represented: systemic and historic military-led violence, environmental racism, deliberate political marginalization and segregation. The response to these circumstances at Standing Rock was ultimately a resistance to these trends, and also a place for Indigenous Peoples to heal from generations of trauma.

When we call Native American journalists ‘activists’ in the same sentence, without thinking otherwise, it automatically diminishes the Indigenous narrative

At Standing Rock on this day, 4 December 2016, there were also teams of mainstream journalists literally scrambling to get the story that they had missed for months. I know because I spoke to many of them as they frantically searched for travel directions, quotable sources and facts, so many essential facts. Satellite trucks lined up along Highway 1806, overlooking the sprawling resistance camps. From their perches, reporters went live on the air, quoting Lakota prophecy, and explaining the ‘black snake’, the symbolic reference that water protectors, or protesters, had called the pipeline.

As the major media parachuted in, predictably, they hired Indigenous ‘fixers’ to get at the story fast and quick; they featured images of the most colorful ‘Indians’ dressed in regalia and face-paint; and they explained treaties and consultation, the cornerstone of these agreements, as if understanding these concepts for the first time – because they were.

But it was bottom-up journalism that helped shape a story that outsiders finally understood from Standing Rock. It’s why when we call Native American journalists ‘activists’ in the same sentence, without thinking otherwise, it automatically diminishes the Indigenous narrative that is already burdened by a chronic, routine ignoring. It’s an injustice in and of itself and something that I often confronted when reporting from Standing Rock, including my own arrest.

On 1 February 2017, I was arrested while gathering interviews and taking photos of a demonstration near the main Oceti Sakowin camp, where water protectors had been camped out in the North Dakota winter. Despite showing my press pass when asked, and leaving the scene when police requested, I was detained for 30 hours, in which five were spent in a freezing garage where I was verbally accosted by the jail captain. I was denied my right to a phone call for more than a day, and while detained I learned that my white cellmates were spared the humiliation of being strip-searched but that Native American women like myself were not. When I was released from jail, I read that police had lied to the Bismarck Tribune about whether I had presented my press pass to officers at the scene of the demonstration. I did, even though they said I did not. Months later, I still face charges of criminal trespassing and engaging in a riot which could result in fines and up to a year in jail.

Judicial systems in towns like Mandan, North Dakota, work to discredit journalists by arresting them and labeling them ‘activists’

And so it’s important that we acknowledge that they arrested a journalist that day, on 1 Febuary 2017, not an activist. And it’s important that society respects and sees the difference between the two. My statement is not meant to throw a shade on activism. We need more resistance fighters in this world. It’s just not in my DNA to take to the streets, pump fists and chant politicised slogans. What is in my being is to observe carefully and think critically about these current events shaping our lives and to frame ideas backed by facts that can have the farthest reach with the most integrity.

We’re living in a day where judicial systems in towns like Mandan, North Dakota, work to discredit journalists by arresting them and labeling them ‘activists’. These are women like Amy Goodman, an unflappable field reporter and media businesswoman whose work has been recognised around the world. And so to enable this way of thinking isn’t just a disservice to the people who are teetering the fine line between credible narratives and nuance, but it’s a burden to the very democracy that journalism brings and the reason why I believe it is one our noblest professions.

And so as the resistance movement across America spreads, much of it inspired by the people power that came together at Standing Rock, we must also realise that there is a war on journalism happening in America and around the world. Until late November, the mega-chain Wal-Mart was selling a t-shirt that used off-colored humour suggesting hanging journalists. Store executives only agreed to pull the item from its racks following intense scrutiny from the American journalism community. Meantime, according to the U.S. Press Freedom Tracker, there have been reported attacks on at least three dozen journalists in the country alone.

Accountability journalism is becoming one of the most important professions of our time. We must respect this role in this time of resistance, and think twice before using the label ‘activist’.

Jenni Monet is an award-winning journalist and tribal member of the Pueblo of Laguna in New Mexico. She’s also executive producer and host of the podcast Still Here. @jennimonet
This article was originally published at openDemocracy as a part of Right to Protest, a partnership project with human rights organizations CELS and INCLO, with support from the ACLU, examining the power of protest and its fundamental role in democratic society. It has been re-published at IC under a Creative Commons License.