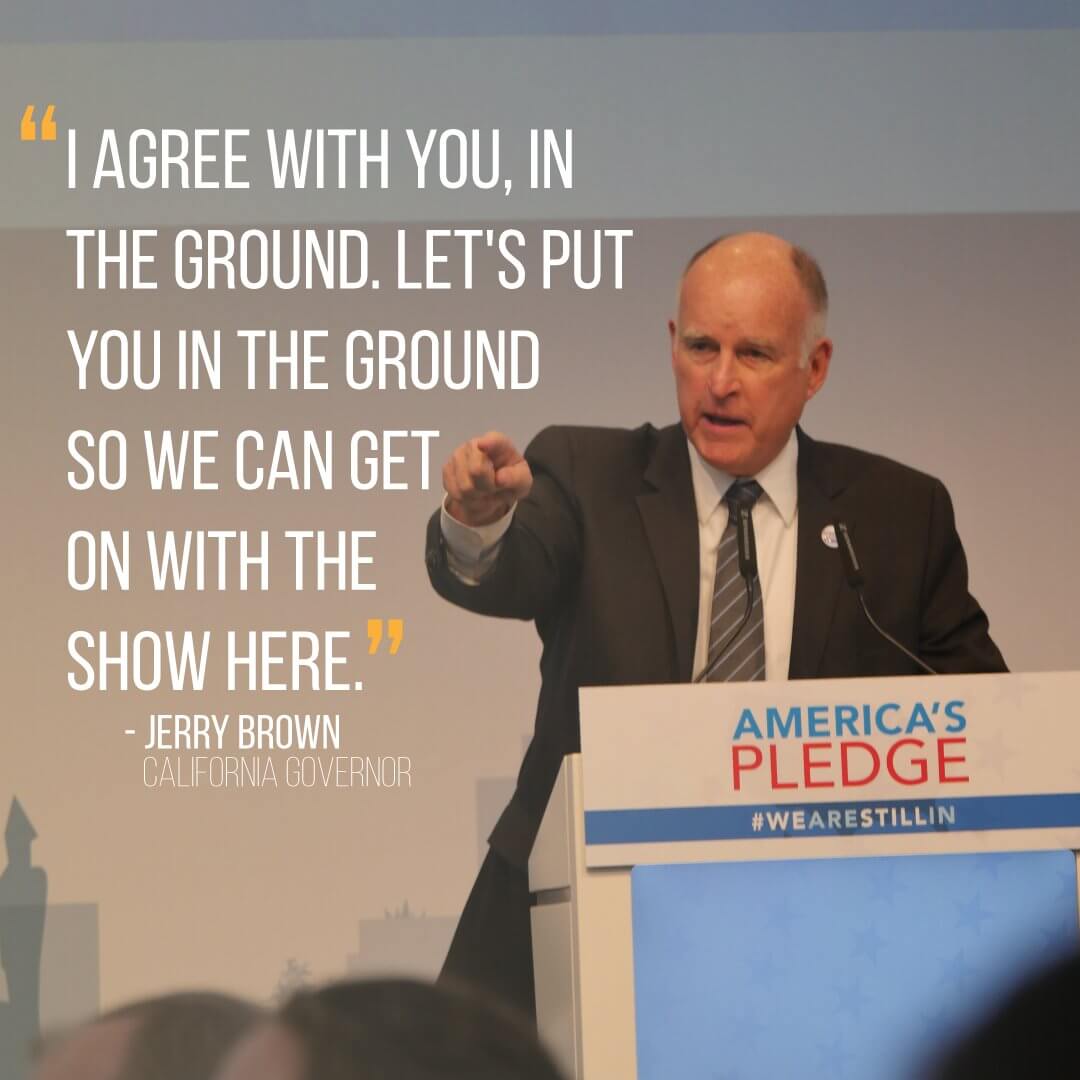 Jerry Brown tells indigenous protesters in Bonn, ‘Let’s put you in the ground’

Governor Jerry Brown doesn’t always deal with critics of his controversial environmental policies well — and that was the case again on Saturday, November 11, when he spoke at the UN Climate Conference in Bonn, Germany.

Californians, including indigenous water protectors and those on the frontlines of climate change, disrupted California Governor Jerry Brown’s speech at the “American’s Pledge” event at the UN climate talks to confront his strong support of fossil fuels in his state.

The banner-carrying protesters yelled, “Keep it in the ground” and other chants, referring to the governor’s strong support of fracking, both offshore and on land in California, and cap-and-trade policies that could prove catastrophic to the Huni Kui People of Acre, Brazil and other indigenous communities around the globe.

“I wish we have could have no pollution, but we have to have our automobiles,” said Brown as the activists began disrupting his talk.

“This is very California. Thanks for bringing the diversity of dissent here,” the visibly disturbed Brown continued.

A video of Brown’s reaction to the protest is available at the Sacremento Bee.

This is not the first time that Brown has employed harsh words to blast his opponents. On July 25 of this year, Brown blasted critics of his oil industry-written cap-and-trade bill, AB 398, for practicing “forms of political terrorism that are conspiring to undermine the American system of governance” in an interview with David Greene of NPR (National Public Radio).

Governor Brown, portrayed as “a green governor,” “climate hero,” and “resistance to Trump” by the mainstream media and corporate “environmental” NGOs, has come to the climate talks to promote California as a global model of “climate leadership” at a time when increasing number of Californians are fed up with his pro-Big Oil and pro-Big Ag environmental policies.

“When cities and states combine together and then join with powerful corporations, that’s how we get stuff done,” said Governor Brown at Saturday’s event at the U.S. Climate Action Pavilion, the exhibition space sponsored by U.S. non-federal leaders at COP23. “We’re here, we’re in and we’re not going away.”

However, Indigenous Peoples, frontline communities, environmentalists and climate activists disagreed strongly with Brown’s contention that cities and states collaborating with “powerful corporations” is “how we get stuff done” – and held this non-violent direct action to expose Brown’s deep ties to Big Oil and ‘false solutions” such as carbon markets.

“From refusing to ban fracking to letting oil companies dump toxic waste into underground water supplies, Governor Brown promotes policies that incentivize oil and gas production in the state,” according to a news release from the Indigenous Environmental Network. “His cap-and-trade extension includes provisions written by oil lobbyists that prevent state and local agencies from directly limiting carbon emissions from oil refineries. He has also failed to shut down the Aliso Canyon natural gas storage facility, where the largest methane leak in U.S. history forced thousands to flee their homes in 2015.”

On November 9, a Center for Biological Diversity report released at the Bonn conference revealed that three-quarters of California’s oil is as “climate-damaging” as Canadian tar sands crude. “Oil Stain: How Dirty Crude Undercuts California’s Climate Progress” found that eight of the state’s 10 largest-producing oil fields produce “very dirty crude with greenhouse gas emissions comparable to tar sands oil,” according to the Center. The report detailed how “the state’s dirty oil problem is compounded by policies that incentivize crude production.”

The groups called on Governor Brown to ban new drilling and fracking, phase out fossil fuel production, and commit to “a just transition to clean energy for all.”

“Northern California has five refineries stretching along our Bay on the North East side of San Francisco,” said Daniel Ilario, Idle No More SF/Bay Area. “Those living along this Refinery Corridor experience continuous negative health effects such as respiratory problems, birth defects, leukemia and cancers. California’s answer to our global climate crisis, the Cap and Trade extension (AB 398), will continue allowing refineries to expand, pollute, and ultimately destroy life.”

“The Phillips 66 Refinery in Rodeo, CA plans to expand their marine terminal to increase crude oil imports by water from 30,000 barrels a day to 130,000 barrels a day. We will not let this happen. Decision makers around the world need to understand that Governors Jerry Brown’s carbon market scheme will continue killing our people and poisoning our water, air, and soil. We will not accept the false solution of carbon trading that increase pollution in our hometowns while violating indigenous rights and human rights around the world. We must keep fossil fuels in the ground,” said Ilario.

Ninawa Nuneshuni Kui, President of the Huni Kui People of Acre, Brazil, said Brown’s “American Pledge,” based on environmentally unjust carbon trading, would lead to the displacement of his people and the destruction of his land.

“I wanted to leave a message here, for humanity and all of planet, that the peoples need to join to defend Mother Nature, the soil, water and air because they are being threatened,” said Ninawa Nuneshuni Kui, President of the Huni Kui People of Acre, Brazil. “And humanity needs Nature to survive. So I want to say that Nature and the air are not a means of commerce for anyone and it’s every human’s right to live in peace. Jerry Brown’s ‘American Pledge’ will lead to the displacement of my people and the destruction of my territory. We need to respect the rights of Nature and humans beings that need her to survive.”

Eva Malis, a young person from Valencia, CA, pointed out that Californians have been asking Governor Brown for years to step up and “be a true climate leader.”

“If he is going to be celebrated by the world as a climate leader, he needs to commit to the communities on the frontlines of fossil fuel extraction. Real climate leaders don’t frack. This isn’t just about Californians. The world needs Jerry Brown to do more in his own state,” said Malis.

“California Governor Jerry Brown is one of the biggest liars when it comes to being a ‘climate leader,’” summed up Isabelle Zizi of Idle No More SF Bay. “In 2014, hundreds of our drinking water and agricultural aquifers were contaminated with 3 billion gallons of fracking wastewater. The cap and trade bill that he passed in the summer of 2017 is in favor of more greenhouse gas emissions, more offsets for the fossil fuel industry, and is a false solution to stop climate change.”

Zizi is in Bonn for the UN Climate Talks. Follow her for updates on actions from the #ItTakesRoots delegation of Indigenous people, frontline communities and people of color.

While Brown portrays himself as a “climate leader,” he has in fact received over $9.8 million in contributions from oil, gas and utility companies, often within days of winning big political favors, according to Consumer Watchdog’s “Brown’s Dirty Hands” report released in August 2016.

The report claims that twenty-six energy companies including the state’s three major investor-owned utilities, Occidental, Chevron, and NRG—all with business before the state—donated $9.8 million to Jerry Brown’s campaigns, causes, and initiatives, and to the California Democratic Party since he ran for Governor.

The report calls for a moratorium on the building of natural gas powered electricity plants, given what they described as “the glut of electric capacity,” and calls for an outside audit of the state’s energy needs. The groups showed how California can improve its environmental protections to meet standards set in other states. The document also urged Brown to abandon his Delta Tunnels project, a plan to construct two massive tunnels under the Sacramento-San Joaquin River Delta, and to make water conservation a priority.

While Brown portrays himself as the “resistance” to President Trump’s positions on climate change and other issues, it is worth noting that Brown and the Trump administration appear to share a lot of common ground on many issues, including water infrastructure, public lands, the Delta Tunnels and the expansion of fracking in California. On April 13, Brown and Secretary of Interior Ryan Zinke had a “positive and productive” meeting during the Secretary’s visit to California, according to Zinke.