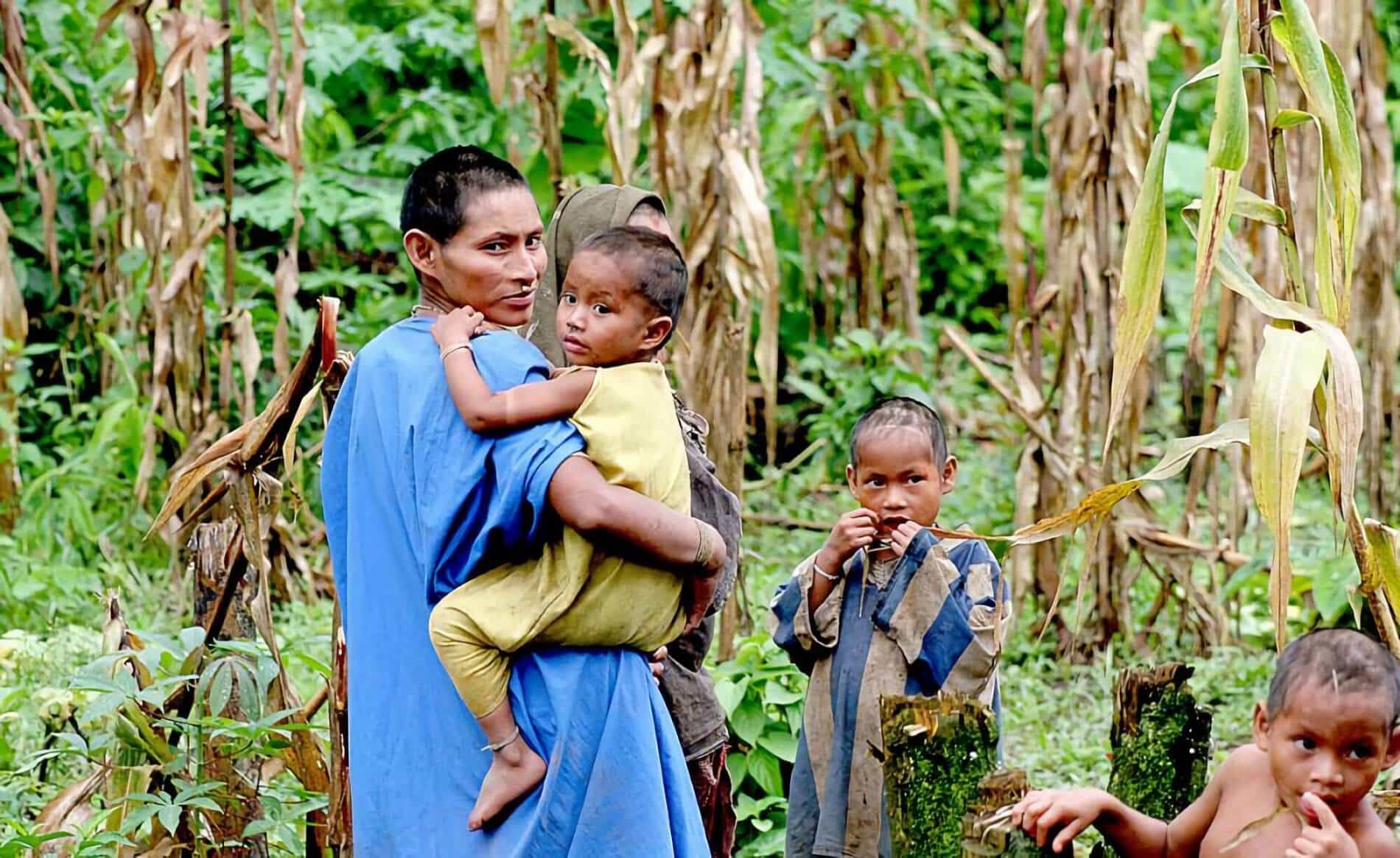 The Peruvian Government is updating the legal status of one of Peru's most important reserves, reportedly exposing 'isolated' indigenous groups to danger.
Matsigenka-Nanti mother and child in the Kugapakori-Nahua-Nanti and Others' Reserve. Javier Florez.
Support our journalism. Become a Patron!

Indigenous leader Richard Rubio Condo was sitting in a strip-lit office in central Lima. He was a long way from his home along the Napo river in the Amazon.

He told The Ecologist: “An indigenous person without territory won’t survive. He won’t have a future.”

Rubio Condo, vice-president of national indigenous federation AIDESEP, wasn’t talking about himself or any of AIDESEP’s other leaders. He was talking about indigenous people in the remotest parts of the south-east Peruvian Amazon.

He explained: “In terms of health and life, these isolated groups are very vulnerable. A cold could kill them, a chainsaw could terrify them. Their right to life is more important than money or investment.”

The reason for Rubio Condo’s concern was simple. The government is currently updating the legal status of the oldest reserve in Peru for indigenous people living in “initial contact” and “isolation”, as the UN calls them.

Now known as the Kugapakori-Nahua-Nanti and Others Reserve (KNNOR), it stretches for over 1.1 million acres across the Cusco and Ucayali regions.

But according to AIDESEP, this could be catastrophic for some of the people living there.

Transforming the KNNOR from a “territorial reserve”, as it has been since 1990, into an “indigenous reserve”, in accordance with 2006 and 2007 laws, would expose it to several dangerous loopholes.

Rubio Condo, a Kichwa man, continued: “The law says that if there are natural resources in the public necessity you can exploit them. So where’s the protection?”

This 2006 law states that indigenous reserves are “intangible”, but one clause, Article 5c, permits natural resource exploitation – as AIDESEP highlighted in a report last year.

In addition, the federation argues that updating the KNNOR would mean losing the protection of a 2003 law specifically banning “new natural resource exploitation rights” in the reserve.

Such loopholes are particularly dangerous for the KNNOR because of the massive gas deposits – reportedly discovered by Shell in the 1980s – underneath it.

In 2000 a concession was superimposed over more than 250,000 acres of the reserve, and four years later a consortium including Pluspetrol, Hunt Oil and Repsol began producing gas.

The multi-billion dollar Camisea project, as operations have become known, has been described as “without precedent” in Peru’s recent economic history.

While it has generated huge revenues and 1,000s of jobs, it has reportedly had devastating impacts on wildlife, rivers, fish stocks, and the health and lives of indigenous people in the region, including the Nahua and Nanti or ‘Matsigenka-Nanti’.

The study required to update the KNNOR – called an Estudio Adicional de Categorización(EAC) – was initially going to be financed by the Inter-American Development Bank (IDB). But it pulled out in 2015 after it was agreed with the Culture Ministry – the government institution overseeing the process – that updating the reserve could weaken it legally.

Following a complaint by AIDESEP to the bank’s Independent Consultation and Investigation Mechanism, the IDB acknowledged last year: “Management states that it believes that such reclassification could infringe upon the current level of protection of the KNNOR.”

However, the Andes Amazon Fund (AAF), which describes itself as a “project” of the US-based New Venture Fund, subsequently stepped in.

According to AIDESEP, AAF money channeled into Peru via an NGO called the Asociación para la Conservación de la Naturaleza (ACCA) is financing another Peruvian NGO, ProPurús, to conduct the study that the IDB backed away from.

Cauper Pezo accused them of endangering indigenous peoples’ lives and “facilitating the promotion of extractive activities” in a supposedly intangible area. He urged AAF and ACCA to suspend financing, and requested ProPurús to do likewise with its research.

The only organization to respond to AIDESEP, according to Rubio Condo, was AAF. Enrique Ortiz, its programs director, stated that they share the federation’s concerns about the potential danger to the KNNOR.

Ortiz wrote: “We believe that the process to update these territories – as required by law – should be accompanied by legislative reform that ensures the survival of the [indigenous people in isolation].

“Given that, we’re including, in our strategy, actions to eliminate the aforementioned risks. Debate between government and civil society is necessary and we’ll be helping with that.”

In a statement to The Ecologist, AAF claimed it is “collaborating” with AIDESEP: “The policy and intent of the AAF for grantmaking concerning voluntarily isolated peoples (PIACI) in the Amazon is always to protect these indigenous groups from harmful contact and to ensure that the forest that they depend upon is rigorously protected.

“We’re in frequent dialogue and collaboration with the leadership of AIDESEP, FENAMAD, and other indigenous organizations regarding the protection of PIACI”

Elsewhere across Lima, ACCA’s Ronald Catpo told The Ecologist that he wasn’t aware AIDESEP had written to his organization, but that he knew of their concerns.

He made it clear he felt the process to update the KNNOR should continue, saying that it would be better if AIDESEP raised such issues at a later stage and that the Culture Ministry had assured indigenous leaders that thereserve wouldn’t be weakened.

Catpo, based in Cusco, said: “The Ministry met with AIDESEP and told them it wouldn’t be like that [permitting natural resource exploitation].

“They said it would become an indigenous reserve and the interests of the local population would be guaranteed. And there’ll be more attention from the government. I think that lowered tensions.”

Catpo emphasised that institutionally ACCA, whose sister organization is the US-based Amazon Conservation Association (ACA), is opposed to more gas or other kinds of natural resource exploitation in the KNNOR: “These are very significant areas for conservation, biodiversity and ecosystem services.”

Capto continued: “For us, as conservationists, it’s very important that there are no serious impacts like the Camisea gas project, or something like that.

“We believe everything should be done to make sure that doesn’t happen. ProPurús is the same. They’re very concerned too. What they want is an indigenous reserve and a very clear agreement [that no more natural resource exploitation will take place]. I think that’s what’s going to happen.”

But Angela Arriola, an anthropologist with AIDESEP, dismissed any assurances made by the Culture Ministry: “That’s just empty talk.

“They could change Ministry personnel the next day, and nothing would be any different. ACCA and Andes Amazon can share our fears – even the consultants doing the research, ProPurús, can share our fears- but none of them can control what happens in the end.”

In addition to requesting that AAF et alsuspend the process to update the KNNOR, AIDESEP has urged the Culture Ministry to do likewise.

After receiving no satisfactory response, the federation filed a lawsuit last year demanding, among other things, that the Ministry is ordered to forgo updating the reserve.

Arriola told The Ecologist: “The risks are imminent. A sentence is expected this month.”

AIDESEP insists that it is not opposed outright to updating the KNNOR. What it wants – first – is a “legal guarantee” from the government that the reserve won’t be weakened, and the loopholes such as Article 5c eliminated.

Rubio Condo said: “As we’ve told Culture, updating the reserve without previously establishing it won’t be weakened legally would be a serious risk to the people living there.

“That means, before going ahead, we need a Supreme Decree law or a ministerial resolution ensuring that no resource exploitation can be done.”

ProPurús and the Culture Ministry didn’t respond to requests for comment.

David Hill is a freelance journalist and environment writer, writing for the Guardian, The Ecologist and other publications. For more details see his website or follow him on Twitter: @DavidHillTweets.

This article was originally published by our media partner, The Ecologist. It has been re-published at IC with permission.