Given the sheer amount of cruelty and violence that surrounds the production of mobile phones–whether it’s brought to you by Nokia, Motorola, Blackberry, Apple, Samsung, LG, Sony Ericsson, or Toshiba–I want you to know that there is an ethical, fair trade alternative: the Fairphone.

These days, mobile phones could be considered a mainstay in the activist toolbox. I may not own one myself, but I see the potential all too clearly: No longer do we have to lug around awkward camcorders to document human rights abuses or buy even more expensive equipment to quietly record closed-door meetings. We can stream live or upload a new video to youtube–and, while we wait for it to finish, we can reach out to important contacts and send out public notices on twitter and facebook. What’s more, we can do it all in the bush.

However, there’s one major problem that most activists out there are content to ignore: how those mobile phones were made.

A few questions we should be asking ourselves: where were the phones manufactured? Where did the minerals used in the manufacturing process come from? And who exactly profits?

Given the nature of the global indigenous struggle which we’ve been covering here at Intercontinental Cry for the past nine years, Indigenous Peoples should be especially concerned about these questions. After all, in countless cases

1) minerals used in mobile phones come from traditional indigenous lands;
2) those mines make use of child slaves;
3) profits from those minerals fund Rebels, militias and army units who engage in terror campaigns against innocent populations, for instance, in the Democratic Republic of Congo (DRC).

On top of that, there are numerous documented cases where child labour has been used in the manufacturing of mobile phones. It only gets worse from there.

While all of this is reason enough to dismiss the use of mobile phones (and computers for that matter) altogether, there is an alternative–providing of course that we care about respecting the rights and dignity of all our brothers and sisters around the world.

Enter the FairPhone: a mobile phone with a conscience

Before today, I’ve never promoted a product of any kind on Intercontinental Cry, however, given the sheer amount of cruelty and violence that surrounds the production and purchase of mobile phones–whether it’s brought to you by Nokia, Motorola, Blackberry, Apple, Samsung, LG, Sony Ericsson, or Toshiba–I want you to know that there is an ethical fair trade alternative. 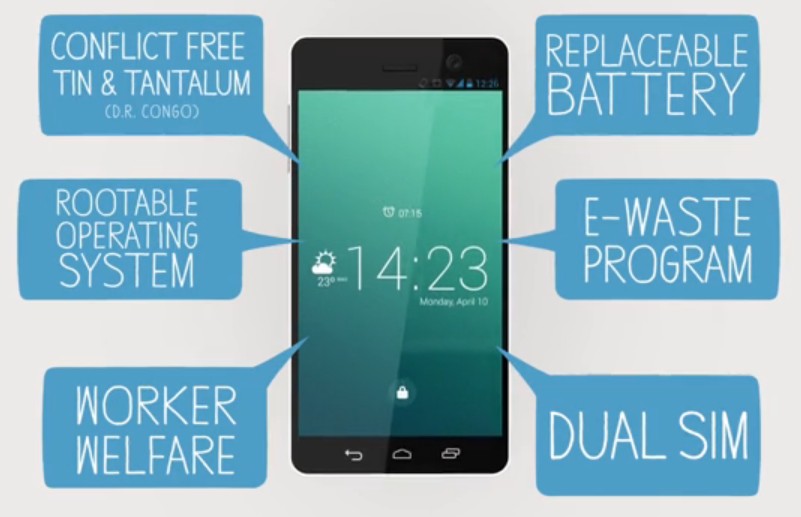 FairPhone is a new social enterprise based in Amsterdam (Netherlands) that’s working to develop a smartphone that is “designed and produced with minimal harm to people and planet”.
According to the company’s website, “The main motivation for founding FairPhone was to develop a mobile device which does not contain conflict minerals and with fair labor conditions for the workforce along the supply chain.”

As noted by the Verge, they’re addressing the massive problem of e-waste by working with the recycling coalition Closing The Loop “to buy discarded scrap from affected areas, processing what can be safely recovered locally and shipping the rest to professional recyclers in Europe.”

In addition to safe recycling practices, they’re working to form long-term relationships with suppliers to ensure good working conditions, something that is followed up with a transparent price breakdown that enables you to know exactly what your purchase is supporting and where the phone’s components come from.

Last but not least, the Fairphone is crowdfunded. As explained on the company’s blog,

We are a social enterprise with a delicate mission in a very competitive market. Independence is what makes Fairphone credible. It is part of our core philosophy to be independent from any of the big players of the ‘old’ economy in which the practice is that profit drives operations. This difference, and our way of doing it, is important, as we want to do things differently. The “danger” in working with too many capital investors at this point (several have shown serious interest already) is that we create an imbalance between our mission and our company objectives (the profits). We haven’t got revenue yet, which makes us vulnerable.

For them, it’s all or nothing. They need 5,000 phones to be pre-ordered by June 14 before they can begin production. Right now, they’ve sold 2,894 phones.

Unfortunately, right now the Fairphone is only available to people in Europe, so I can only hope that, when they reach their goal, we will see them everywhere from Chile to Canada.