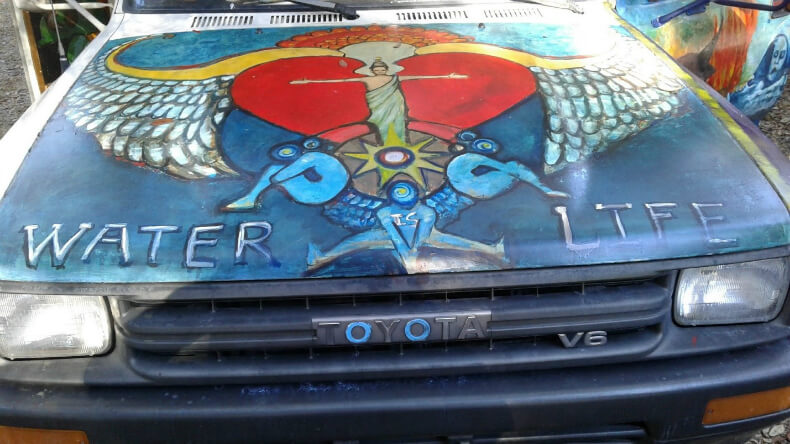 The sometimes infamous, always interesting, U.S. ‘rebel south’ has embraced a new and worthy cause, and joined the Indigenous activated intersectional movement of oil pipeline resistance.

The Sabal Trail Pipeline will cut a winding, roughly 515-mile path through biodiverse, ecologically vulnerable, and otherwise controversial regions of Florida, Georgia and Alabama. One of at least a dozen pipelines currently moving forward in the U.S., the Sabal Trail would also impact as many as nine separate indigenous territories.

Despite its sociocultural bad rap, the southeastern U.S. has always been about much more than rebel flags, slippery politicians, and over-the-table racism. The state of Georgia originated as an anti-slavery and anti-debtors’ prison (similar to the modern anti-mass incarceration movement) colony. Founder James Oglethorpe got along fairly well with the region’s Native American populations. As Cherokee lawyer and professor, Dr. Jace Weaver observes in ‘The Red Atlantic: American Indigenes and the Making of the Modern World, 1000-1927 ’ it wasn’t until the end of Oglethorpe’s tenure that the sociopolitical tide began to turn away from the arc of justice.

Florida, meanwhile is home to the famous Seminole Nation, who notably resisted wave after wave of settler occupation and attempted colonization. Having never surrendered to the U.S. government, the Seminole Nation remains unconquered to this day. 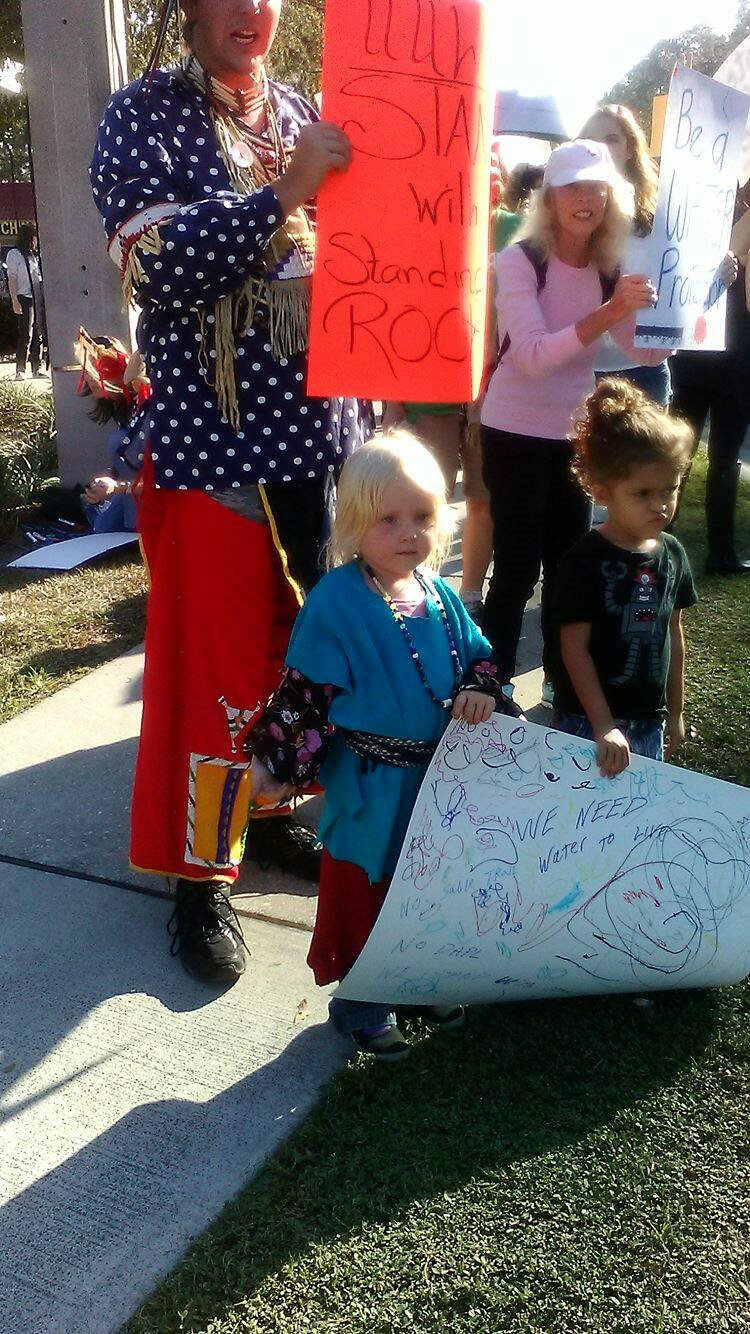 In more recent times, thousands of activists, environmentalists, alternative lifestyle seekers and social justice advocates have flocked to Florida’s Ocala National Forest each winter for the annual regional Rainbow Gathering – an Indigenous tradition-inspired, intersectional cultural phenomenon that has been generating full time activists and change-makers for decades. While the Rainbow Family is generally noble, global, and ultimately impossible to either praise or criticize as a singular entity, some of the more lost souls wandering on the fringe of Rainbow culture have damaged relations with some Indigenous groups and nations – the current dire situation might warrant a clean slate moving forward in what could be an invaluable activist alliance. 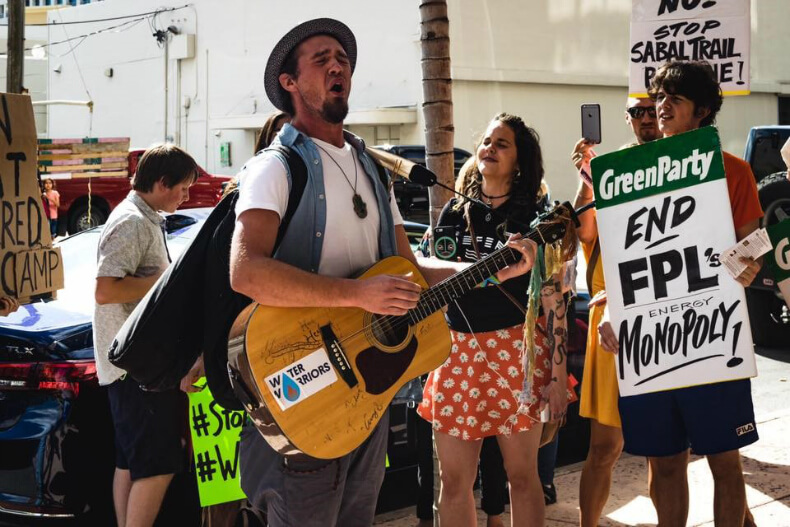 Indeed, critics of the Sabal Trail Pipeline are emerging from all sectors of society in a spirit of almost unparalleled intersectional collaboration. Indigenous and environmental activists are working with established nonprofits, academics, government allies, economic analysts, faith-based groups, and scientists. At one point, even The Environmental Protection Agency (EPA) expressed serious doubts on the project’s safety and sustainability; their complete, abrupt reversal later on led to questions about whether powerful financial backers behind the mega-project found a pressure point to intervene.

Such apparent collusion begs the question: are oil industry states the new banana republics? The parallels grow more and more striking; and, many signs (including of the handmade protestor variety) point to yes, as a spirit of resistance emerges in kind to this new, old paradigm. 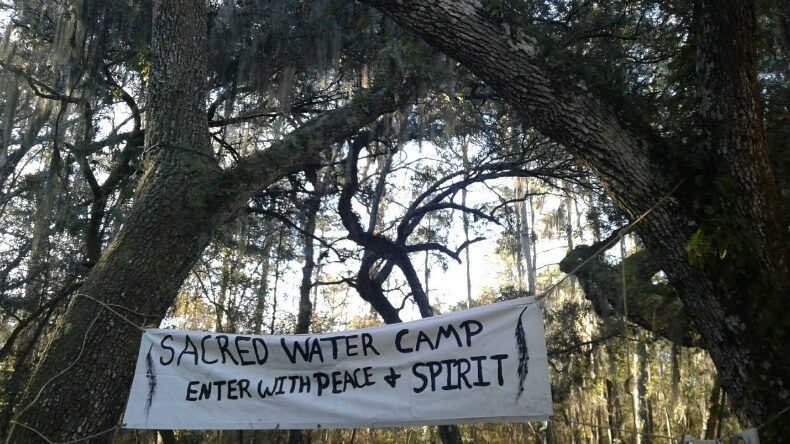 The consensus among water protectors from these increasingly diverse yet converging walks of life is clear: building more oil infrastructure at this critical juncture in time and space does not make sense economically, environmentally, or ethically. It has been estimated that the Sabal Pipeline could impact as much as 60% of Florida’s potable water supply.

In December, less than a week before China seized a U.S. military vessel – communicating an undeniable geopolitical message to the U.S. government – Florida Highway Patrol took a U.S. navy veteran into custody as a clear warning to the growing resistance movement mobilizing against the Sabal Trail project. 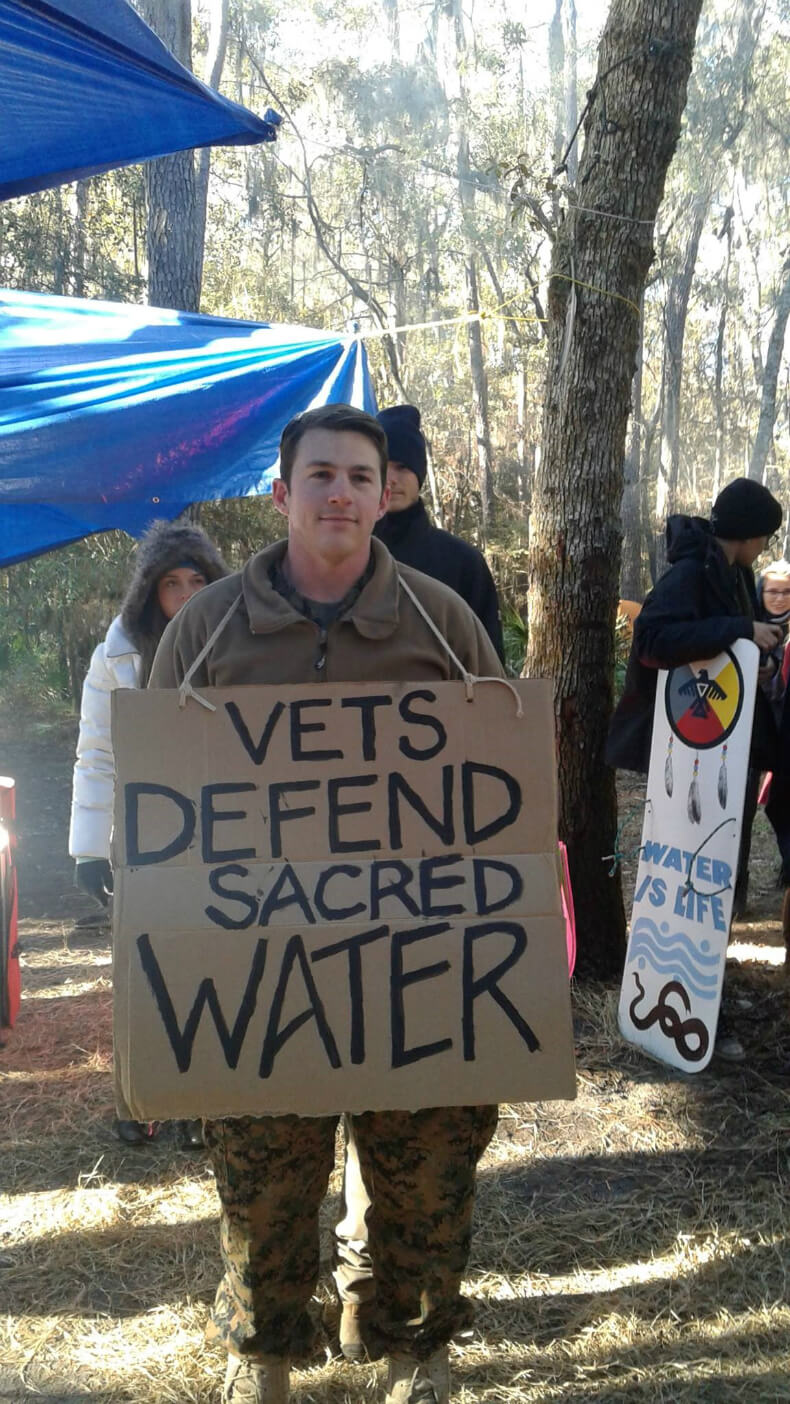 Josh Peebles had driven up from Jacksonville, Florida to take part in a peaceful protest at Live Oak on Dec. 10, and was arrested and taken into custody for simply crossing the highway (according to nearby witnesses).

The sign he was carrying (pictured above) plainly read “Vets Defend Sacred Water” and clearly identified Peebles as a veteran prior to his arrest. He was the only water protector detained at this protest.

While Peebles was soon released, some of the more irreparable impacts of pipeline construction thus far include the permanent desecration of fragile ecosystems and the destruction of Indigenous sacred sites. 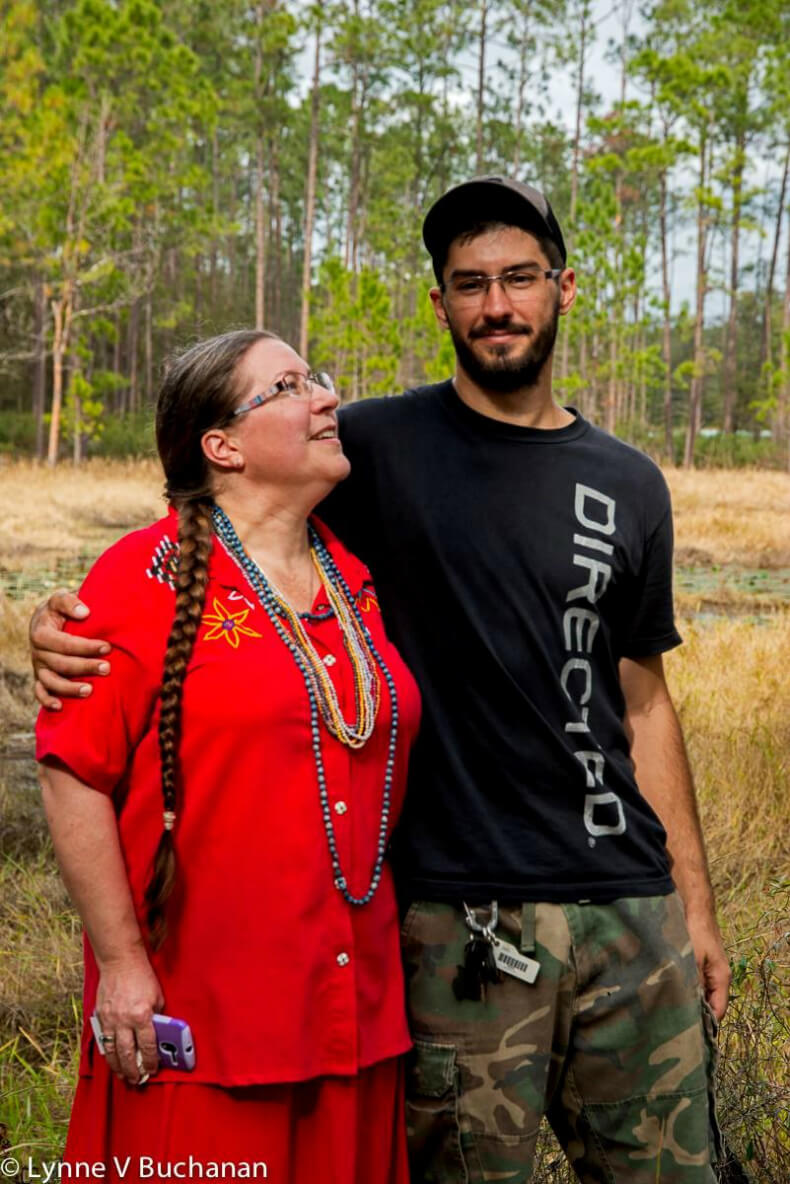 A video produced by Dylan Hansen and distributed by Balance For Earth recently went viral through environmental justice social media networks. Footage featured Tina Elmore-Wright describing how the pipeline has already irreversibly defaced a tribal cemetery, perpetually disabling her family from conducting a proper burial ceremony in alignment with tribal tradition for her father, who is currently an elder ward of the Seminole Tribe of North Florida (Mvskoke). Elmore-Wright told IC the sacred cemetery was demolished following previous assurances that the mega-project would be re-routed around it in response to, and out of respect for, their concerns. 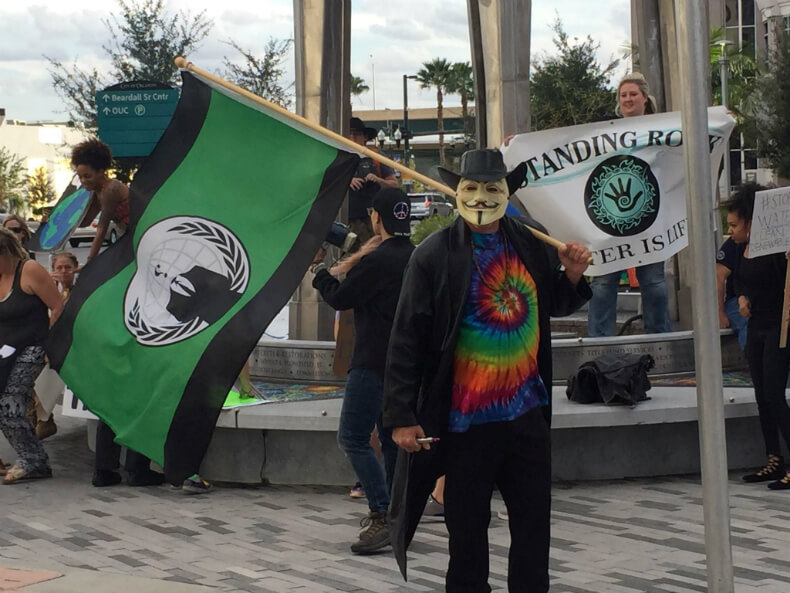 Florida has always had a strong underground activist and environmentally conscious community, and the struggle against Sabal Trail Pipeline has found many ready to engage on the frontlines. While local activists such as Anita Stewart have been organizing to resist its construction since as early as 2013, the movement has been galvanized by the electric spirit around #NODAPL at Standing Rock. 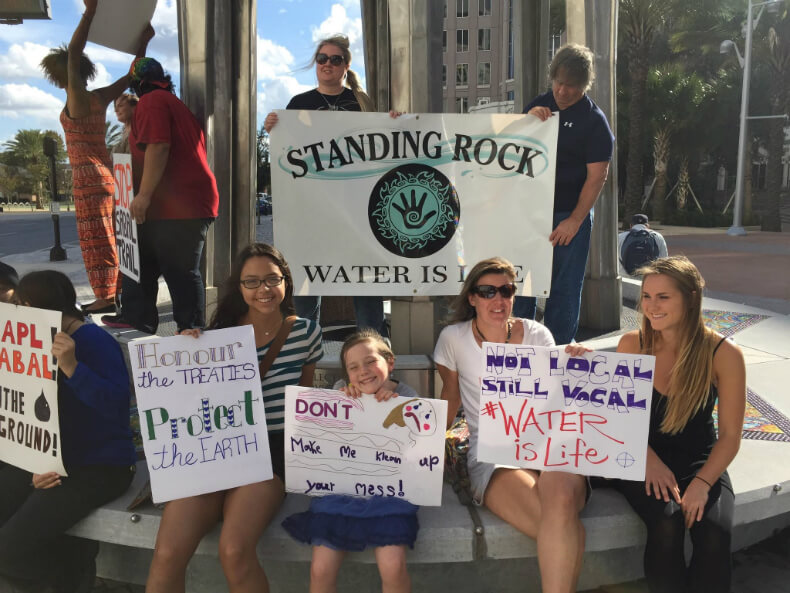 Stewart – whose family is from Quebec and embraces her own Metis heritage – told IC:

“We need everything to fight this head of the black snake! We need water protectors, people who can call the elected officials, we need frontline activists, people who are ready to lock down on equipment, media coverage and lots of support at the camps in diverse ways. There are 44 pipelines either being built now or being planned for North America (Canada, Mexico, U.S.). Not known by many, we here in North America are now living in the new “sacrifice zone.” What has happened over the years to Louisiana will soon happen here in Florida and indeed, everywhere on our continent.” 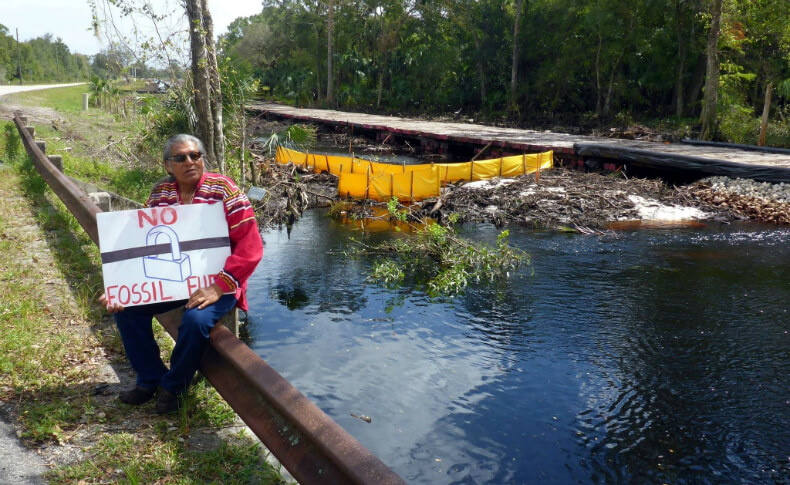 Stewart described how on Nov. 14, 2013, she met with Indigenous leader Bobby C. Billie, Dona Knapp and Shannon Larsen in Brooksville, Florida at Green World Path after the elder had delivered a special speaking presentation; and, the group began organizing a larger collective movement. Bobby C. Billie is considered by many to be the original, generative and consistent Indigenous presence in the Florida pipeline fights thus far. 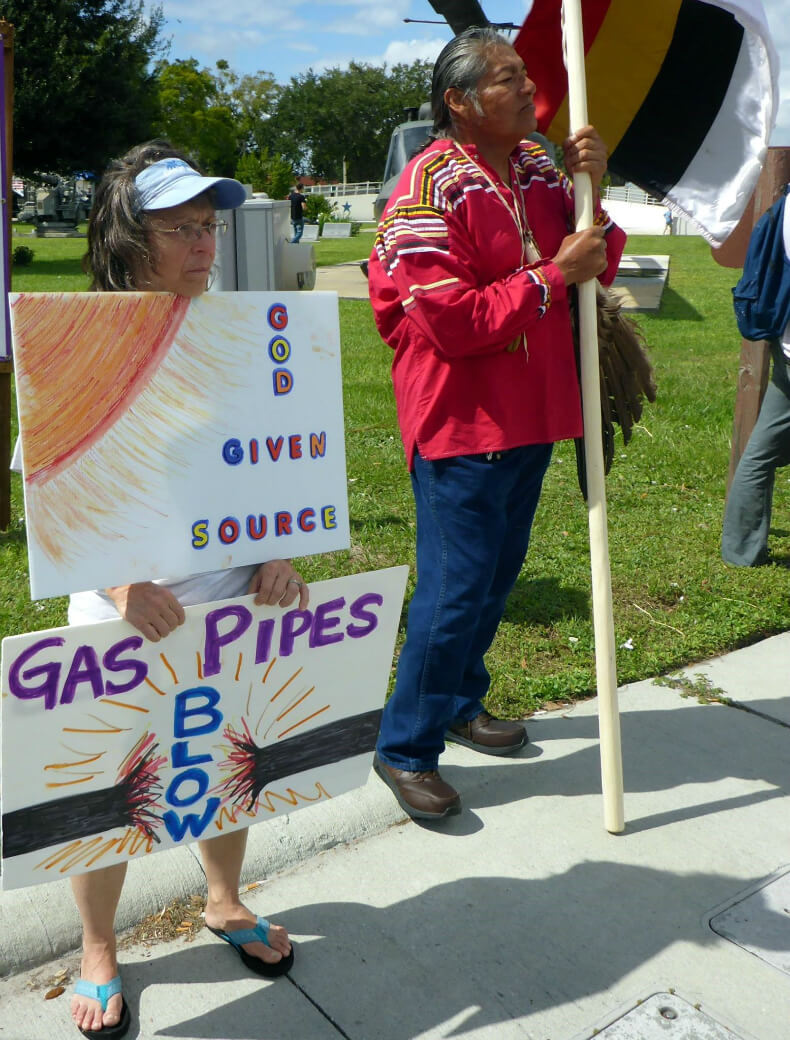 Clan and spiritual leader of the Original Miccosukee Simanolee Nation Aboriginal Peoples, Billie has been a longtime ‘rights of nature’ advocate and manages to weave this theme into all his public talks. The elder advises and reminds his community – and the world at large – that nature has the right to survive and raise families in the same manner as humans do, “from the biggest to the smallest, from the ant to the whale”. Billie laments on how an increasing measure of the natural world is becoming virtually homeless, forced to exist on a mere sliver – “a thumbnail” – of space in attempts to survive the ongoing encroachment and reckless pollution of humankind.

As Billie has said, “We can survive without the money and Sabal Trail Pipeline, but we cannot survive without clean air, clean water, and Nature… Our People have a prophesy about this [pipelines]. The prophesy tells us this is one of the last things. They are going to destroy the Air, and the Environment, and the human life. That is why we do not want to see Sabal Trail Pipeline happen.” 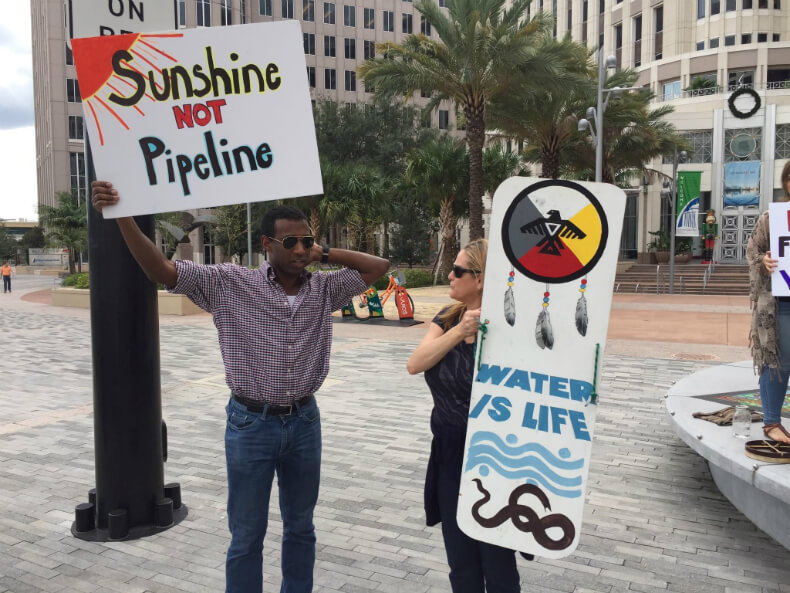 On Dec. 29, activists across the state of Florida took part in a synchronized day of action which included relatively large and visible street protests in Miami, Fort Lauderdale, Orlando and Jacksonville. 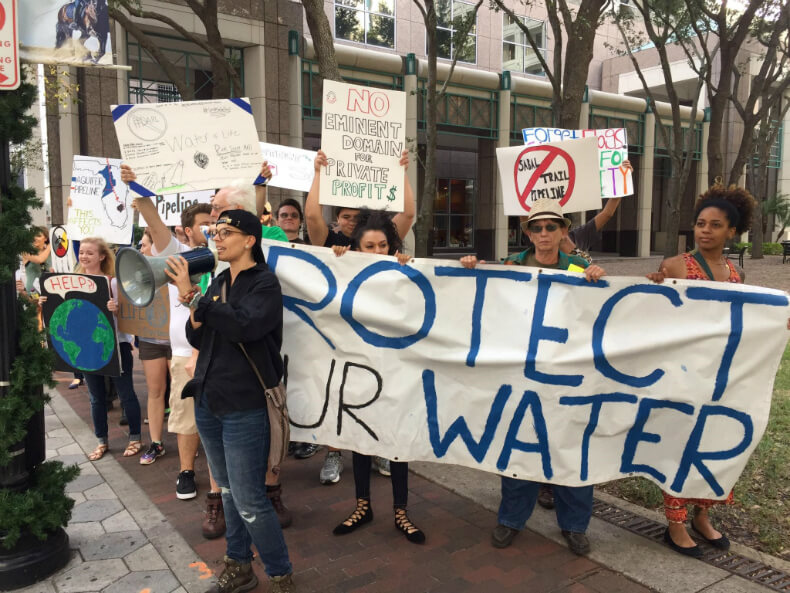 The Sabal Trail Transmission is aiming to initiate operations as soon as May or June of 2017. The pipeline is currently slicing through 268 miles of Florida, 162 miles of Georgia, and 86 miles of Alabama.

This detail didn’t make the cut on the ostensibly informative official pipeline website, which predictably leans more towards aggrandizing company propaganda. It also has an odd feature where visitors can supply their personal information in a show of ‘support’ to the Federal Energy Regulatory Commission.) And despite their boastful claims regarding the project’s projected economic impact, more and more area residents are simply not buying it. 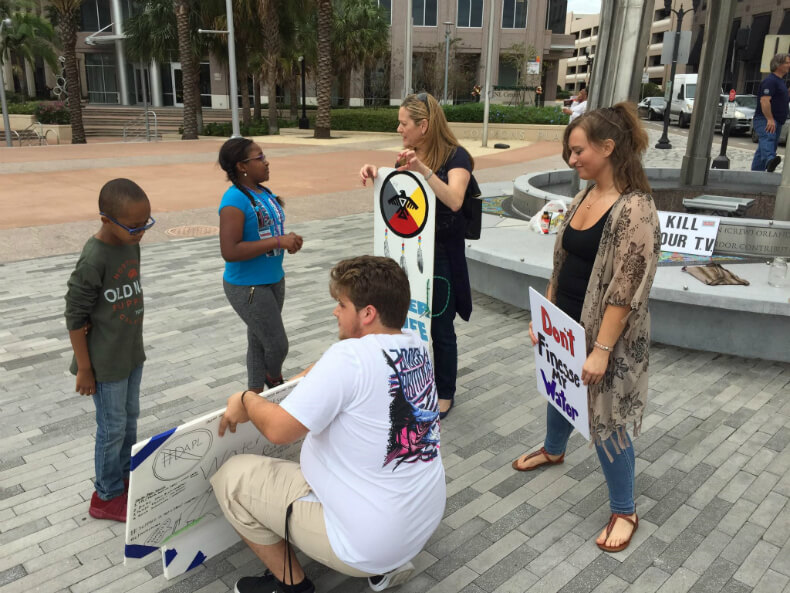 Companies financing the Sabal Trail Transmission include: Spectra Energy Corp, Duke Energy, and NextEra Energy, Inc. Florida is set to be the main beneficiary in terms of natural gas provided to Florida Power and Light which is also owned by Duke and NextEra. 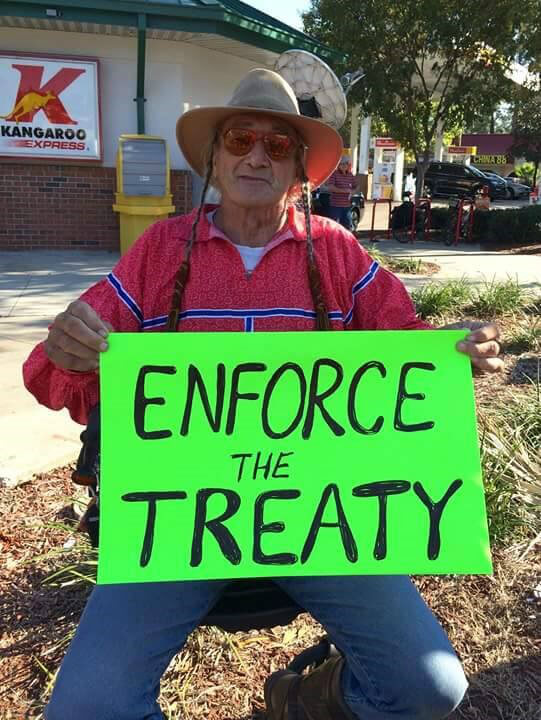 Pipeline construction is progressing rapidly through the state of Georgia. According to the Director of Stakeholder Outreach for Sabal Trail Transmission, around 80% of the pipeline route has already been cleared in Southwest Georgia, with a whopping 60% already in the ground.

On Dec. 29 – while protestors took to the streets around Florida – the iconic Athens, Georgia music community came together to raise money for legal and medical expenses at Standing Rock. Renowned artists from the Athens music scene, representing such cult classic supergroups as Olivia Tremor Control and Pylon – including John Kiran Fernandes and Vanessa Briscoe Hay – shared the stage with artist, mental health counselor, Muscokee Creek elder and veteran, Robert Black Eagle Costa to express their support for pipeline resistance. 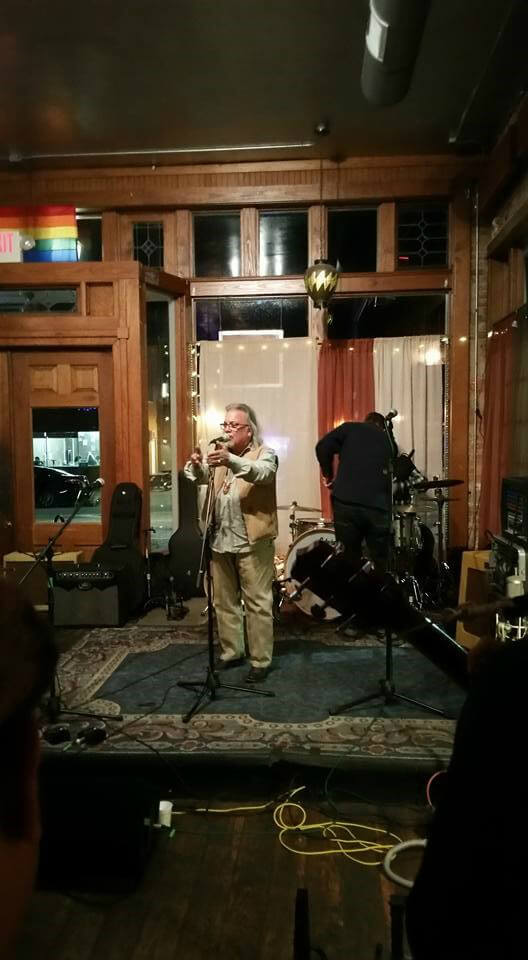 Costa also volunteered his time at Standing Rock – some of his notable work in the medical area of the Oceti Sakowin Camp is featured here by APTN National News – and has described the violent tactics of oil industry backed authorities there as nothing short of war. Costa delivered a solidarity statement to Standing Rock leadership from the Muscogee Creek chief and facilitated the mental health team at the encampment for several weeks. He shared his perspective on these issues with the Athens community and performed on acoustic guitar at the Little Kings Shuffle Club’s ‘Athens Stands With Standing Rock’ community action last week. 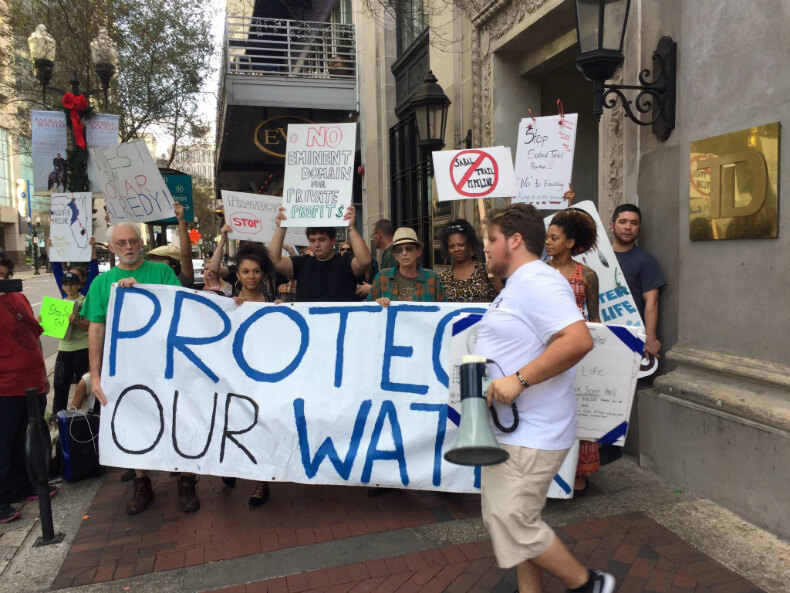 Though activists and water protectors are gearing up, time is essentially running out.

For those who would like to offer direct support or contact any of the water protector camps central to the Sabal Trail Pipeline resistance, information has been provided below.