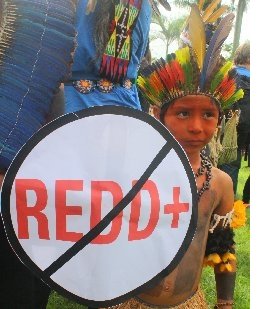 Indigenous Environmental Network – From Africa to the Amazon, from Chiapas to Siberia, global civil society is raising an international outcry to resoundingly reject California’s proposed forest offset scam called REDD, which would let climate criminals like Chevron and Shell off the hook, cause human rights abuses and worsen global warming. May 7, 2013, was the last day for public comments on the draft California REDD Offset Working Group recommendations regarding linking California’s cap-and-trade program with a program to supposedly reduce deforestation in Chiapas and Acre, Brazil.

California’s Global Warming Solutions Act, AB32, is posed to include REDD (Reducing Emissions from Deforestation and forest Degradation), a false solution to climate change, whereby California polluters could use the forests of Chiapas, Mexico and the Brazilian Amazon as sponges for their pollution instead of reducing greenhouse emissions at home. California REDD is considered a model for the world and if launched will probably be replicated both nationally and internationally.

“The global movement against REDD has been born!” cried Susannah, a delighted volunteer with the No REDD Group Initiative as she tallied letters from all over the world to California Governor Jerry Brown and the California Air Resources Board demanding that REDD be immediately stopped in its tracks. “The world is uniting against California REDD because it may unlock an avalanche of REDD-type projects around the world.”

According to the news agency Al Jazeera, the opposition to California REDD is “as diverse as it is fierce.” More than a thousand organizations and individuals including Greenpeace, Friends of the Earth, Sierra Club California, Amazonian chiefs crowned in feather headdresses, an African Alternative Nobel Laureate, Mayan healers from the misty highlands of Chiapas renown for the Zapatista uprising, Siberian biologists, Ethiopian village leaders, wonky European experts, Los Angeles high school students, and California communities living in the shadow of cancer-causing oil refineries have united to express their outrage over REDD and the possible betrayal of California’s visionary environmentalism.

Indigenous Peoples and communities of color of the Golden State do not mince words about REDD’s spiritual and physical dangers. According to Chris Peters (Pohlik-lah/Karuk), President of the Seventh Generation Fund, “It is a breach of the ethical foundation of Earth-based spiritual understanding to sell the air and to continue unabatedly polluting for personal and corporate profit. As an Indigenous organization located in the far north redwood forested region of California, we stand firmly and in solidarity with our brothers and sisters of the global south in absolute opposition to REDD.”

California residents know that REDD will sicken them. According to Sandy Saeteurn a community organizer with Asian Pacific Environmental Network, REDD threatens the future of the children of California. “I’ve been a Richmond resident for most of my life and my elementary school was right next to the Chevron refinery. Everyone I grew up with knows someone who is sick from the pollution: an asthmatic child, an uncle with heart disease, or an aunt dying of cancer. A California REDD program would rob us of the opportunity to reduce the pollution at the refinery, and to give our kids cleaner air to breathe and a healthier future. And the fact that it would be at the expense of communities in Chiapas, Brazil, and Nigeria is unacceptable.”

But Chevron is not the only oil giant getting in on the REDD scam. Shell oil company recently purchased 500,000 carbon offsets credits from a forestry project on over 200,000 acres in Michigan “that not only will grant Shell’s refinery in Martinez, California permission to pollute, but will push the planet further down the road to catastrophic global warming,” according to Oilwatch International.

An open letter from Mayan peasants and their allies in Chiapas, Mexico is categorical. “We reject REDD in all its forms.” They also denounce that the REDD definition of forests allows for monoculture tree plantations and biofuels, which are already causing environmental destruction and social conflicts.

Groups from the Brazilian Amazonian State of Acre condemn REDD as a “neocolonial proposal” that deepens social injustice and does not reduce emissions. They also denounced that in the preparatory process for doing California REDD in Acre, Indigenous Peoples’ rights to full and effective participation and to free, prior and informed consent, enshrined in the United Nations Declaration on the Rights of Indigenous Peoples, are being violated.

Nnimmo Bassey, Alternative Nobel Prize Laureate and co-founder of the No REDD in Africa Network, explains why Africans are vehemently opposed to California REDD. “Major California polluters like oil giants Chevron and Shell, which have caused horrific destruction in Africa, and in the case of Shell, the ecocide of the Ogoni environment, are already doing REDD to greenwash their image and shirk their responsibility to cut emissions. Despite being renowned for its environmentalism, the State of California, by doing REDD, becomes an accomplice to climate criminals and flagrant violators of human rights like Shell and Chevron.”

“In Africa, REDD+ is not just a false solution to climate change but is emerging as a new form of colonialism, economic subjugation and a driver of land grabs so massive that they may constitute a continent grab. We launched the No REDD in Africa Network to defend the continent from precisely the carbon colonialism that the State of California is proposing.”

In Africa, REDD-type and forest carbon projects are already resulting in land grabs and evictions, as well as human rights abuses, servitude, slavery, persecutions and killings. According the The New York Times, over 22,000 farmers with land deeds were violently evicted for a forest carbon credit project in 2011 and Friday Mukamperezida, an eight-year-old boy was killed when his home was burned to the ground.

In Nigeria, REDD is already raising the spectre of persecution and criminalization of activists, including in Cross River State, Nigeria where the State of California intends to have REDD projects. The Executive Director of the Rainforest Resource and Development Centre (RRDC) in Cross River State, Nigeria, Mr Odey Oyama, had to flee his home for several weeks in January and February 2013 due to harassment and intimidation from state security agents. Mr. Oyama is one of the vocal opponents of REDD activities aimed at extracting more forest estates from indigenous communities and similar land grab operations.

Anabela Lemos, Director of Justica Ambiental!/ Friends of the Earth Mozambique warned that “REDD is yet another tool being handed to corporate interests to allow increased abuses of communities, increased land-grabbing and human rights crimes. In Mozambique, REDD will be nothing but a way to destroy the rest of our forests and destroy the communities that rely on them, while benefiting those who already are forest destroyers.” She also added that “In countries like Mozambique, safeguards do not work.”

Tom Goldtooth, Executive Director of the Indigenous Environmental Network, notes that REDD is particularly dangerous for Indigenous Peoples since most of the forests are found in their traditional land. “I am dismayed that after more than five years of REDD negotiations in the United Nations, there are absolutely no legally binding guarantees on Indigenous Peoples’ rights. Now we have a state government in the United States cooking up a model of REDD for the world that would be an act of environmental racism and could potentially cause human rights abuses and cultural genocide. If it goes ahead with REDD, the State of California could eventually have indigenous blood on its hands.”

In their letter to California decision makers, the Global Alliance of Indigenous Peoples and Local Communities on Climate Change against REDD and for Life wrote: “We see the link between California REDD and the green economy, which is nothing more than capitalism of nature; a perverse attempt by corporations, extractive industries and governments to cash in on Creation by privatizing, commodifying, and selling off the Sacred and all forms of life and the sky, including the very air we breathe…We exhort Governor Jerry Brown and the California Air Resources Board to respect Mother Earth and reject REDD from being included in any form in AB32. For the planet and her peoples, it is a matter of life and death.”

But global civil society is not the only one denouncing the dangers of REDD. In the UN-REDD Framework Document, the United Nations itself admits that REDD could result in the “lock-up of forests,” “loss of land” and “new risks for the poor.”

Susannah shrugged as she counted the last hundred letters. “If Governor Jerry Brown does not want to listen to us about REDD, he should at least listen to the UN if he wants to avoid a major international political scandal, which could send him out of office in shame. The political cost of a REDD fiasco could be staggering.”