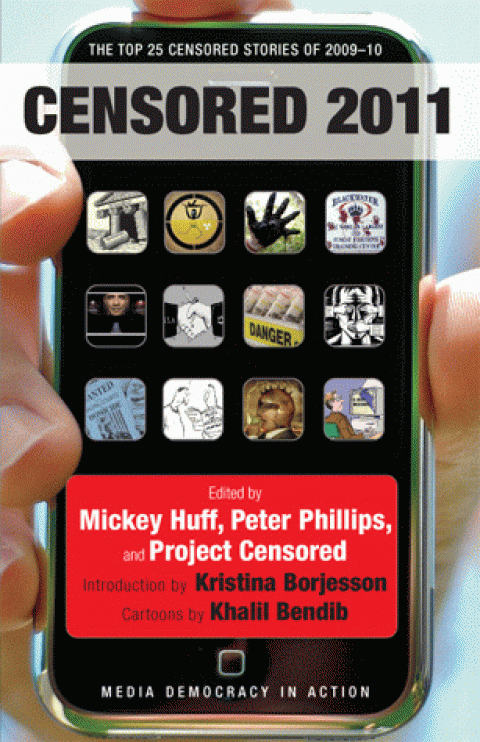 As a lot of you may know, the crises I write about here on Intercontinental Cry usually don’t get much exposure in the press.

It’s pretty infuriating, to be honest, and it’s something that I’d really like to get into at some point; but for now, let me just say that I’m glad we can create our own spaces to talk about what we want to talk about, even if the number of spaces is lacking.

Actually, that’s the whole reason I started this website, and I can’t even begin to tell you how hard I’ve worked to carry it forward. All I can say is that I’ve always done my best. But even so,  I never ever thought I would get and award for for my efforts, let alone one from Project Censored!  I actually got the news a few months back, but I wanted to wait until the book Censored 2011 was on the shelves before I really mentioned it.

I must say, it’s bitter sweet. On the one hand I’m honoured to get the recognition. It’s a pretty big coup for me. But it’s also a little painful because of the actual story that was chosen and the fact that it was ignored by NGOs and all those well paid professionals out there who’d rather write about Britney Spears or “how to bake bran muffins”.

The story, chosen to be  #7 in the top 25 most Censored Stories for 2009-2010 is “Stop Killing and Starvation of Samburu People in Kenya,” published November 20, 2009, https://intercontinentalcry.org/stop-killing-and-starvation-of-samburu-people-in-kenya

I must admit, I didn’t even blink when I wrote that. I was still reeling from the images in my mind of what was happening. In any case I’m thankful for the honour and that this crisis finally received some much-needed exposure.

On an even brighter note, things are looking up for the Samburu. Following my initial report, Cultural Survival (CS) went to Kenya to investigate. Their trip resulted in the report, When the Police are the Perpetrators which really turned out to be a blessing for the Samburu and the other Pastoralists in Kenya.

With the help of Paula Palmer, one of the CS delegates and authors of the report, I was able to put together this update for Project Censored:

In the months following this report, Kenyan police forces led two more full-scale attacks against the Samburu, one of Kenya’s seven distinct indigenous peoples. These attacks, like the ones that occurred throughout 2009, were unprovoked.

For centuries, the indigenous peoples have competed with each other for scarce water resources, to replenish cattle stocks in times of drought, to covet pastures for grazing their animals, and to gain favor in their communities. But for the past fifteen years, arms traders have made weapons available to the population, turning the peoples’ traditional struggle of survival and dignity into one of needless violence.

The government therefore ordered the police to get rid of the illegal weapons and restore peace and stability to the region. However, once they arrived, the police immediately criminalized the Samburu and began to attack their villages, steal their possessions, and confiscate their cattle.

“The brutal intrusion . . . [has] altered and dismantled our oral history. We shall never be the same again,” states Michael Lolwerikoi, in a heartfelt letter on behalf of the Samburu to the US-based group Cultural Survival (CS).

In January 2010, CS sent a research delegation to gather evidence of the attacks. They had been receiving reports from Africa since February 2009. The research delegation was not able to verify some of the reports, including those concerning the military; but after spending two weeks in Kenya, the reason for the Samburu’s “limbo state” was clear. In April 2010, they published a report on their findings: “When the Police Are the Perpetrators.”

Ultimately, the organization’s visit to Kenya played a key role in ending the unnecessary attacks on the Samburu. After their report was received by Kenya’s Minister of Internal Security, the police were ordered to stop using force and to conduct the disarmament operation peacefully. Since then, CS says there have been no further full-scale attacks on the Samburu. However, there is still room for history to repeat. “It’s something that clearly needs international pressure, because the police in Kenya continue to enjoy impunity,” comments Paula Palmer, a member of the research delegation and one of the authors of the report. “[It] mirrors what occurred during the post-election violence being investigated by the International Court of Justice,” she adds.

There is an equal need for international exposure—and there has never been any major coverage of these tragic events. Palmer says they have tried to reach out to journalists from the Guardian, the New York Times, and others but none of the journalists have responded.

The Samburu are asking the government to compensate them for their heavy losses. And they, along with the Borana, Rendille, Turkana, Somali, Meru, and Pokot, want to build lasting peace in the region with the help of their traditional elders. And everybody is eager to get rid of the weapons. “It’s something everybody wants,” says Palmer.

For more information and to learn what you can do to help, please visit www.culturalsurvival.org.

CS posted another update to their site a few weeks ago, letting us know that the Pastoralists Development Network of Kenya (PDNK) is now helping to train the police to be more respectful towards the Indigenous Peoples. “Michael Tiampati, national coordinator of the PDNK, reports that many of the police officers ‘are ignorant because of stereotypes…They are transferred to this area and they want to convert pastoralists to suit their imagined ‘civilised’ society. So we told them of the need to respect the people’s social-cultural-economic and religious way of life because their job is to ensure security of persons and property but not to convert communities.'”

Tiampati says that the training has been “very successful” so far, that the officers were receptive, and that they have “acknowledged that their actions have not met the required human rights standards.” He also says they proposed a ” joint (community & police) training in the villages to create harmony and develop good working relations as well as enhanced training and remuneration of the Kenya Police Reservists. The Pastoralists Development Network of Kenya is now seeking resources to implement these trainings.”

According to CS, the police also “indicated that their orders came ‘from above’ – which underscores the need for continued pressure to be applied to the highest government officials.” To learn more about the Samburu and take action, visit http://www.culturalsurvival.org/take-action/kenya-stop-police-brutality-against-samburu-people