Insiders’ Report From The 4th Indigenous Leaders Summit Of The Americas

As a Caribbean person I felt ashamed and embarrassed by the insulting attitude of the host Government of Trinidad which only allowed for one person, Chief Ed John of the Assembly of First Nations of Canada/AFN, from the 3rd ILSA to address the OAS Heads of State for a mere 5 minutes. Indeed, only one paragraph in the entire post V Summit of the Americas made fleeting mention of Indigenous Peoples. Despite the valiant efforts of the AFN which did a great job organizing the III ILSA in 2009, the political leaders at that time generally treated the Indigenous Leaders of the Western Hemisphere with contempt.

If this is what can be expected from a Caribbean country then I honestly hope that no future Summit of the Americas is EVER held in a Caribbean State with the possible exception of Dominica.

Why Dominica you ask? Because it was Dominica’s UN diplomat decades ago that gave up his seat so that Indigenous Peoples could address the UN General Assembly directly. Dominica also granted it’s sole Indigenous Chief of the Kalinago (aka ‘Carib‘) Tribal Nation with a Diplomatic Passport.

The only three issues that stain the name of Dominica in the eyes of the Indigenous & Human Rights World are its inhumane refusal to increase the size of the woefully tiny Kalinago Territory – which is incapable of sustaining the present Kalinago population, it’s illegal imposition of a Police Station in the Kalinago Territory against the wishes of the Kalinago people – and in violation of International Indigenous Rights Laws and OAS & UN Conventions; and thirdly – the fact that Dominica never brought the Policeman who murdered a peacefully protesting un-armed Kalinago tribesman to justice – it merely moved this murderer in uniform to another Police Station in Dominica.

The Indigenous Summit in Cartegena
At the 4th Indigenous Leaders Summit of the Americas held in Colombia, we were shown a level of respect that I honestly did not expect to witness. 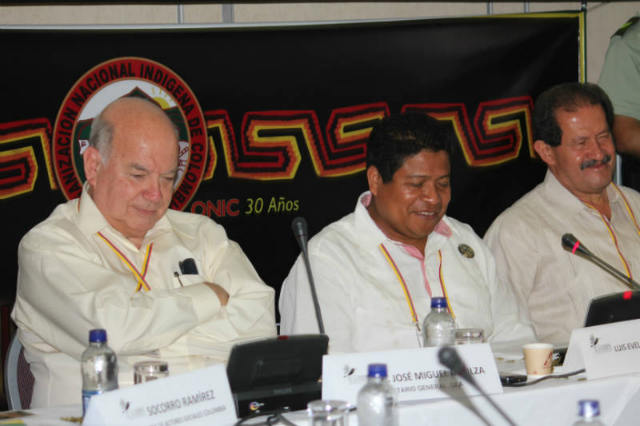 From L to R: OAS Secretary General Miguel Insulza, ONIC High Councilor Ismael Paredes, Colombia Vice-President Angelino GarconThe Secretary General of the OAS, the Vice-President of Colombia, and the Minister of the Interior of Colombia were with us from the beginning; and at our closing ceremony no less than the Presidents of Colombia, Bolivia, every foreign Minister of the OAS – and even USA secretary of State Hillary Clinton herself was present and made a well-received speech.

Thanks to gracious sponsorship by the Organization of American States (OAS) I was availed the opportunity to attend the 4th Indigenous Leaders Summit of the Americas from April 11-13th 2012. I was the representative for the Caribbean on the Planning Committee and the lone representative of the Indigenous Peoples of the Caribbean present at the Summit.

The OAS is aware that I function as a de-facto in-house indigenous journalist for the Caribbean and I use my exclusive ‘eyes & ears’ presence to subsequently write news articles and editorials for local, regional and International media; enabling thousands of others to be informed about key OAS efforts concerning Indigenous Peoples. In my humble opinion, it is a far more valuable contribution for me to function in this capacity in the service of my regional brothers and sisters instead of merely making verbal interventions that few will ever hear and even fewer will ever re-discover once interventions become archived for posterity.

It is well know that I will speak myself if I deem it imperative for me to do so, but at this 4th ILSA there was no shortage of eloquent speakers nor lack of subject areas comprehensively covered with the exception of the status of our Indigenous Taino Peoples of the Greater Antilles being officially recognised despite the political status of Puerto-Rico for example. I listened in order to share now what I heard with all of you.

“I am sad to say that there are still countries in the Americas that do not yet even recognize the de-facto existence of indigenous peoples in their own States – and these countries should do so immediately.” (NB – Suriname was not named by the Secretary General, but is one such country within CARICOM that is guilty of this disgrace – a fact that I have been highlighting in my articles for several years – Damon Corrie)

“In the year 2000 44% of this Hemisphere’s Indigenous Peoples and Afro Descendants were listed as ‘living in poverty’, in the year 2011 – only 30%, so we can see that some progress is being made.”

* Ismael Paredes, High Councilor of the National Indigenous Organization of Colombia (ONIC):
“It is time for the States of the Americas to stop ‘talking‘ and start ‘doing‘.”

“‘Poverty‘ has an entirely different meaning for Indigenous Peoples than it does for non-Indigenous Peoples. For example, the non-indigenous will look into an indigenous home and say that because they have no concrete or tiled floors they are therefore ‘living in poverty’, but for us indigenous peoples who practice traditional spirituality – we know that having an earthen floor allows us to enjoy direct contact with the invisible energies of Mother Earth; and this is one of the greatest sources of our spiritual wealth! Our perspectives and cosmovision are radically different…and the non-indigenous peoples still fail to comprehend that.”

* Angelino Garcon, Vice-President of the Republic of Colombia:
“ALL governments must strengthen local organizations that safeguard the autonomy of Indigenous Peoples. Indigenous Peoples are not merely ‘NGO’s or ‘minority groups’, they have their own histories, cultures, languages, spirituality and territories – and ARE autonomous with their own forms of government; this is a fact all states must be cognizant of and respect.

There is great importance in these times for dialogue between States and Indigenous Peoples, the progressive democracy of the Republic of Colombia has ratified ILO 169 and supports the UN Declaration on the Rights of Indigenous Peoples…and all countries of the Americas should do the same.

States have an ethical and legal imperative to ratify and honor these International instruments concerning Indigenous Peoples.”

“When Indigenous President Evo Morales democratically won the Presidency of Bolivia it was a fiscal basket-case, but his government has turned Bolivia’s outlook 180 degrees… and now it is well on the road to success; and Colombia wants to be part of this noble effort in Bolivia.”

“I am sad to say that criminal violence has led to the death and disappearance of thousands of Indigenous leaders throughout the Americas.”

“Indigenous Peoples have the right to criticize the governments of the States in which they live – and NOT be labelled as ‘troublemakers’ or ‘subversive elements’.”

* Vargas Lleiras, Minister of the Interior of the Republic of Colombia:
“A constant and respectful dialogue between States and Indigenous People, it is the only option we have in this Hemisphere as we go forward into this 21st century.”

“For the first time in Colombia’s history the President took his oath of office FIRST before the Indigenous Peoples of Colombia – the landlords of this country, and after this he took the oath in our Parliament; this shows his respect and commitment to Indigenous Peoples.”

“Indigenous Peoples have an entirely different view and interpretation of the words ‘progress’ and ‘development’, and this is why it is imperative that every government maintains the principle of constant communication with Indigenous Peoples in order to obtain their ‘free, prior and informed consent’ as stipulated in International Human rights Laws and Conventions… this MUST be done before any project that will or may effect them is ever started.”

“In 2011, 168 planned projects were discussed with over 500 Indigenous communities in Colombia before anything was done… Indigenous Peoples in Colombia have never been mobilized to such a great extent for dialogue with the National Government in the entire history of Colombia!” 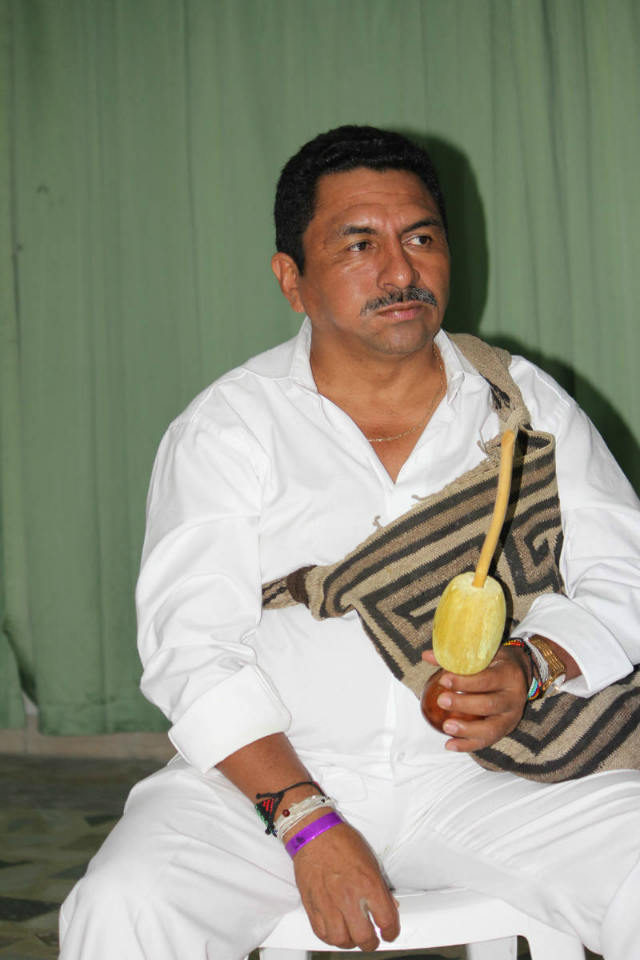 Jaime Arias Arias Deputy High Councilor of ONIC* Jaime Arias Arias, Deputy High Councilor of the National Organization of Indigenous Peoples of Colombia (ONIC):
“We call upon the States of the OAS to honor their commitments and pay their dues to the OAS, only two countries regularly make payments… the other 32 do so only infrequently or never at all; and this is why the OAS often lacks funds to carry out projects that can benefit Indigenous Peoples.

Since these States all deny us our sub-surface mineral rights – which has consigned us to the poverty that we still endure as a result of this inequity…the very least they can do is pay their dues to the OAS so that a tiny fraction of their indebtedness to our many peoples will be able to reach us – like proverbial crumbs that fall off the Lord’s banquet table.” 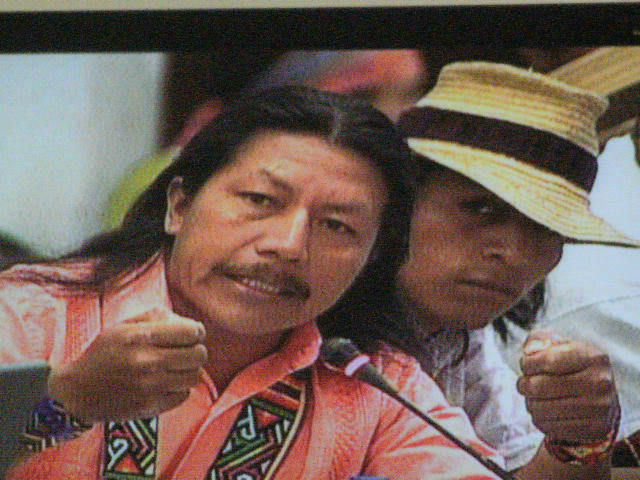 Chief Feliciano of 50,000 members of the Nasa Amerindian Tribal Nation of Colombia* Feliciano, Chief of 50,000 members (25%) of the Nasa Tribal Nation of Colombia (the largest in that country):
“Government spokesmen come before us and give nice speeches, but only ever cosmetic solutions result….never anything serious or equitable for us Indigenous Peoples.

‘Internationalism’ and ‘Globalization’…these are the two key words being used by the Elites of this world to deceive – and which will ultimately destroy all of us Indigenous Peoples!”. 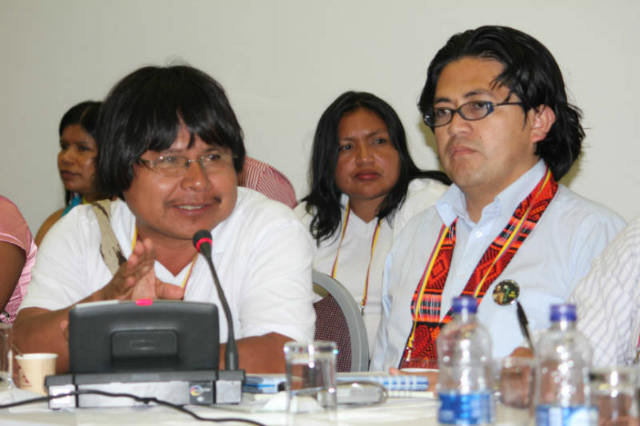 Chief Alberto Achito of the Embera Amerindian Tribal Nation of Colombia* Alberto Achito, a Chief of the Embera Tribal Nation of Colombia:
“Cuba SHOULD be allowed to participate in the OAS… they should not be denied because as the Americans say ‘they do not practice Democracy’ – but rather should be allowed back into the OAS because the rest of the member states DO! Everyone knows that every country in the Americas continually votes to let Cuba back into the OAS and to lift the criminal embargo.

TRUE DEMOCRACY is not the ritualistic holding of General Elections every 5 years, it is the pluralism of a society – where ALL views are taken into account… not a diplomatic exercise of mob rule where the majority triumphs.
If we are truly democratic societies in the Americas as we love to boast – and none louder than the USA…how is it possible that one country can veto the decisions of ALL others?

Are we living under the rule of an invisible de-facto American Capitalist Empire – where money is all that really matters?

We Indigenous Peoples have our own territories and autonomous tribal governments, and International Law has recognized this fact… yet the rich elites come here to ink deals purely to satisfy their own insatiable avarice… and they give no thought or concern whatsoever for us Indigenous Peoples who will suffer the most from what they do in their private meetings and negotiations.”