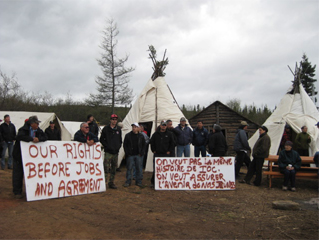 Innu block access to mining projects on their territory

Innu communities are blocking access to two mining projects in northeastern Quebec and western Labrador in an attempt to protect their Indigenous rights and ensure no mining can proceed on their territory without their prior consent.

At the moment, roughly 100 Innu from the communities of Matimekush-Lac John and Uashat mak Mani-Utenam are attending the blockade, which officially began on Friday, June 11.

That number could easily swell if the governments and the two mining companies, New Millennium Capital and Labrador Iron Mines Holdings (LIM), fail to act responsibly. Both communities are members of the Innu Strategic Alliance (ISA), which represents some 12,000 people or 70% of all Innu in the province of Quebec. The ISA supporting the blockade.

On June 9, the Alliance chiefs said they have no choice to set up a blockade, which “complies with the existing Innu traditional juridical system,” because the Provincial and Federal governments are undermining their rights.

“We are open to constructive dialogue with the governments and the companies as long as our cultural, economic, social, environmental and spiritual aspirations are respected. We are not against all forms of development of the territory but we are against all development held without our consent,” stated the Chiefs in a joint statement.

Matimekush-Lac John Chief Real McKenzie and Uashat mak Mani-Utenam Chief Georges-Ernest Grégoire also reaffirmed Innu ownership of the natural resources within their territory, stating, “We have never ceded, abandoned or renounced our Aboriginal rights or our Aboriginal title. The governments therefore have the constitutional obligation to consult us and to accommodate our rights and interests.”

The ISA notes that, in 1927, the Quebec-Labrador border was imposed on them by the British Crown, which created an “artificial division of Nitassinan (Innu territory)”.

The division opened the floodgates for Canada’s standard aboriginal policy, including residential schools, the banishment of hunting Caribou (which the Innu heavily rely on) and, ultimately, the exploitation of Nitassinan.

The region was stripped of its resources in the 1950s and 60s; the Innu barred from exercising their rights and benefiting in any way meaningful.

“Our community will not be fooled like in the 60s. For many years, our territory was stripped of its resources without our consent and without any benefit for our community. When the governments completed their mining operations, [Schefferville] was destined for doom; the governments left it deprived of economic activity and resources and without taking account of our presence and without concern for our rights. If they now wish to take up mining again, they have to do so under our conditions,” said Chief McKenzie, prior to a general meeting last month held to discuss the future of Innu lands.

More recently, Chief McKenzie said the blockade will stay up as long as it takes for the governments and the companies to act. “It’s up to them.”