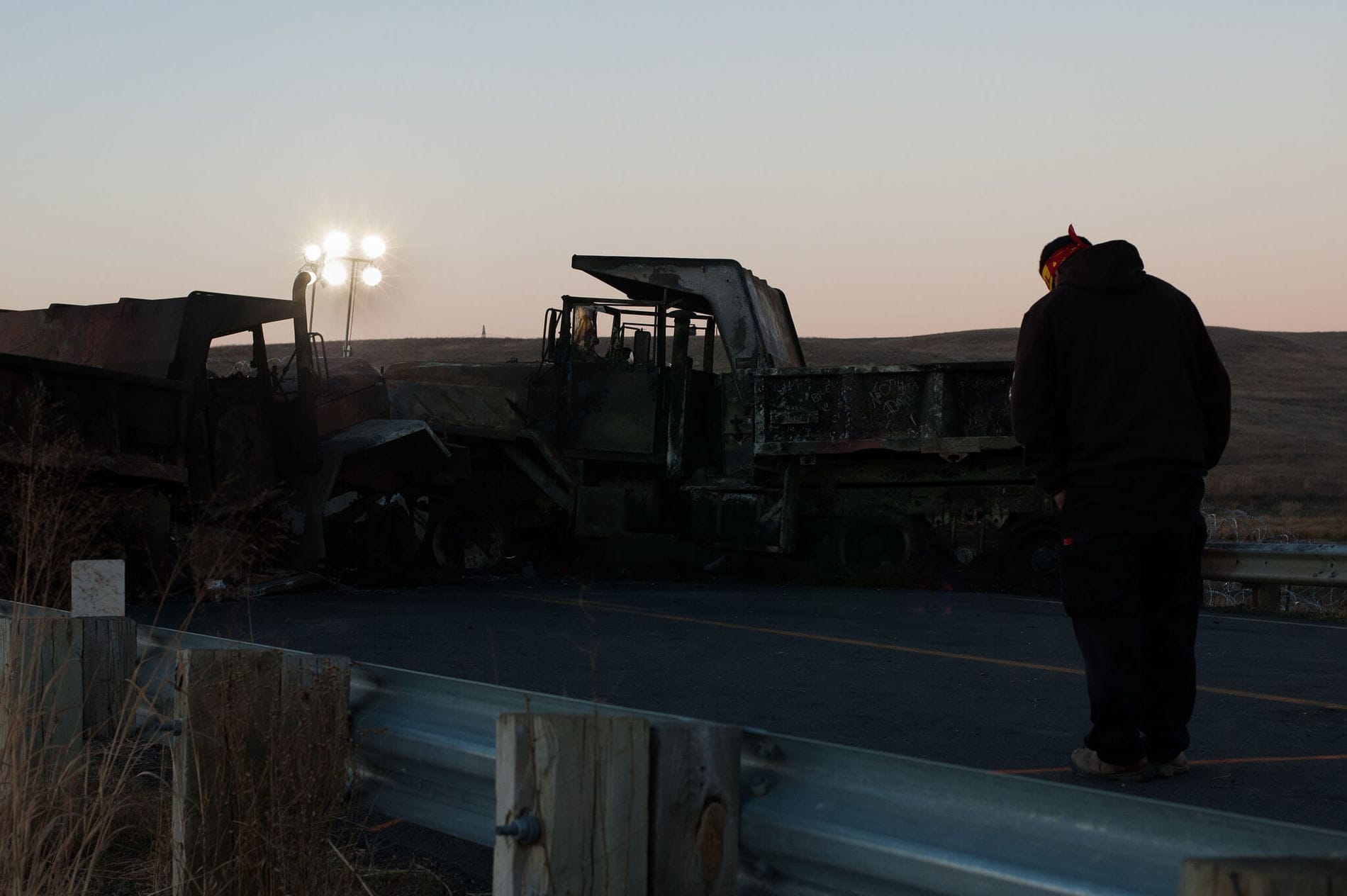 As of November 2016, 76 local, county, and state agencies had deployed officers to Standing Rock. Between August 2016 and February 2017, authorities made 761 arrests. One protester was arrested and slammed to the ground during a prayer ceremony; another described being put in “actual dog kennels” with “photos of the types of dogs on the walls and piss stains on the floor” in lieu of jail. She wasn’t told she was under arrest; she wasn’t read her rights. Once detained, protesters were strip searched and denied medical care. Belongings and money were confiscated, the latter never returned.

Law enforcement officers razed the camp in February 2017. The protest may have ended, but aggression against protesters did not. Law enforcement and prosecutors’ efforts to charge protesters with as serious a crime as possible have become battles to convict them and obtain the maximum sentence possible.

During a Oct. 27, 2016, roadblock protest of the Dakota Access Pipeline at Standing Rock, several fires were set. By whom, no one knew. Prosecutors charged Little Feather of the Chumash Nation, also known as Michael Giron, and Rattler of the Oglala Lakota, Michael Markus, with “use of fire to commit a felony” as well as civil disorder, anyway. The charging documents cite knowledge of  “several fires … set by unidentified protesters.”

Police tactics on Oct. 27, by the way, included the use of pepper spray and armored vehicles. Law enforcement and prosecutors only became more aggressive after President Trump assumed office, at his direction.

Both Little Feather and Rattler opted to plead guilty, not because there was adequate evidence against them but because the mandatory minimum sentence would be 10 years if they were convicted at trial. That was a risk not worth taking: The Guardian has reported that surveys found 84 to 94 percent of the jury pool has prejudged Standing Rock protesters. Little Feather was sentenced to three years in prison. Rattler is expected to receive the same or a similar sentence.

A third protester, Red Fawn Fallis, pleaded guilty to charges of civil disorder and illegal possession of a firearm by a convicted felon. She was accused of firing a gun during the protest, though she said she doesn’t remember doing so. The gun in question was owned by an informant who allegedly seduced Fallis. Despite these obvious flaws, she and her attorneys opted not to risk trial, citing both anti-protester sentiment and lacking disclosure by the prosecution. She received a 57-month sentence.

The ongoing experiences of Standing Rock protesters are all the more horrifying in contrast with the recent pardon of Dwight and Steven Hammond. Trump pardoned the pair, who’ve long “clashed” with the federal government, at the behest of a “tycoon” friend of Vice President Mike Pence. Both had been convicted of setting fires on federal land for a 2001 fire, while only Steven was convicted of a 2006 fire. When the mandatory minimum sentence for the pair—who originally benefited from pro-rancher bias—was imposed on appeal, it sparked an armed standoff led by another famous family of anti-government extremists, the Bundys.